"TALKING of timber vessels" goes on friend Phillimore, after telling how the Albacore came up the lake from Kingston at twelve miles an hour, dipping her mainboom all the way, "if I do not tire you I would like to say something of the happenstances on board another, one of the best of her class, a three-and-after, as we used to call them.

"The captain's daughter, a girl of twenty, was with us. It was no Wreck of the Hesperus affair, though at times the daughter might have wished her father 'lashed to the helm all stiff and stark.'

"The captain in this vessel when I shipped was not the one who had her when she capsized later and drowned her whole crew, so there is no moral intended in what I have to tell. This was a different man altogether, as I say, and his son was mate with him—a good seaman but given to stunts that at times irked his father. I pass over the round-to going in to Garden Island one Sunday afternoon, all the crew but myself having their homes there, and eager to be ashore. Captain and mate, father and son, had a difference of opinion there that produced oratory as colorful as a purple squall.

"Perhaps the round-to rankled in the captain's mind; in any event a coolness had sprung up between him and his son and heir, also first mate. The latter's way of taking the vessel into Lock 1 at Port Dalhousie perhaps was a culmination; they quarreled and son quit. At St. Catharines another first mate was secured, a good sailor, though hard boiled, but it said something for him, or the captain's daughter, that his man-handling inclinations were subdued and he was the real master for the rest of the trip. The vessel had a second mate and four men forward.

PULLED THE BRAKES OFF

"Those who knew the captain said he had not taken a drink in years while his son was with him, but at Port Colborne he did get drunk, bringing a well-filled jug aboard. When empty it was replenished at whatever port he could make excuse to drop anchor.

"It was the tug Sweepstakes of your Bigler chanty that towed us through the rivers, and with a slant up Lake Huron we rounded Point Aux Barques and stood over to Tawas Bay. Here the captain, gazing aloft, opined there was some bad weather in the offing. The jug was empty so he ran into the bay and the killick was let go, Fed up on the many boat trips ashore already, being one of a crew of four in the forecastle, I asked the first mate to let me stow the fore-gaff-topsail and be out of her. That was about finished when there came a bawl from the captain for 'Bill,' and though about suppertime, we had to take the yawl boat ashore, the daughter with us as usual, and pulled up on the beach.

"Some money was given the second mate to buy supper ashore and after some conference we refused to take it, hoping to get the captain away earlier. After a time he was found in a tavern, at whose bar, about as long as that in the Scholes Hotel on Yonge street many years ago, was lined up a tough crowd of lumberjacks, drinks being bought for the crowd.

"The captain was Scotch and mellow when half seas over, as he was then, and the situation, especially for his daughter, looked bad. We skirmished around, found a timber operator of some authority who went back with us and threatened to wire the owners, very respectable people in Kingston, unless the captain went back to the vessel at once, which he had sense enough left to do. The cook got us some supper about ten o'clock.

"At our loading place in Saginaw Bay, Pinconning, I think, anchor was let go about a third of a mile from land and the timber rafted out to us to be hoisted into the hold and on deck in the usual way.

"How many have ridden in or seen a buckboard?—that ancient implement of transportation, slats bolted to front and rear axles, which made some spring! We got well acquainted with such an animal before we got away.

"Loading finished and all our provisions running short, the rafting foreman drove the captain in his buckboard to a village four or five miles back to replenish the stock. At anchor watch, about midnight, a hail was heard and boat crew sent off to bring the supplies aboard. As hams and sides of bacon came over the rail they looked the worse for wear, while cabbages might have served as footballs.

"All these goods had had a rough passage, One basket held a fine omelet, the cook next morning showing us three whole eggs out of what had been six dozen. The wonder is that buckboard and crew arrived at all; the horses had been run all the way back over a corduroy road, both driver and passenger drunk as lords. The filled jug was intact. They must have had all they could hold before they began the return trip.

"When picked up by a tug off the rivers, coming home, the tug's captain was told to stop at Detroit. Tows often did that for some supply, rounding-to, the tug's power holding the tow against the current. Nearing Detroit, with the wind fair and the foresail hoisted to help the tug, the mate, hidden by the sail, stood in the bow and signaled the tug not to stop. Having explained why a megaphone call from the tug said it couldn't hold us against the current, so we got past this filling station.

MORE THAN THE PUMPS DRY

"When our towline was let go in Lake Erie we entered Pigeon Bay on the starboard tack and just off Leamington there came a sudden thought of leather for the pumps. Again the anchor went down and overworked yawlboat had us ferry the captain ashore. While looking for pump leathers, in a tavern at that time near the dock, the town itself being . a mile away, was met the captain of a small vessel loading grain, at the dock. It was near twelve o'clock when we carried our own skipper to the boat, a heavy man and heavier when drunk, we rigged a tackle to hoist him aboard, then all turned in. The grain man got aboard his schooner under his own power.

TOO MUCH FOR THE MATE

"The mate by this time must have thought virtue should have its reward, and with the anchor watch lowered the boat in very early morning, went ashore and got full, bringing back a bottle or two of bad whiskey. At breakfast all hands were drunk but myself, being young and liquor virtuous up to that time. The woman cook serving the table on unsteady feet, with an expletive that would not look good in print, threw a cup of hot tea in the face of the second mate, whom she hated, and breakfast, broke up in uproar. Sufficiently sobered as the day passed we got the anchor up by nightfall, reached the Welland canal and had a good run down Lake Ontario. All that saved the captain from going into the home port drunk was one of the crew finding the jug and throwing it overboard before we got there.

"I had enough, wanted to quit, but was urged to go back as far as the canal, perhaps in fear I might talk and it come to the ears of the owners. The captain's daughter, I believe, true to the tradition of women not to gossip, did not tell the story. So I will be equally gallant as to her name and her father's, and the vessels, although it makes no difference now. This was near sixty years ago. They were all very well known. The schooner capsized later, when in other hands, and drowned a whole family of hard-working sailorfolk, out of Garden Island. She was dismantled and used as a tow barge for a number of years. The steam barge which towed her was lost in Georgian Bay with all hands, but the old timber schooner rode out the gale.

"'And when we get to New York town,

It's there we'll drink and our sorrows drown,

And good morning ladies all.'"

GULL ROCK LIGHT a hundred years ago, as W. H. Bartlett painted it on his British North American tour in 1839. The light was evidently at first from a brazier or cresset, but with the exception of the means of illumination the lighthouse is the same to-day. It is now lighted automatically by acetylene compressed in acetone, operated by a sunvalve. 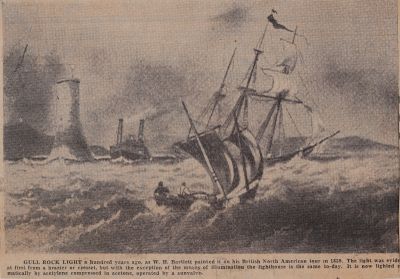