CAPT. R. J. EDMUNDS, ex-Mayor of Port Hope, and the badge he has made for Port Hope's adopted baby, in his eighty-fifth year.

PORT HOPE'S motto is "Spes Ancora Tuta," which, literally interpreted, means "Hope, the safe anchor." The reference is Hebrews VI., 19, "which hope we have as an anchor of the soul, both sure and steadfast, and which entereth into that within the veil."

At the age of 21 Capt. Richard J. Edmunds, still hale and hearty in the town, had his captain's papers and sailed what was then the largest schooner out of the port, the "Mary Ann Lydon," named after the daughter of the mayor of the town, John Lydon, who also kept a grocery store, an important item in the economy of every lake port.

Capt. Edmunds became mayor of Port Hope himself, and still, at the age of 85, takes a keen interest in all concerning the pride of Durham County.

He has a hobby which fills many happy hours for him, that of wood carving and fret-saw work. And so it was natural to turn to him to execute the letters and figures in the coat-of-arms of the town of Port Hope, which is to be presented to the town's adopted minesweeper. H.M.C.S. "Port Hope," now on active service, Lt. W. Turner commanding.

The arms show Miss Port Hope with a firm grip on the "safe anchor," on the deck of a solid pier, with lake schooners and a tree-crowned shore for a background. In the foreground are sundry cubes which represent both the bales of merchandise and the lumber piles for which Port Hope was famous.

Mr. George Garnett, of Port Hope, laid out the work which Capt. Edmund s executed. Capt. Edmunds, who is a total abstainer, says the kegs in the coat-of-arms are not rum kegs, but tar barrels. Capt. Edmunds should be an authority on the latter commodity.

Seventy years ago, if memory serves, young Dick Edmunds was sent aloft in the boatswain's chair with his tarpot to "tar down" the triatic stay of the schooner Garibaldi. She was then hemp-rigged, wire rigging being still a novelty, although it was gaining in favor. Hemp had to be tarred to preserve it.

The spring stay, or triatic stay, as lake sailors call it, runs from masthead to masthead. Young Edmunds hauled himself along the stay slung in his chair and tarring as he went, but when he came to the rise at the masthead, owing to the steep angle caused by his weight on the bight of the stay's slack, he could not make the grade. The stay was so slippery with the tar which he had applied that he was like the frog in the well, sliding back whenever he rested as much as he had gone forward by strenuous exertions.

It looked as though he would spend the rest of his life hanging seventy feet above the Garibaldi's deck. But the mate, who should have provided him with an outhaul before he started, managed to heave him a bowline and haul him across that slippery black thread to safety.

Capt. Edmunds sailed many vessels "out of Port Hope," Like Capt. Peacock, who tops him by a few years, he has become an ornament to his town. Some of his schooner commands besides the Mary Ann Lydon were the green Aurora, the Picton, the Annie Minnes, the L. D. Bullock, also black, the E. H. Rutherford and the Jessie Drummond. These last named were three-masters, and they were black, too, black above and green below. In fact black-and-green trim seemed to be Capt. Edmunds' favorite color scheme, although the L. D. Bullock was a very neat paint job in black and lead color as was the Annie Minnes. The Picton may have been green and white when Capt. Edmunds made 44 trips in her in the season of 1883, but she was black and lead color later. The Mary Ann Lydon was white with a green petticoat when she first came to Port Hope in Magistrate J. J. O'Connor's time. But in the twenty years Schooner Days knew her she was always black above and green or red below. 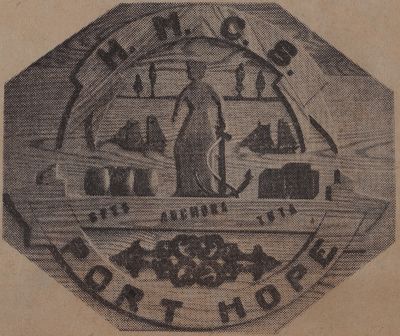