HOW come the "Balsam?"

So, quite pertinently demands a Milford Bay, Muskoka, reader of Schooner Days. Mr. Wm. H. Wray, enclosing a clipping from an American magazine, seemingly of early in this century, with the inscription

It is a neat piece of drawing of the style of forty years ago, and it shows a schooner at anchor on a wooded shore, hoisting in stores from a large launch or quarter-boat lying alongside. The wooden davits which carry it are empty. Another launch or tender floats astern. The stores are coming aboard in a large barrel; perhaps powder. The schooner's mortar, a short wide-mouthed gun used for lobbing shells short distances, shows above the rail. Another gun is run out from a port cut through the rail abaft the forerigging. There is another port open amidships, but it appears to be an entry port, with a ladder below it. Ten figures are shown, so small that all that can be said of them is that there are no indications of the white gob hats under which the 20th century American navymen see the world.

The unusual feature about the little picture is that it shows bunches of foliage at the schooner's mastheads, whole evergreen trees, and this is what prompts us the initial question. The vessel's topmasts have been stuck and housed and the trees are lashed to the heads of the lower masts.

Mr. Wray's guess may be better than Schooner Days, but ours would be that the artist was depicting a bomb-vessel at anchor in enclosed waters, with evergreens lashed to her mastheads to precent her shining spars from betraying her presence. It was that way that the blockaded schooner Nancy was discovered by the invaders at Wasaga Beach in 1814, although she had been hauled two miles up the Nottawasaga River to escape them. Had her masts been festooned with firs they would have merged with the rest of the forest growth.

Camouflage was not an invention of the Great War, and this particular form of it, the use of forest trees, was practiced as early as 1776 on Lake Champlain in the war of the American revolution. When the rebel gunboat or "gundelow" Philadelphia was raised in 1935, just as she was when she sank under British broadsides in the battle of Valcour Bay, a hundred and fifty-nine years before, in her gunwales were found the remains of small hemlocks and spruce trees which had formed a screen behind which her oarsmen and marksmen worked and fought. They had also helped disguise her when she lay against the forest background of Valcour Island and the shores of Lake Champlain.

The drawing referred to is signed "R. G. Skerrett, 1904." It is not known whether Mr. Skerrett was illustrating a particular incident, or only a general type of mortar-schooner as used in coastal defense. The American Navy was not using such forms of coastal defense in 1904, as far as can be learned, so the drawing probably does represent a particular incident earlier in American history.

Magazines at the date given were recalling the American Civil War of forty years before, and the type of vessel shown would fit that period. The artist was a sound draughtsman, but we do not know what his source material was. The lines and rig of the schooner favor a later period than the War of 1812, which was also a favorite one for magazine treatment forty years ago. The vessel appears to have wire rigging, which was just coming into use in 1860, and the absence of headstays from the main- mast to the windlass bitts also points to a later period than 1812.

But the "balsam" was used for other purposes than camouflage in the sailing navies. One recalls a very, pleasant three-color print entitled something like "Christmas in the Old Navy." It showed square riggers like Old Ironsides (it was another American print) at anchor in a snow-mantled haven, with smoke rising in pillars from the chimneys of each longshore home, and the crews pulling ashore on liberty day, with red bandana bundles of seashells and scrimshaw work, and monkeys and parrots on their shoulders, all souvenirs of a long cruise just ending. In the bow of each shore-coming boat was a New England spruce tree, and little spruce trees decorated each masthead and every yardarm of the anchored ships. A spruce tree even took the place of the jackstaff at each bowsprit end. A fancy picture, of course, but one indicating a happy custom of celebrating a happy occasion.

On the Great Lakes Christmas and Christmas trees were important items in the sailor's year. Especially "Up Above," as we called the Upper Lakes. By the middle of December the greasy Chicago Creek around Twelfth street bridge would begin to fill up with schooners, each with a Christmas tree at the masthead, as high as the roofs of the ten-story buildings which were the rudiments of Chicago's skyscrapers. In this case the evergreens were anything but camouflage. They were clamorous advertisements of the fact that the schooners had Christmas trees for sale.

If from curiosity you followed the sight of these evergreens, growing apparently from bridge-trusses and rooftops, you would find the schooners in the creek with trees lashed in their rigging on both sides, and their booms topped up as for lumber reefs, above deckloads of greenery. They would be retailing Christmas trees for 25 cents each, the trees having cost them nothing in money, but a lot of painful and perilous labor. To go "polacking" for Christmas trees on the Michigan or Wisconsin shore in zero weather could be one of the wettest, coldest and most dangerous jobs in the catalogue of lake hardships. December sailing was always dangerous, because the best-found schooner could get iced up, or lose herself in a snowstorm, and with the reefed sails, high deckloads, and light cargoes the best of them were practically unmanageable except with a fair wind. It is a favorite story with fiction writers, the fate of the Christmas-tree ship that never came home, but it was all too true, all too often.

Besides, in the wild and wicked west which Chicago queened around the time of the Great Fire (1871) they sometimes shot timber pirates first and tried them after, and if the inquest showed they weren't timber pirates at all but Christmas-tree cutters the verdict would still be suicide-but-don't-do-it-again.

AMERICAN REVOLUTIONARY GUNDELOW "PHILADELPHIA," 1776—The evergreens were stuck in the rail, butts up, to screen the rowers from sharpshooters. The stems were found there a hundred and fifty-nine years afterwards, The curious combination of thirteen stripes with the crosses of St. Andrew and St. George, shown at the stern, was the early revolutionary flag. 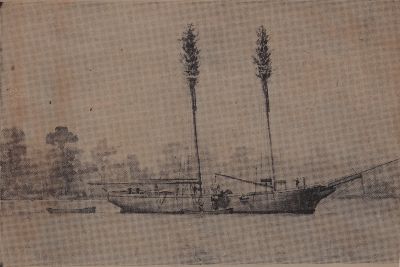