REFERENCE to a "fouled anchor" brings up a point which some of the able seawomen of the W.R.C.N.S. have been raising. Their housewifely souls revolt at the suggestion of untidiness anywhere — and in the navy of all places! Fouled anchor, indeed! Polish it immediately!

Aye, aye ma'am. But, begging your parding, ma'am, it was the Jook of York, him as became James II, as started this here fouling, ma'am, they do say.

The fouled anchor has been in the admiral's flag for two hundred years and like as not James II designed it in Pepy's time. He was a good sailor if a poor king.

At sea, "fouled" seldom means dirtied, soiled or muddied. It usually means entangled. In the case of an anchor used symbolically, one might say enwreathed. The "fouled anchor" in the admiral's flag — and in the W.R.C.N.S. Christmas cards — and on naval badges and buttons — and in floral emblems — is decoratively enwreathed with a generous section of cable, passing through the ring and around the stock, shank, arms, flukes and crown in turns and bights, which are loops and twists to the landsman. The fouled anchor is clean as a new pin, but not as bare. Every good seaman shudders when he sees a "barren" anchor, that is, one with no attachment. He knows how easily it is lost beyond recall. But the fouled anchor — she is with you for keeps.

As in heraldry, with its "propers" and "sinisters," "ors" and "bearings," so in seamanship — words are used technically with meanings sometimes quite different from those attached in ordinary conversation.

ANGUS WALTERS, late master and owner of the champion Bluenose, reports in from Lunenburg on the last tide, all well on board, so our Christmas card log is complete. Angus has never missed in twenty years.

FOURTEEN-year-old Bill Fenwick, 18 Day avenue, in the second form at the Central Tech., has made a fine model from plans of the Great Republic. Only, being 100 per cent. Canadian and a lover of Canadian history, he has named his model ship "Nancy," after H.M.S. Nancy in the Royal Ontario Museum, heroine of the fight at Wasaga Beach in 1814.

FROM Commodore Ernest A. Bell of the Royal Nova Scotia Yacht Squadron, comes a deserved tribute to the late George H. Gooderham, fifteen times commodore of the Royal Canadian, buried on Christmas Eve.

Before quoting Commodore Bell Schooner Days would like to say that Commodore Gooderham's long connection with yachting was more to his credit than perhaps even his heartiest eulogist has guessed. While keenly enjoying both the competitive and the social side of the sport, Commodore Gooderham's constitution often made participating in it more an act of courageous devotion to duty and family tradition than a relaxation. He was by nature modest and retiring and playing the bluff and breezy host to strange yachtsmen could be torture to him. But no one was more hospitable. He loved to do good by stealth, and blushed — and swore — to find it fame.

Despite his inherited business he was temperate in habit and his goodwill in keeping down abuses of liquor was often misunderstood. No one offered better cigars or better whiskey than George H. Gooderham and no one was ever more courteous than he in accepting their polite refusal.

His earliest recollections of yachting were the miseries of seasickness while being taken out to board his father's yacht Oriole I in Toronto Bay. It is doubtful if Mr. Gooderham ever became immune from mal de mer, but from a sense of duty he persisted in yachting, in the grand manner of his father and elder brother, owning and sailing Oriole after Oriole until he had to lay the fourth one up and sell her because he could only get about in a wheel chair.

Even so, he would have himself wheeled to the yacht club lawn as late as last summer and look over the grounds, the buildings, the fleet and the moorings and the whole magnificent plant, with intelligent appraisal. He was still at heart chairman of the committee of management, as he was ex-officio and by courtesy. It is no derogation of his successors or of the other nineteen hundred and seventy-nine members of the club to say that he made the Royal Canadian Yacht Club what it is. There will never be another "Commodore George H.," though the long line of honored Gooderhams continue ad infinitum.

To get back to our interrupted Commodore Bell, that officer says:

"I was grieved indeed to notice the death of Commodore George H. Gooderham today and immediately brought the matter to the attention of the executives of the Royal Nova Scotia Yacht Squadron. These gentlemen agreed with me that the Royal Nova Scotia Yacht Squadron should pay Commodore Gooderham's memory, in view of his outstanding contribution to the yachting fraternity in Canada, the tribute that we reserve for our flag officers and former flag officers. Vice-Commodore Jones, who is general manager of the Eastern Trust Company, therefore instructed his Toronto office to send forward a floral fouled anchor.

"The Yacht Squadron of course is merely marking time now. We are not allowed to sail yachts in the harbor and some seventy or eighty members are in the different services. One of our members, Lieutenant O'Hagen, received a bar to his George's Cross. I understand the last citation was for taking the plugs out of a mine that was bumping around a destroyer. He sat on top of the mine while he did this work."

CAPT. TROWELL, buried in his home town of Toronto this week, got his captain's papers with Capt. John Williams at the old General Post Office on Adelaide street in March, 1884, among the first issued for inland waters.

"Up to the end of 1883," says Capt. Williams briskly, "a coasting license was all we needed. We got that at the Customs House by having anybody witness it, and it was good for anywhere in the Dominion of Canada. In 1884 masters had to have certificates. We were put into a room at the post office, after being searched to see if we had any book information in our pockets. Three examiners, one from Toronto, one from St. Catharines and one from Kingston, gave us problems in courses which tested our local knowledge and ability to read chart and compass. We had to pass eyesight tests, and to give recommendations from our employers. Everything was fair and we went through with flying colors. Johnny Trowell wanted a ticket in steam and got it on the propeller California; I wanted one in sail and came out certified master of the little schooner Paddy Young, which I had sailed in 1883 for Mr. Charles Robinson. I have the gold watch yet which he gave me at Christmas time that year."

LORD HIGH ADMIRAL'S FLAG AT THE FORE OF AN 18th CENTURY FIRST-RATE, WITH THE ROYAL STANDARD AT THE MAIN, FROM A WOOD CUT IN JOHN HAMILTON MOORE'S CONTEMPORARY INSTRUCTIONS FOR NAVAL OFFICERS. IT SHOWS THE DESIGN OF THE "FOULED ANCHOR" VERY CLEARLY.

A-1 COMMODORE'S FLAGS ALL STRUCK

Typical yachtsman for forty years, the late George H. Gooderham is best expressed in this portrait by John Russell surrounded by his successive flagships - VIVIA, CANADA, CLORITA, ORIOLE III, ORIOLE IV.- From "Annals of the R.C.Y.C., 1852-1937." 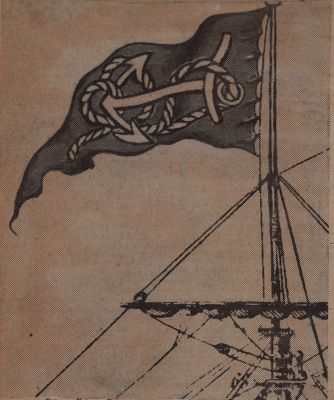