THE Prince Edward schooner British Queen, one of several so named, carried square timbers for Oswego breakwater from the Queen's Wharf, Toronto, eighty years ago. The breakwater was the beginning of a new "outer harbor" and gave more shelter in the inner harbor, but the sea it set up in a westerly gale could be felt five miles out in the lake.

RIGHT TO THE END

Our friend the police chief in Oswego sends us an account from the Oswego Palladium-Times of the last battle with the backwash for 1942 in December.

With the many breakwaters and piers and the extensions into the modern harbor works the main lighthouse of Oswego harbor is now at the outer end of the west arrowhead breakwall, half a mile from shore and almost a mile from the original Oswego light. We remember it on a decaying crib fifty years ago, so far inside the river mouth that it looked like a fire hall hose tower. The main light is so far out that in blowy weather the keepers are isolated. Dan Sullivan was marooned there in 1912 for a week, a fifty-mile gale blowing and no one able to get near him. James A. Sadler, an Oswego contractor, listening to the pleas of Sullivan's wife, got his fourteen-foot rowboat out and rowed to the foot of Ontario street, loaded her with groceries and the morning paper and pulled through a blinding snowstorm to the lighthouse, hitting it on the dot. The harbor entrance was then from the east and Mr. Sadler almost went to destruction crossing it. He was soaked through. Mrs. Sullivan had watched her husband's signals daily from the shore and when he signalled: "Out of grub and don't forget the newspaper, she—and Mr. Sadler—acted promptly.

Lest Dec. 4th, Karl A. Jackson, first-class boatswain's mate in the coastguard and keeper of the main light, signalled after three days alone in the lighthouse that he wanted relief, so the 38-foot picket-boat, power driven, pushed out from the coastguard station with two reliefs and plenty of crew to fend her off at the difficult landing place.

The sea was running high, but the boat made the lee of the light, landed two men on the breakwater for Jackson's relief, and picked him off, though he had to jump for it. Little did any of them think Jackson was jumping to his death when he landed in the cockpit. The picket boat then backed away from the wall, to return to the station. When the clutch was pulled out of reverse and the engine put in forward gear it stalled. The boat drifted rapidly towards the east light, in a tremendous sea, between the lake waves and the river current, the engineer working furiously to get her started. Twice the engine coughed and sputtered out. Lieut. A. J. Wilson, in charge—he was Oswego's port captain—ordered the anchor over the bow. It weighed 125 pounds. Two men crawled out of one cockpit on to the ice-covered fore-deck and got it over, the boat pitching and rolling violently.

The anchor held—for a minute and a half. Just long enough to slew the launch into the trough of the sea and bury her under an avalanche of water. The inch and a half line parted. The boat spun away, the plaything of wind and current.

If the north wind had had its way she would have blown into the harbor. If the current had prevailed she would have washed to possible safety past the east light. But neither wind nor current won the war and the backwash settled it by picking the boat up and tossing her on the rocks at the very end of the breakwater, where the east light stands, rolling her over as she struck. Of the six men on deck all, including Jackson, were drowned. He clung to the broken line as the, shattered hull dragged past the fatal rocks, but lost his grip. The two who were caught below—one working vainly on the pump and engine and the other in the wheelhouse by order — were spilled out and tossed on to the breakwater. Lieutenant Wilson, buoyed up by the air in his oilskins, swam strongly, but could not make it. Mixon, second in command, and one of the survivors, tried to pull him out of the icy water but could not lift him.

"Don't try it; save your own life, John," said the port captain quietly, and died. The lake whirled him away.

The two men left scrambled for sixteen hundred feet along the ice-glazed rocks of the breakwall. Five hundred feet from the end the coastguard motor lifeboat lay tossing in the surf, unable to land to take them off, but with a skiff in tow for that purpose. Two men in the skiff tried to carry a line but the line parted or they lost the end of it and their boat was dashed on to the breakwater, too.

It was completely smashed but the two coxswains in it got up on to the rocks. Boatswain Burnet, in charge of the motor lifeboat, after some clever maneuvring, picked all four men off the breakwater in the big boat, after an hour's effort. Before bringing them in an attempt was made to secure the body of Lieut. Wilson, which still floated. A seaman named Cisternino dove off the lifeboat with a line and reached it but was so numbed by the cold he could not hold it. He almost perished himself before being hauled back on board.

The reason why Oswego was fatal for so many sailing vessels in the two hundred years it has been a sailing port is that three natural forces, all hostile to the mariner, have long been in league, always against the mariner, with a fourth added, of artificial origin—backwash from the breakwaters.

Oswego is near the southeast corner of Lake Ontario. Nearby the east-and-west shore of the lake turns and runs almost due north. So west and northwest winds, which have the widest sweep on Lake Ontario, pile up tremendous seas against the Oswego corner and the rebound from the stony coasts is like roof peaks. Against this pours in the Oswego River, plunging over a long series of falls and entering Lake Ontario running nine miles an hour at times.

Steamers with enough power can either take Oswego or leave it and run for the St. Lawrence if conditions are bad. Since the sailing vessel has passed out few wrecks have been charged up to Oswego's account.

The schooner Albacore of St. Catharines, was the last of a long string of sailing vessels to end on the beach under Fort Ontario, to the east of the Oswego harbor entrance. How she passed out was told by Capt. Charles Redfearn, her master, at the Mariners' Service at Colborne this spring. We shall give it next week. 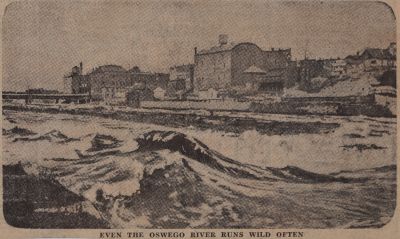