Search (Advanced) → What's New → Details
Wrecked at Oswego was the fate of many - How 'Albacore' Went: Schooner Days DLXXII ( 572)

How often has Schooner Days had to end the story of a stout laker with the notation "Wrecked at Oswego!"

That was the end or experience of dozens of old lakers. One recalls naturally enough, the first vessel he sailed in, the Albacore, which was wrecked at Oswego in 1900. She ran the Fred L. Wells and the T. R. Merritt a close race for the distinction of being the last sailing vessel wrecked there, and won it. The Merritt struck, rolled over and came in on her beam's end some miles above the harbor, in the same gale.

Young Captain Charley Redfearn, now long retired from his last command the big Canadian National car ferry Ontario No. 1, was sailing the Albacore at the time. Before midnight the mate called him from his watch below, and said it was blowing pretty hard, and he thought he had better get the mainsail in, for it was a very heavy sail to handle. When Capt. Redfearn had turned in it was a light moderate evening and quiet, though the glass was low. We were in for a backlash of the hurricane that destroyed the City of Galveston.

They put the crotchtackles on the mainboom and got the sail down between the lazyjacks with great difficulty, but that was not sufficient relief. The Albacore flying light, was tearing off 12 knots and the remaining sails threatened to leave the boltropes, so they ran down the outer jibs and started to settle the foresail. Captain Redfearn took the halliards, which was a two-man job. She was rolling hard now, and in one surge the throat halliards jumped the thumbcleat and took Captain Redfearn aloft with them, burning the skin of his wrists and forearms. It was as though he had been flayed alive, but in spite of these terrible burns he saved his men from death under the descending gaff. The foresail was badly torn before they got it stowed on the boom. Then the fore staysail blew clean out of the boltropes. The new standing jib was the only sail left. It held and saved the ship from losing steerage and broaching to.

By this time the lights of Oswego whither the Albacore was bound, were shining up ahead, and in a few minutes the schooner was racing past the end of the outer breakwater. Steam went up in the donkey boiler, and she blew for a tug. The big harbor tug was away with a tow, but the late "Hunky" Scott came down from inside with the little harbor tug he had, and as the Albacore rounded up he caught her line and tried to drag her into port across the wind and against the river current.

She sagged off to leeward, taking the tug her. Hunky Scott remembered what had happened to the Oswego tug that tried to drag the Flora Emma in off that same lee shore. She got into shoal water herself, bumped the bottom, burst a steam pipe, lost the FLora Emma and washed ashore herself, a complete wreck, with her captain drowned and the vessel she had tried to save smashed to as many pieces as the cargo of lumber she had on deck.

Perhaps another ten minutes trying would have got the Albacore in, perhaps it would have put both tug and schooner on the beach. The tugman would not take the chance. He put the axe to the towline, Captain Redfearn was not surprised or bitter when the Albacore blew sidewise across the tug's stern lantern and raced for the beach under Fort Ontario. He was so burned up already by the frightful rope burns on his arms he had no indignation left. He knew Hunky had used his best judgment, and that was that. He called to the crew to hang on to windward, so as to be clear of falling spars, and the next moment the Albacore crashed on the boulders.

Her blocky bows of four-inch oak plank came down with one hard crash, and she slewed around broadside. Her jibboom was pretty well over the beach when the racing waves struck back in the dragging undertow. When the seas broke she seemed hundreds of yards out. She came in almost on the Oswego Lifesaving Station's doorstep. In next to no time the lifesavers had shot a line with their rocket gun. It was made fast to the foremast and the breeches buoy was hauled out. The woman cook was first to be saved, Captain Redfearn, with the flayed arms, the last.

He was rushed to Oswego Hospital, treated for burns and shock and kept all night. Next morning, bandages and discharged, he left the hospital. First man he saw on the windswept street was the bearded Captain Dolph Corson, of the T. R. Merritt.

"Hello Captain, where's your ship?" asked the whiskered one of the beardless boy.

"So's mine, said Dolph ruefully. The schooner T.R. Merritt was the finest ship he had ever had. She was a hopeless wreck five miles to the westward.

The Albacore experience was an example of what happened to dozens of ships, both Canadian and American, at the mouth of Oswego harbor.

Others besides those already mentioned were the Baltic and Daniel G. Fort, Canadian and American, lost on successive nights in 1894; Caroline Marsh, from Port Hope, lost in 1891; Snowbird and Wood Duck, both ashore the same day in 1880, and both got off at this time although they perished later; the F. E. Tranchemontagne, D.M. Foster and the Two Brothers of Port Hope, which came to grief on the breakwater. The Lochiel was struck by a heavy sea at the harbor entrance and had her cabin trunk stove in, her binnacle washed overboard and one man killed by the jibbing of the foreboom.The Jessie Drummond had a similar experience once, her woman cook being almost drowned in a flooded cabin.

The B. W. Folger and the Tranchemontagne are reputed to have jumped the pier like steeplechasers, but this does not seem to be authenticated. At any rate it was not the case when they were lost. Their deaths were 20 years apart. When the Tranchemontagne struck the pierhead she filled and sank, her crew taking to the rigging. Ed Cook of Milford was washed overboard and grasped one of the deck boxes for provisions or gear, which had been jolted loose. On it he was thrown over the breakwater into the harbor by the following sea as it burst, which gave rise to the South Bay legend in Prince Edward County that "Ed Cook rode the Oswego breakwater on his trunk." Sailors seldom took sea chests with them in lake schooners, usually carrying their belongings in a bag called a "turkey." There was no room for chests in the lake forecastle and little enough in the cabin. The difficulty was in getting them down the scuttle, which was made small to keep out the water.

The B.W. Folger recovered from whatever experience she had at Oswego and lived to really ride the pier at Great Sodus. She was light, drawing four feet with her centreboard up, and jumped clear over the pierhead in a big sea. She was ultimately burned at Kingston.

SNOW BIRD and WOOD DUCK, both Canadian schooners, on the snowy beach at Oswego after Gale of Nov. 6-7, 1880.

Her back broken on Oswego's boulder beach, the BALTIC of Wellington Square, watches the close-reefed CLARA YOUELL making the entrance - December, 1894

*Last wreck of a sailing vessel on the rocks below Fort Ontario was the schooner Lizzie Metzner on October 17, 1916. 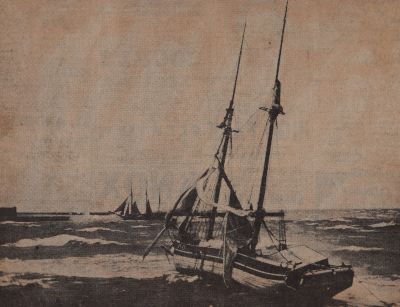