SPEAKING of the last schooners wrecked at Oswego, the T. R Merritt and "our own" old Albacore, it is a curious fact that Capt. John Williams followed these vessels down the lake the day after in the Straubenzee, and had nothing better than a good breeze. The first he knew of the wrecks was the sight of Capt. Redfearn, of the Albacore. with his bandaged hands. He needed their dressings renewed. With an older man's tactfulness Capt. Williams forbore questioning, and busied himself renewing the dressings according to the instructions the hospital nurse had given. Later, when another captain growled that "this came of too much white shirtsleeves on the cabin top"—young Capt. Redfearn was a neat dresser—Capt. Williams said, calling the growler by name, "Our time hasn't come yet, that's all." And soon afterwards this same captain was knocking at Capt. Williams' door for shelter, with the water dripping from his clothes, and his own vessel pounding to pieces like the Albacore had done.

Years before this, when mate in the Clara Youell, Capt. Williams sailed through a great mess of scattered lumber tossing in the backwash off Oswego breakwater—and there on the beach, on the far side of the east pier, was all that was left of the old French-built brigantine Fleur de Marie, which had failed to make the harbor, after losing her deckload outside.

"By gravy, boys," said Capt. Curphy, of the Youell, "she's jumped the pier to get where she is, and thrown her deckload off doing it!"

This gave rise to another legend of another vessel having hurdled the Oswego piers. From the position of the wreck it looked indeed as though this was the case, but the Fleur de Marie had missed the harbor entrance, lost her deckload, and driven in on the far side of the pier, while the deckload, showing no more surface to the wind than a raft, had been held in the backwash by the current of the Oswego River, which sometimes runs out nine miles strong.

The Fleur de Marie was a clipper bowed vessel, black above and red below, built down the St. Lawrence at Lanoraie in 1853 and brought to Lake Ontario for the growing grain and lumber trade. She was square-rigged on the foremast, and could carry 300 or perhaps 350 tons of coal. A few years before her demise she had sailed out of Toronto on Christmas Day, loaded almost decks-to with lumber, her cargo piled high above her rail, and secured with chains. These passed not only over the deckload, from coveringboard to coveringboard, but went clear around the vessel, under her keel and up on the other side. They were hove taut with purchases or turnbuckles. That was the way they frapped or undergirded the Alexandrian corn-ship Saint Paul was in when he was wrecked on Malta, and that is the way they held more than one old hooker together in schooner days on Lake Ontario. The chains or cables not only held the deckload in place, but they squeezed the ancient ribs and planking together and kept the Fleur de Marie—as the Castor and Pollux eighteen hundred years before—from spewing her oakum from her seams and drinking the lake dry. The Fleur de Marie must have been pretty old by this time, and sailors knew they were taking a chance when they shipped in her. Before they cast off her lines for this Christmas trip they demanded, and got, $40 for the run to Oswego—maybe fifteen hours, maybe fifteen days, maybe never—and their fare paid home if the vessel was laid up for the winter in the foreign port.

END OF THE WEST WIND

The schooner West Wind was mentioned as perhaps being named in propitiation of the demon or divinity that always made things tough for schooners trying to take Oswego. Capt. Williams said that in the fall of 1878 or thereabouts, when he was in the Clara Youell, they came out of Oswego to load lumber at Cobourg. The West Wind, similarly bound, had left Oswego some hours ahead of them. Next morning, drawing in with the north shore, on a point about a mile and a half east of Cobourg they saw the West Wind with her stern to the land and her bow to the lake and standing still. She was hard and fast aground.

That was the end of the West Wind. She had been an American bottom, owned by Thompson Smith, M.P., or the firm of Smith and Post, lumber merchants in Toronto. Capt. James McSherry, who was a good ship carpenter, had bought her, and done considerable work on her, and she was sailed by the McSherry family. How they got ner ashore in the moderate weather prevailing is not known, but they could not get her off, so they stripped her for the winter. When they came down next spring for another try at refloating her they found that Northumberland County farmers had come out on the ice which had formed around her and protected her from the seas, but they had cut her down to the water's edge. There was lots of good plank in her, and it had all gone for firewood or pigpens or barn floors.

Poor Capt. McSherry, almost a ruined man, then bought the Belle Sheridan, which was lying sunk at the foot of Church street in Toronto, and repaired her. He was lost in her, with his family, all except young Jim, at Wellers Bay the following year, in the great gale which shattered or scattered sixteen vessels which were in sight of one another on Lake Ontario at twilight on the evening of Nov. 6th, 1880.

Capt. Williams had not seen what happened to the West Wind, for the Youell came into Cobourg, loaded her lumber, and got out again and down to Oswego with it. Here she loaded coal for Toronto and got a charter to load grain in Toledo on Lake Erie, for a last trip for Kingston, if the Welland Canal did not freeze up meantime. She got to Toledo all right and loaded, but could not get out of the Maumee River, and had to lie there all winter, with Capt. Williams as ship keeper.

Going back to the Fleur de Marie with which we began, as she got older and creakier it became harder and harder to find sailors for her.

The late Magistrate J. J. O'Connor, of Thunder Bay district, was a sailor in his youth, and he led and won the first strike the Fleur de Marie had to face as advancing years crept on her. This was when he and she were in their twenties, which is a lad's best time in life, but not young for a sailing vessel. Wooden vessels start to get "old" at ten, and while they can be kept alive for centuries by sufficient repair and rebuilding, their "expectation of life" is optimistic if put at thirty years. There will be more about the Fleur de Marie next week.

Had a call the other day from LWtr (that means leading writer in the new navy) J. M. Redditt, RCNVR, with his crows nest under his arm.

'S fact. They do strange things with gear in this war. The Crow's Nest in this instances is a newspaper, founded by H.M.C.S. Cornwallis at Halifax, (it seems it is not betraying naval secrets to mention Halifax this time) and spreading through the service and ashore at the rate of 11,000 per spread to date and going up. It isn't printed at Halifax, either, so another naval secret remains intact.

Leading writer is a little different in the navy than it is in Fleet Street. LWtr. Redditt does more than write the leading editorial, he's the managing editor of Crow's Nest. It's a bright paper, with a new "tiddley" masthead, bearing the inscription News of Canada's Navy, which removes the impression that it is still only a Cornwallis ship organ. It honors its Cornwallis foundation but has taken on range and scope a good deal wider than all of that warship's chain cables shackled end to end. If it puts up stiff competition with The Telegram's Active Service, Schooner Days and Roy on the Waterfront, well, we hope we can take it and still be allowed to help win the war.

Arthur Snelgrove, 180 Hillcroft street, Oshawa, would like more particulars of the loss of the schooner Emerald, which foundered Nov. 17th, 1903. His mother's half-brother, Capt. Frank McMaster, and his son, Walter, were lost, with the whole crew of seven. Several numbers of Schooner Days have dealt with the Emerald. While they are not at the moment available, her story will be repeated when Schooner Days appears in book form, perhaps next year.

From Wm. H. Wray, of Milford Bay, amid the snowdrifts of Muskoka, comes confirmation of the guess hazarded in explanation of the "balsam" at the mastheads of "Mortar Schooner No. 7" as a recent picture was entitled. The print was from a book "War of the Rebellion— Records of the Union and Confederate Navies. Series I., Vol. XVIII." The schooner belonged to the West Gulf blockade squadron, and was used on Fort Jackson about March, 1862—all of which corresponds to the guess from the drawing.

FLEUR-DE-MARIE of WHITBY, after J. F. McGinnis' drawing of a lake brigantine and the late Magistrate O'Connor's description of this vessel. 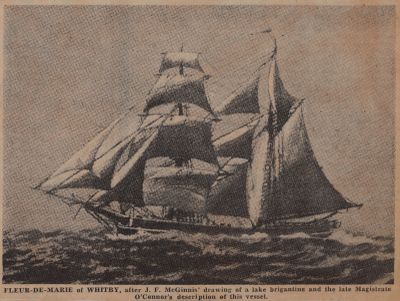