BOB STANDLY, of The Pines, less familiarly known as R. W. Standly, Esq., Cobourg, Canada West, who died in 1905, was one of the men who gave Cobourg the reputation which it still enjoys of wealth, fashion and sportsmanship.

In the second half of the nineteenth century horses, yachts and fine homes became the characteristic of the county town of Northumberland, which had begun life as Hardscrabble, graduated to Hamilton, and escaped into the second sector of Saxe-Cobourg-and-Gotha.

People of substance came to Cobourg from England across the ocean and from New York State across Lake Ontario, bringing with them a taste for big houses and the life of the country gentleman, and the means of gratifying it. One of the former was Robert William Standly. Born January 19, 1832, at Diddington, Hunts, England, he started to study for the ministry, but came into an estate when about 18 years of age and developed other ideas. The estate was that of Poynton Standly, and named "Paxton Park," with a great house.

Selling his holdings not long after the inheritance, R. W. Standly came to Canada. He sent out his personal effects and some heirlooms and jewelery, booking passage on the same sailing ship which carried them. For some reason he missed this vessel and sailed later, only to find upon his arrival that the first ship had been lost.

Still a rich man, with a fortune of about £80,000, he began his life in Canada, living for some time in Western Ontario in the vicinity of Chatham and Goderich. A brother, Henry Standly—-possibly of the firm Standly and Campbell in Cobourg, 1848—-had come to Canada some years previously. He had bought a property near Grafton, east of Cobourg, from Sir Richard Poor. This was "The Pines," and was later purchased by Robert Standly from his brother. It is a fine 20-room brick house, still standing, snowbound, on 150 acres.

It was here that Robert Standly married Marion Pringle, who died leaving him no children. He then married her sister, Lila Helen Pringle (about 82 years ago). There were children from this marriage, including John, who is now dead; Fred, who died at "The Pines"; Caroline, who lives in Toronto; Mrs. Florence Boggs, of Cobourg, who died some years ago; Poynton, of Chicago; Mrs. Lillian Reymes, of Grafton and Cobourg (from whom this information was received), and Robert William, Jr., who died in Calgary about 15 years ago.

Standly joined joyously in the life of Grafton and Cobourg, which began expanding in the 1860s, with the incoming of other English and American families. If he didn't introduce cricket there he certainly fostered it and was an outstanding member of the Grafton eleven, when cricket was still being played in whiskers and top hats. And of course he loved horses. He bred some fine mounts at The Pines. His son Poynton wears the moustache and the uniform of the Strathcona Horse in his South African War picture of forty-four years ago. He may have ridden a Pines-bred mount agains the Boers, but it was in Portage La Prairie that he enlisted.

Yachting Northerners and hunting Southerners alike found Cobourg congenial when the American Civil War was going with the wind. There was an influx from Rochester as steady then as the car-ferry coal that comes into Cobourg still from the same port. Bob Standly turned his attention wholeheartedly to yacht racing on Lake Ontario. It was he who brought to Cobourg the sensational yacht Gorilla, whose model ought to decorate the Cobourg Town Hall. The Giffords of Cobourg are also, and properly, associated with this remarkable craft, because Major Charles Gifford, America's Cup challenger, later bought her. But Bob Standly sailed her.

MR. D. GARFINKEL, in the New Wellington Building, Toronto, is not an art dealer but a rental agent with an appreciation of good pictures.

Recently he came across an unidentified wash drawing which appealed to him for the peculiar depth and luminosity of the arrangement of sea and sky.

There was no signature, nor could one be found by taking the drawing out of its frame and mat and examining it with a magnifying glass. The style of drawing of the yacht and the brushed-in notation, "Gorilla, off Cobourg, Aug. 3rd, 1870," suggested the late Wm. Armstrong, C.E., earliest secretary of the Royal Canadian Yacht Club, drawing master in the old Grammar School which became Jarvis Street Collegiate, and water-color painter of many of the yachts of the nineteenth century, and of many scenes of outdoor life in Canada. The treatment of figures, sea and sky seemed the work of a great master in grisaille, grey-tone, or wash drawing. As all of the Armstrong work remembered had been in color it was not possible to determine whether the picture was his, in whole or in part, or that of a greater master in monochrome.

In showing his acquisition to friends Mr. Garfinkel unknowingly has given the world an idea of what one of the greatest of the forgotten yachts of the nineteenth century was like. Gorilla has lived only as a memory of speed and sportsmanship, her appearance lost in the sixty or seventy years that have closed over her wake. It was not known that a picture of her was in existence until Mr. Garfinkel found this one. The late Aemilius Jarvis, who saw Gorilla before he himself won his first race (and that was in his 18th year), gave the writer a description of her.

SIR WILLIAM MULOCK is probably the only yachtsman now alive who has seen the great Gorilla.

He was a youngster in Commodore T. J. Robertson's racing crew of the cutter Dart in 1865, when the Gorilla held the unprecedented record of winning the Prince of Wales Cup three times in succession. She had also swept the lake in the Cobourg regattas of 1862 and 1863 and the Kingston regatta of September in the latter year.

Gorilla was George Steers' baby, ugly as sin and swift as Satan. Steers was the man who designed fast pilot boats ninety years ago—and also the world-famous America. The latter is enshrined in the United States Naval Academy at Annapolis. Md., after rocking two continents periodically with the cup she won in the presence of Queen Victoria in 1851. Gorilla may have been Steers' first venture into shoal draught vessels.

This sprawling, broad-buttocked snub-nosed centreboarder, shaped like a blunt flatiron, bore Steers' name when she was built. That had been rubbed out by the time she got to Lake Ontario. Gorilla was substituted, not in compliment to Mr. Steers' pulchritude, but to hers.

It may have been the invention of Mr. R. W. Standly of Cobourg, her Canadian owner. Her private flag was a white square quartered by a thin blue cross, with a great brown monkey in the topmost inner corner, like an ape in a cage.

Gorilla herself was painted green. Her sloop rig, shoebox cabin and the square windows further outraged yachting proprieties, which still concerned themselves with flush decks, skylights, portholes and the cutter or schooner rig.

Gorilla had three sails—-a high narrow mainsail, with a topsail above it, spread by a jackyard as long as the main gaff. Her mast was in the eyes of her, instead of amidships, like a cutter's. Ahead of her for twenty-five feet, or half of the length of her hull, she thrust out an audacious bowsprit, on which she set one loose-footed jib, like a modern jenny. This sail was cross-cut, the seams of its cloths running almost perpendicular to the luff. It was thirty years ahead of the cross-cut era on the lakes.

Perhaps Standly got Gorilla in Rochester where his fellow-townsman, Mr. C. E. Elliott, had just had the little Wide Awake built. Cobourg was then the home of many yachts, the Arrow, Expert, Glance, Donna del Lago, Wide Awake and Kitten. It was also the hailing port of Alex. Cuthbert, a schooner man who built and sailed yachts, including the Countess of Dufferin and the Atalanta for the America's Cup. More than one professional boasted that "with this here Gorilla" he'd make a monkey of Cuthbert. No man ever I succeeded in doing that, but Capt. Donovan, an amateur, had a good try. About which Schooner Days will tell next week.

GORILLA'S portrait in monochrome which revives interest in the baby sister of the famous AMERICA.

POYNTON STANDLY, son of Gorilla's owner, may have ridden one of his father's horses in the South African War.

"THE PINES," east of Cobourg, through whose white gates Bob Standly drove in his carriage to sail GORILLA out of Cobourg harbor eighty years ago. 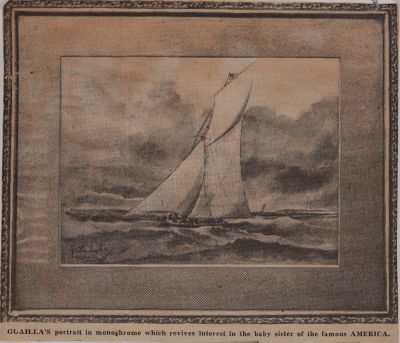