PRINCE OF WALES CUP is the oldest trophy of fresh water, commemorating the Royal visit to America in 1860. Wide Awake won it against the Royal Canadian Yacht Club fleet in 1861. Next year, after sweeping regattas at Kingston and Cobourg the big Gorilla, of seven times her tonnage, came up to Toronto with the little Wide Awake from Cobourg and went through the same fleet like a fire. The race was then over a seventy-mile course, across to Port Dalhousie and back into Toronto Bay, finishing opposite the old Union Station. With the wind on her starboard beam the "great ape" waded across the lake in 4 hours flat and clawed back in 4 hours 46 minutes and 25 seconds, spitting suds all the way.

The pride of the R.C.Y.C., the iron cutter Rivet, toiled after her in vain all day. Rivet had won the first regatta while the Prince of Wales looked on through the rain. She was three or four miles astern when Gorilla finished, and the new yacht Breeze, Commodore Hodder's flagship, five or six miles farther back.

Gorilla averaged eight knots, wonderful time for a yacht about 40 feet on the waterline and 50 feet on deck. Wee Wide Awake was put to sleep early, and the Kitten, which had also come up from Cobourg for the regatta, never got her eyes open. All the small yachts turned back before they got far. Those that stayed the course were drenched from stem to stern. It was hard going, especially on the home stretch.

The Toronto Leader's sporting page, holding the post mortem next day, said sedately: "Dr. Hodder's yacht the Breeze is quite a new vessel. She was very carefully built with the latest improvements, faithfully carried out in model and rig. In time, as her points are better understood, she may exhibit an improvement. The Gorilla is a centerboard yacht of 27 tons burthen, and although the estimation of many not an elegant symmetrical craft" (how nicely they put things then!) "she has proved herself a quick sailor on a long stretch." She did that next year and the next, taking the Blue Ribbon of Fresh Water three times in succession.

GORILLA, as explained before, was as ugly as a flat iron. She was heard from again in 1870 when sailed by Capt. Donovan of Cobourg. Major Charles Gifford had bought her from R. W. Stanley, her first Canadian owner. Major Gifford became Vice-Commodore of the Royal Canadian Yacht Club and challenged for the America's Cup. Designed and built by George Steers, who built the original America. Gorilla was named the George Steers at first.

HARD FIGHTS WHEN THEY PLAYED FOR KEEPS

On August 17th, 1870, Gorilla had a terrific tussle with the small cutter-rigged yacht Ida, then fresh from Montreal, and sailed by Capt. Cuthbert and a crew of Cobourg yachtsmen. The Gorillia, creaking with advancing years, was sailed by Capt. Donovan and a crew of professionals from all over the lake. It blew so hard that deep-draught spectator yachts hugged the harbor all day, but the big gladiator and the little one went out—the start was at the outrageous hour of 7.20 a.m.—and the little one came in a winner by 27 minutes when the time-allowance for tonnage computed. Alex. Cuthbert crowed that only a Cobourg crew could beat the hitherto invincible Cobourg boat.

The little Montrealer was fast, but she had profited by misfortune. She carried away her topmast, and with absence of this tophamper—quite unnecessary in the heavy wind—she stood up and pointed and footed better. She sprung her mainboom, too, but the spar held together long enough to get her across the finishing line. Gorilla might have housed her topmast with advantage, but perhaps the gang of pro strangers did not know how to unfid it. It was short, and her lower mast long, keeping much weight aloft in any event.

Yacht racing was then second only to horseracing and cockfighting as a betting sport. The Toronto Rowing Club were heavy backers of Gorilla in this Cobourg match, and in spite of the trimming she then took, they promised to pit her against the Ida or any other yacht on fresh water, for a considerable sum at the next opportunity.

This came on Sept. 7th at Toronto, when the Prince of Wales Cup was again raced for, to Niagara. This was before the days of flying starts. The racers lay at moorings off the old Union Station, with mainsails hoisted and headsails down. On the crack of the gun they hoisted jibs and cast off working out of the bay to the lake. The wind was fresh from the eastward, with the sea making.

Gorilla had not only Ida to fight, but Commodore Hodder's new flagship, the schooner Geraldine, which had taken the cup the previous year. She was as big as Gorilla or bigger, measuring 28 tons. In trying to edge past Geraldine in the channel, Gorilla struck on the bar and swung around, the two yachts bumping bow to bow. The schooner shot on, leaving Gorilla pounding on the sand. They played for keeps in yachting in those days. The Ida set her topsail and the whole fleet left Gorilla to her fate.

Not for long. Capt. Donovan sent his tall gafftopsail aloft and the added pressure lifted the Gorilla off the bar and "she went ahead like a steamboat," as the godly Globe of the day said.

Ida was leading the fleet, flying for her life from wave top to wave top, with her hull almost under water. Her cutter build enabled her to hold up to windward, but she was over pressed. Before Providence again came to her aid by snapping her topmast, she rounded to, took in the topsail, hauled out the first reef in the mainsail, and shifted to her second jib. Gorilla, having rapidly overhauled the fleet, was abreast of Ida, but to leeward. She had almost passed her, when the bigger boat's wooden centreboard cracked in two, and half of it floated up in her wake. It was probably sprung when she pounded on the bar.

This accident would have thrown any other contestant out of the race permanently. B. R. Clarkson's cutter Glance was flying distress signals by now, with the water over the cabin floor, and had squared away for Port Dalhousie. J. H. G. Hagarty's schooner Kestrel, sailed by the late Chief Constable H. J. Grasett gave up, too, and followed to render assistance. The little 6-ton cutter Stella was still in the race, but far astern of the leaders. Capt. Donovan unscrewed one leaf of the cabin table, which was hinged to the centreboard box, and drove it down through the slot in the top. Enough of the table projected below the bottom of the Gorilla to keep her from going to leeward too badly. The race was still on.

Seven miles from Niagara the sea was so high that Gorilla's mainboom was dragging in the water. Sometimes the mainsail would be plunged in up to the first reef. Even after taking in her gafftopsail she was still so much on her ear that the boom had to be raised by the topping lift to keep the clew of the mainsail out of the seas. Two miles back on Gorilla's weather quarter Ida toiled along, alternately flung almost clear of the wavetops and buried to the carlins of her cabin in their troughs. A gallant fight by a little cutter against a larger sloop! She could point higher than Gorilla, but she could not foot. Being to windward of the stakeboat moored on the Niagara Bar, as well as of Gorilla, Capt. Eadie eased Ida's sheets and kept her off three points, steering directly to cross Gorilla's pitching bows. The Ida went like a scalded cat, but Capt. Eadie had misjudged the scend or heave of the seas and the speed of Gorilla. It was Gorilla's broad stern, not her bowsprit, that Ida crossed. And then she could not fetch the stakeboat, and had to tack twice. Gorilla was half a mile ahead of her. She turned the mark at 3.25.50, after five hours and three quarters of hard sailing, including the time she had spent pounding on the bar. Ida turned at 3.31.30, Geraldine at 4.15, completely out of the picture. Stella was so late she was not timed, if she got there at all, and Kestrel and Glance never finished.

The leaders ran into the Niagara River, the Gorillas joyful, the Idas glum. But the glooms changed to grins When Capt. Royatt, the timekeeper, declared that Ida was the winner of the cup by 1 minute and 50 seconds "corrected time," for Gorilla had to allow her 9 1/2 minutes for the difference in tonnage. The Gorillas set up a howl of anguish which might be echoed across the lake by the Toronto Rowing Club. They declared the time allowance was wrong,' because it was based on 28 tons measurement instead of 27, and that the timing was wrong, because they were "a good ten minutes ahead" at the stakeboat. But Capt. Royatt was judge as well as jury, and what he said went-—and with it the Prince of Wales Cup to Ida. Gorilla was awarded a $50 cup as second prize.

Few of the old yachts were well built; and only the iron Rivet had a long life. Gorilla was creaking by 1870, when she was entering her second decade, and the pounding on the bar had damaged more than her split centreboard. She was rebuilt during the next year. Whether extract of monkey glands was caulked into her new seams or not, she was so far rejuvenated that she went to Toledo on Lake Erie to have it out with the Ida there. Returning up to Lake Ontario over this same Niagara course in 1872 she won the Prince of Wales Cup for the fourth time against the fleet, including the new Oriole, first of that great line.

UGLY AS SIN AND SWIFT AS SATAN

GORILLA OF COBOURG, queen of every regatta for three years in succession in the 1860's, four times winner of the Prince of Wales Cup, was a younger sister of the world-famous America, over whose "Cup" millions have been spent in international contests. This recently discovered picture of Gorilla, probably by the late Wm. Armstrong, C.E., show's her off Cobourg Aug. 3rd, 1870, two weeks before the great race in which, as Alex Cuthbert said, Cobourg men beat the Cobourg boat for the first time. 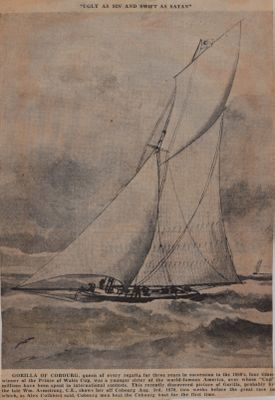