THE best ship of the hundred and ninety-one built by Smith and Rhuland at Lunenburg, N.S., was the salt banker Bluenose, queen of the North Atlantic and parts south and east. Dick Smith and George Rhuland have just retired, after forty-two years in double harness, but the firm, which is a very old one, goes on under the old name and the new management of John Rhuland, master builder, son of the retiring George.

Change of personnel in the ancient building firm which turned Bluenose from Nova Scotian birch and spruce into the best fisherman that ever floated, and last week's destruction of "a large British West Indian schooner" in the Caribbean, call the old champion to mind. Bluenose was last heard from down south.

The Caribbean and the Mediterranean were the last seas to preserve commercial sailing vessels in large quantities. Up to wartime, sailing vessels, large and small, were a means of inexpensive passenger and freight traffic in both bodies of water.

We had a picture of a Greek caique—schooner rigged and motor powered—sweeping mines the other day. Full-rigged brigs with blue-painted mastheads and sheers like a melon rind were still to be seen on the waterfronts of Messina and Naples, among the feluccas, golettas, square-rigged ketches—yessir—and lateeners. From St. Kitts in the Caribbean down the lesser Antilles, all the way to Venezuela one would encounter little sailing packets of all vintages and histories—an ex-yacht of the old Kaiser's, a Boston pilot schooner, a Lunenburg fisherman, hundreds of local craft — Dutch, French, Danish, British — all carrying passengers and freight between the islands and South America. Bridgetown Careenage would hold thirty or forty of them daily, careening for bottom cleaning, or loading or unloading on the broad stone quays. Bridgetown Roads in Barbados were full of deep sea square riggers, Yankee whalers, Newfoundland and Canadian tern schooners in the last war. Some of these never left the place, although they were too big for profitable freighting among the islands.

It is into a trade like this, revived or intensified by the war, that Bluenose went last year — flying the British flag but American owned, her lofty racing spars cut down to knockabout rig, her broad canvas wings replaced by Diesel engines. Sad fate for an ex-champion. It is not likely that she was the "large British West Indian schooner" recently torpedoed, for the owner of the latter was her captain, Wilbert Compton, last seen, shell shattered, on a raft with other men trying to save their lives. Compton came of a schooner-owning family, but we have no record of the Bluenose being in their fleet.

For years the West Indian and Mediterranean markets for dried fish have been shot, and saltbanking has dwindled and fresh fishing by power schooner or beam trawler has been taking its place. When saltbanking was good the bankers used to go to the County Fair and the Fishermen's Picnic, and then clean and overhaul their vessels to freight the fish, after it had been "made," to Gibraltar, Oporto, Naples, or Porto Rico, Barbadoes, or British Guiana. If they went to the West Indies they would stretch across to Turks Island and load salt there and come home with a salt cargo for the curing of next season's catch. Sometimes they would load salt in Spain or Portugal for the same purpose, but the Turks Island salt ponds gave better results. Sometimes the fishermen brought home molasses instead of salt, and sometimes they carried out lumber instead of dried fish.

In Bluenose's first year she fished all season, won the provincial and international championships in schooner racing, made two trips to Porto Rico with dried fish and came back from Turks Island with salt — and paid a dividend of fifteen per cent to her shareholders.

Bluenose was built when saltbanking was at its very best, the price of fish high after the war, the markets open, and freight rates good. She was a radical departure, for she was the first fisherman designed by a naval architect.

It was the genius of W. J. Roue, recently a student in the Halifax Tech, who had designed a yacht or two, that created her. Smith and Rhuland built her, but the myth that they "corrected" Roue's plans is all moonshine. He had to fight like the tiger he is to keep them from butchering his streamlined refinements — but he won. They did succeed in giving her a foot more sheer forward than his plans called for. This gave her that rather Roman nose. It did not make her any faster, in fact it slowed her down; but "Bill" Roue, who stepped at one stride over many obstacles into the front rank of naval architects of this continent, accepted this above-water discrepancy philosophically. "After all," he conceded, "there is a lot of difference between having a foot of water on your deck and none at all. If twelve inches more sheer will keep Bluenose that much dryer lying to an anchor in a rough sea, it's all right with me. She sails on her bottom, not her deck."

She was built at the peak of shipbuilding prices, when the tonnage lost in the Great War was being replaced, and she cost the unheard of figure of $35,000. That was almost double prevailing prices for a fisherman, but less than half the money Americans were spending on another aspirant for the championship of the Atlantic. The Mayflower cost $75,000, and never raced the Bluenose; the Columbia and the Gertrude Thebaud, both of which did, each cost over $65,000, and the Henry Ford, which she also beat, about that much.

Lunenburg County fishermen, Halifax business men, Sir Joseph Flavelle and Aemilius Jarvis in Toronto and G. Herrick Duggan in Montreal, were the backers of Bluenose, taking shares in the enterprise. All the money she ever made — and she paid a 15 per cent, dividend the very first year — stayed in Nova Scotia. Angus Walters, her colorful skipper, had the largest single investment in her from the start, $5,000, and eventually became her sole owner. She won on her own keel, but Angus was the man who put her over the finishing line, first every time that counted. He is a grand skipper.

Bluenose won the silver trophy of the championship of Nova Scotia and a cash prize of $1,000, and the silver trophy of the championship of the North Atlantic and $5,000 prize money, the first year she raced. She won both championships again the second year, and again the third year, and still retains them, although they have not been raced for since. The third international contest broke up in a row. After that Bluenose won and lost several exhibition races. Bluenose always won these races when it was necessary for her reputation to do so. She sometimes had difficulty in losing — for this was also necessary on occasions.

It is curious that she always defeated with ease the Haligonian, which W. J. Roue designed as an improvement on her. The fact that Haligonian was twisted by grounding on The Boot at Canso before she ever raced may explain this. On paper she was a better design.

She might have won every race she sailed and still not have been the best ship Smith and Rhuland ever built. But she was that as well. Apart from her speed, she was a dryer, abler vessel than any of her competitors, and never lost a man or a spar or a voyage. One of her crew fell off a strange wharf in Gloucester and was found dead when the tide went out, but he was not near the Bluenose when he slipped, and she had nothing to do with the fatality, though she came home to Lunenburg with her flag at half mast in deepest mourning. The year of storms which destroyed her closest rival, the Columbia, and drowned three Nova Scotia schooners with such loss of life that the Provincial Workmen's Compensation Fund went out of business, the Bluenose rode through the hurricane hove down so far for twelve hours that the alarm clock in Angus Walter's cabin swung up against the carlins of the ceiling and wore a groove there in which it stuck, though it kept on running.

Bluenose is one of the very few sailing vessels that have been caught in the bight between the horns of Sable Island, that real graveyard of the Atlantic, and come out alive. All night in an April snowstorm Angus Walters flogged her out of the bight under the three-cornered riding sail, reefed foresail, and reefed jumbo. She was at anchor, sixteen miles out, when the hurricane parted her cable and big seas burst in seventeen 6 by 8 stanchions and the bulwarks on the starboard bow. He got his crew up on the gaff of the furled mainsail out of harm's way and kept the wheel himself, lashed to it. She was forced in so far that Sable Island sand choked the spinner of her taffrail log and was thick on her deck as on a beach. Three hundred ships that got that close to Sable Island left their bones there. But Bluenose didn't. She beat clear, and next morning worked back to the exact spot where she had left her trawls and picked them up, full of fish.

Equally compounded of salt and pepper, Angus Walters commanded Bluenose for twenty years and sailed her into victory.

As and when he designed Bluenose twenty-two years ago - a Telegram snapshot of him aboard her and after her first race, 1921.

BLUENOSE IN HER RACING REGALIA 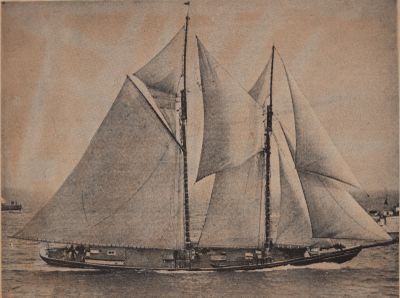