FITTING-OUT TIME is with us again, though you'd never guess it from the week's beginning. But they're planning Mariners' Services, which is a sure sign that by next month the boys, old and young, who haven't gone in the army, navy, air force or convoys will be oozing back from winter work in Lakeport or Picton or St. Catharines or Toronto or the bush to the big steel monsters whose black or red hulls have rusted all winter on the waterfront, and whose funnels are already beginning to send up a heavier plume of smoke than the meagre thread that came from the shipkeeper's bit of soft coal in the galley all winter.

Much has changed in fifty years. Then the waterfront ice would be drifted at this time with the chips and shavings of a whole winter's carpentry on the sides of the tall sparred schooners which had been undergoing repair. The wharves would be beginning to blaze with brilliant emerald, or red oxide, or white or black or bluish lead-color, going on with contrasting stripes of red, white, yellow, green and orange, over the blistered, faded old paint, or the bare surfaces of new work. Billowing canvas, brand new, blue white or yellow duck, or old, mottled with patches and coal dust and iron ore stains, would be flogging in the March zephyrs at the foot of every street from the Queen's Wharf to the Don.

Now bunker coal, fifty-fifty smoke and heat, or oil fuel if you can get it, is the freighter's motive power and the wooden walls are no more. But crews are got just the same; they're sent for, where they've been hibernating, and they trickle in like maple sap to the bucket, until forecastle and afterhouse are full up—-maybe.

Prince Edward County has supplied sailors for all over the lakes for a century, and for all over the world for these last three years of war. A good Prince Edward friend of Schooner Days, Mrs. Edward Rorke, now widowed and still keeping up her old home on the road to Cherry Valley, told recently of a spring fitting out and first schooner trip from Oswego in her young days. The county then as now supplied many sailors for American vessels. They were so good that American captains sent for them year after year.

The two schooners concerned were as fine a pair of three-masters as you would want to see. One, the C. G. Houghton, went down in Lake Erie off Bar Point in 1907. Last seen on Lake Ontario unloading coal for the penitentiary at Portsmouth, a fine sheery craft with a bold bow, straight stem, rounded quarters, and a topgallant rail running all the way around her, from knightheads to taffrail. Lightning had hit the ball above the truck of her mizzen topmast, and the head of the spar stuck out above the eyes of the rigging like a horse's ear when he's bound for the manger. For some reason the half fathom or so of timber stayed up there, too high to be got down. The Houghton was white, with black beading and rail and coveringboard; a neat paint job.

So, too, was the W. H. Rounds, the other schooner in the story. Mrs. Rorke sailed in the L. S. Hammond in the Rounds' company, and knew her well. The Rounds passed out two years before the Houghton, going down in a gale off Black River in Lake Huron in 1905. Mrs. Rorke will describe her in her own words, and these have been held back too long already. Here is substantially what she said:

CROSSING ST. LAWRENCE ON THE ICE

The W. H. Rounds was the finest looking schooner I ever saw, carried three masts and a single raffee on the foremast, white top, grey bottom, sat on the water like a bird and could sail some. She was saucy looking.

In the year 1894, the schooner W. H. Rounds was laid up in Oswego along the first of November. Her captain was George Williams and had been for several years. He was no relation to Schooner Days' friend, Capt. John Williams of Toronto. Edward Rorke had been mate with him two years and his mother cook. The W. H. Rounds was owned by Sullivan in Toledo and that was where she hailed from. The schooner Houghton also was laid up in Oswego; I believe the captain's name was Le Mond, a Frenchman; at least that was who sailed her down the river at Ogdensburg.

In the spring of 1895 Capt. Williams wrote for Ed. Rorke and his mother to come to Oswego. They lived at South Bay at that time. They drove to Picton, took the stage to Deseronto, then the train to Kingston, but the crossing between Kingston to Wolfe Island and to Cape Vincent was bad. They had to use a rowboat; sometimes they shoved it across the ice then again rowed in clear water.

It took them a good many hours and they were nearly frozen. Ed. Rorke did freeze both his ears— but at last they reached the Cape and took the train there for Oswego. They went to Capt. Williams' home and stayed all night, then went aboard the next morning.

SON ON THE SHAMROCK

Capt. Williams was a short, stout man, a typical Irishman, born in Dublin, and so was his wife. And the Irish brogue he would use! "Be me sowl!" "Be the powers of ould Ireland!" "Be jabers!" "Be this and be that!" and many more, when he was excited. He was as good a captain as ever sailed a schooner. In fact Sullivan the owner had great faith in him.

Capt. Williams had her crew all there. The only one I knew outside the captain, cook and mate was Andy McKee from Toledo. The Rounds was going up light to Toledo and chartered to load grain from there — so was the Houghton — the first one to get up got a new hat.

Capt. Williams flew around and hustled everybody, saying "Be jabers Ed., we'll show them the tail." They also rushed aboard the Houston. Both vessels got ready to be towed out. The tug Rescue was alongside, and had not Capt. Williams forgotten his clearance papers! And did he not fall all over himself in his rush to the harbormaster's office!

He was gone no time, but the Houghton got the tug first and started towing. Capt. Williams jumped up and down, shouting: "Be the powers of ould Ireland if I don't run him undher!"

The tug came back quickly and took the Rounds out of the river, but the Houghton had made sail and started on her way up Lake Ontario.

They soon pulled the Rounds' canvas on and she was off like a bird; a light breeze was blowing and it started to snow and we could see nothing. When the snow lifted we were abreast of the Houghton. In the snow they could not see and were afraid to carry on much canvas. When they saw the Rounds they set everything. Then the wind died right out. The Houghton was farther offshore and her topsails caught a little breeze aloft, so she pulled ahead.

Capt. Williams roared: "Crack on the raffee!" They did so, but it got jammed sheeting home and they had to take it in and fix it. While this was being done Capt. Williams' hair almost turned grey. Shortly they got more wind, but the Houghton had got the start of them and held it all the way up Lake Ontario and reached the Welland Canal first, just ahead of the Rounds. They locked through to Port Colborne the same as usual, the Houghton always ahead, of course. But when the Rounds got her canvas on she cut the water as sailors say. The wind was aft and strong and getting stronger. The Houghton began to shorten sail. The Rounds showed her heels, but, would you believe it, the main boom sheet ripped from its blocks and the mainsail shot out over the side and almost dragged the vessel under when she rolled, the 40-foot boom in the water. Ed. Rorke, the mate, caught the thrashing rope and, winding it around his arm, shinned out on that boom, Capt. Williams shouting: "For God's sake, Ed., come back!"

But out he went, foot by foot, fastened his left arm around the topping lift and with his right arm rove the sheet through the block and shouted: "Pull!"

If ever boys pulled they did, slowly, carefully, with the schooner's boom dipping in the waves and her canvas flopping.

They pulled him in and made fast. Capt. Williams caught him in a huge embrace and said: "Be the powers of ould Ireland, I've a dam' good notion to club you!"

The mate was none the worse for his venture, but the Houghton was by this time away ahead.

The Captain said: "Ed., she has us beat!" But the mate cried: "Crack on your raffee again and let her run!" And run she did and was not long coming up on the Houghton once more.

Captain Williams showed his colors when they passed her, hoisting his burgee and jack and stars and stripes, and told the cook: "I'll be wearing the shamrock at the main truck from now on!"

They signaled the harbor tug, Skink, and were towed in and had everything in shape for loading when the Houghton towed in. Capt. Williams got the harbormaster's hat, and when they put it on his head, he lifted it solemnly and said: "To the anner of ould Ireland!"

RECALLING "BENS OF JURA" IN SONGS OF THE HEBRIDES

Smart little fore-and-after from the Port of Cramaha, the JURA, built in 1862. 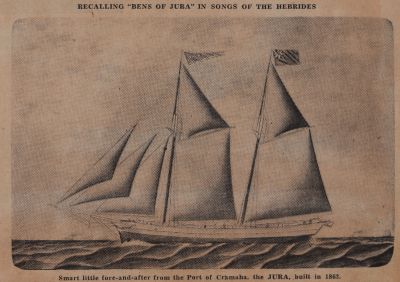