Newfoundland Uses As Many Schooners as Great Lakes Ever Had -

A NAVAL OFFICER, just back from bringing a flock of Fairmiles through a March gale so cold it froze the ocean under them as well as on them, gave the Shellbacks the interesting news this week that there are fifteen hundred schooners still working out of Newfoundland. Freighting and fishing are their jobs, and, though many of them have auxiliary power, they work under sail all they can, both from preference and to cut down costs. They are well kept up and they are making money as they deserve. In that ironbound island, where there are few railways and highways, the schooners are a principal means of communication and transport, for steamers are busy at something else. The vessels run in size from big ones like the Bluenose, 143 feet over all, to little 40-footers.

Fifteen hundred schooners is as many as we ever had on the five Great Lakes in the hey-day of schoonerdom. More sailing vessels than that were built in the century iand a half of sail, but there were never more than fifteen hundred in service even in the greatest years, which were the 1870's.

ANOTHER ticket from our friend the chief of police in Oswego, N.Y. He says (being very hard-boiled like all police chiefs) "The old skippers from Cat Hollow would be surprised to see this—about four hours in the lake, four hours loading and four hours to unload, sixteen hours for the whole round trip."

The chief is right. The old skippers from Cat Hollow—they held their Sailors' Farewell Service last Sunday evening in Colborne this year with Capt. Chas. E. Redfearn on the bridge—would indeed be surprised at sixteen hour round trips from Oswego. The schoonerman who made three a week deserved—even if he didn't get—the harbor commissioner's hat for that. Capt. James H. Peacock, Cat Hollow captain, did it once with the Mary Everett, carrying lumber out of Port Hope. He was denied the standing award of the hat because he was then a "stranger"—from twenty miles away!

But the old skippers' eyes would pop even more at the idea of carrying coal to Oswego, for up to a few years ago that was as improbable as carrying coals to Newcastle. In schooner times Oswego was the great export coal port of Lake Ontario, the little fore-and-afters lining up at the D.L. and W. trestle to load coal for Kingston, Bay of Quinte, Cobourg, Port Hope, Whitby, Toronto, Oakville or Hamilton, after they had unloaded their grain or lumber from the north shore. Many of them came in empty and never carried anything but coal from Oswego, as Ontario shifted from cordwood to anthracite and bituminous. If they made one round trip every week in the eight-month season they were doing well.

When the barley trade blew up and the brewery elevators disappeared Oswego became Lake Ontario's principal coal port. Then Little Sodus or Fair Haven was developed by the railways. Its coal trestles were burned out twenty years ago, and Great Sodus, within thirty miles of Oswego, flourished all the more, being a shorter haul from the Pennsylvania fields. Now, apparently, Sodus is supplying not only Ontario but New York state lakeports.

Another eye-popper for old timers, new timers and perhaps even you and me are the port figures for Toronto. Last year the total port tonnage was 3,692,000 tons—the cargoes of 14,768 schooners of the old times, taking the Oswego average of 250 tons burden, so as to include the little hookers as well as the canallers.

Fourteen thousand seven hundred and sixty-eight schooners! Coupled bow and stern on the shortest possible towlines such a fleet would stretch from Toronto to Oswego and back to Toronto and almost to Oswego again. Yet one 15,000-tonner, like the Gleneagles which now fills the skyline (and much of the harbor) at the foot of Bay street would carry the cargoes of sixty of these little schooners such as once swarmed the lakes.

Toronto never had 14,768 schooners, nor Oswego 8,051. Neither Toronto nor Oswego had as many as a hundred at any one time. Although possibly a thousand schooner names could be compiled from either ports' arrivals and clearances. Toronto port figures for 1942 show 2,429 arrivals and 2,480 clearances. This does not mean that 2,429 different vessels came into the port, for the same vessel might be down on the harbor books a hundred times or more, like the Fontana at Oswego. Anyway, it's a big showing.

Sir,—I have just finished this week's "Schooner Days," my favorite Sunday reading. I have often wondered if you have written, or will be writing, of a boat named the "Jura."

Since I am particularly interested in her history, could you enlighten me or tell me where I might find the information?

Thanking you for many enjoyable articles, I am

THERE was a picture of the Jura in recently through the kindness of Capt. Peter B. Shaw, Mount Joy avenue, Toronto, who might be able to tell you more than my meagre information. She was a fine little schooner, commemorating the mountains of Jura, dear to the Hebridean hearts of Cramahe Township, where these Highlanders settled, and where the vessel was built by Capt. John Shaw in 1862.

It was at the old official "Port of Cramaha" in the marine registers. The port does not seem to have had an existence otherwise, and it comprehended Colborne, Lakeport, Keeler's Creek and Lead Creek. The Jura was 88 feet long, 20 feet 3 inches beam, 7 feet 6 inches depth of hold and 96 tons register. She could carry 8,000 bushels of barley and was a money maker. Capt. Shaw sold her and her new captain and owner got her ashore on the Duckling Bar at the entrance to the Upper Gap, in a snowstorm. He was a sick man at the time and had to be taken off in the lifeboat with his crew. The staunch little Jura worked herself free and sailed on up the Gap through the Timber Island passage under bare poles before a stiff southerly blow, going too fast for the would-be salvagers who chased her in the hope of making a good haul. She struck on Cape Versey and there went to pieces. Her maintopmast was long afterwards a flagpole for a residence on that beetling cliff. Sailors and even official records often miscalled the Jura the Jury, but of course no Hebridean was never guilty of such a solecism. 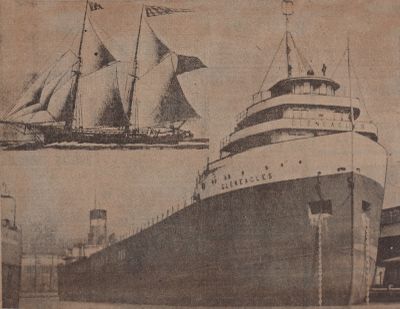