WHAT a vista opened up for the right eyes at the Mariners' Service in Cherry Valley last Sunday!

There was an earnest little girl, Guide Leader Ruth Walters, reverently hoisting the ensign in honor of the dead of a year. Leading Seaman Calvin Grimmon's name led all the rest, and properly, for he was Navy—first Prince Edward sailor to seal the effort of Canada and the United Nations with his life-blood.

His parents were in the church, too, and his brothers, both in navy blue, the big one home on leave, a fine, strapping young seaman, the little one home so far because they won't give seven-year-olds commissions. He wore a sailor's suit sent him by Cal before he was killed and he is going to be Admiral of the Fleet.

The bright young guide leader was heartened by the smiled blessing of Third Officer Nancy Pyper, W.R.C.N.V.R., trig in her tiddley uniform of navy blue with anchor buttons shining like gold. Third Officer Pyper is, in the camouflage of our time, a Wren, which the Axis probably still believe to be a land-bird—but Ruth Walters knew better. Between the pair, when the Red Ensign rose proudly against a background of fishing nets from South Marysburg Township, was a lifebuoy with the answer on it. It was from the trim yacht Sea Bird, owned by Herbert Daubney, of Picton.

One might not recognize the historic Huguenot D'Aubignes of France and Switzerland in the title so long Anglicized, but Mr. Daubney's choice of the name for his yacht indicated his immediate ancestry and kinship with the guide leader.

He is a grandson of the late Capt. John Walters, of South Marysburg, Calvin Grimmon's home, and "Sea Bird" commemorates his grandfather's schooner Sea Bird, once well known on Lake Ontario, Her white oak timbers have been gathering moss in the deep still water at the head of Picton Harbor below the Prince Edward Yacht Club for half a century.

THIS SEA BIRD was a 300-ton schooner, two-masted and scow-modeled, built or rebuilt by the famous John Tait in the yard east of Cooper's Wharf, in South Bay, when this Dominion was a two-year-old.

Capt. Walters, farmer, sailor and fisherman, though no relation to Angus, of the Bluenose, was one of the great figures of the southeast corner of Prince Edward County where the land was never so rich nor the crops so good that people could ignore the wealth of the lake. He had 300 acres on the "Landing Point," terminating in Point Traverse, or South Bay Point. He used to rent the Main Duck island, twelve miles away, to pasture his cattle in the summer, carrying them over and back in the small schooner Jessie Brown. She supplied Cooper Brothers with goods from Kingston, and freighted Prince Edward hay and grain and fish into that emporium when she came for the carpets and calicoes, lamp chimneys, thread, salt, sugar, crockery, tea, coffee and whatever South Marysburg couldn't raise for itself.

Another enterprise was a sturgeon pond in which he stored sturgeon for the market. One of the late Capt. Nelson Palmatier's best stories was of his old friend Capt. Walters wading in and wrestling barehanded a giant sturgeon, like Tobit did in the Apocrypha with the Angel looking on in Capt. Palmatier's position. The fish—or the water—threw Capt. Walters on his back but he would not give up and dragged his prize to shore. And ultimately to market via the Jessie Brown.

CAPT. JOHN WALTERS, "that kind hearted man," as an old Prince Edward ballad calls him, was always doing a kindness for someone. One of his many was when he came into Oswego from Trenton with a load of lumber in the Sea Bird, in November, 1878, on the tail of a blow that had tied up shipping on the lake. On Hallowe'en a young man had been blown out of the anchorage under South Bay Point and across Lake Ontario in a freezing gale. He and his boat washed in, one mass of ice, at Stoney Point, miles below Oswego, driven blindly towards the light-house that had shone in vain that bitter night of All Souls.

The unknown stranger was buried in a nameless grave at Henderson Harbor. Capt. Walters heard of this, drove to Stony Point, examined the yawlboat in which the boy had come. He saw it was the Julia's, which was sheltering under South Bay Point along with the Ariadne, Huron, Olivia and ten other schooners. So he drove on to Henderson Harbor and had the grave opened. The unknown was Moses Dulmage, just turned twenty-one, son of a neighbor, Philip Dulmage. Capt. Walters brought the boy's body back with him to the Sea Bird, and sailed him home to South Bay.

It was the most impressive funeral a lake sailor ever had. Seventy-five vessels had been storm stayed in Oswego, and those bound to the north or westward put out with the Sea Bird when the weather permitted.

They stood with her and other Prince Edward vessels across the lake on the port tack until they sighted the Ducks, their flags at half mast. Then the fleet for the westward dipped their colors in farewell, tacked to starboard and mastheaded their jacks, burgees and ensigns, and the northbound ones stood on up through the Upper Gap for Kingston, or the Bay of Quinte, dipping their flags, too, in the last good-bye. Her drooping flags brushed by herring gulls and coween crying a requiem, the Sea Bird turned in past the Little Red Onion light—green now, for the airforce boat harbor—to lay down Moses Dulmage's body in the old South Bay cemetery where his sister and parents and grandparents sleep.

Capt. Walters owned and sailed several vessels beside the Sea Bird. One was called after himself, the John Walters.

She was a rebuild, by John Tait, at Picton in 1874, of the Susan Bond or Sarah Bond, and Capt. Will Ostrander sailed her. The Sarah Bond was built by George Thurston at Kingston in 1852 and measured 200 tons.

She was owned by F. H. Bond and Co. of Oswego and classed pretty low in 1864, so ten years later she needed rebuilding. As the John Walters she was a fine vessel and took a new lease of life and had 300 tons carrying capacity. Capt. John MacAulay dismasted her in Lake Erie when he was bringing her to Southampton for the McLeans in the 1880's, but she was refitted and prospered until driven over the Devil's Island shoals and wrecked on the Rabbit, near Cove Island, at the entrance to Georgian Bay.

Another schooner in which Capt. John Walters had an interest was the Picton. Her model was in the chancel at this Mariners Service, under another one of the Sea Bird's lifebuoys, and some good stories were told of her. They must keep till next week.

There really was a great deal to see and hear at the Mariners Service if one's heart was open.

A CORNER IN SOUTH BAY CEMETERY, SOUTH MARYSBURG TOWNSHIP. PRINCE EDWARD COUNTY WHERE MANY WANDERING SEABIRDS HAVE FOLDED THEIR WINGS 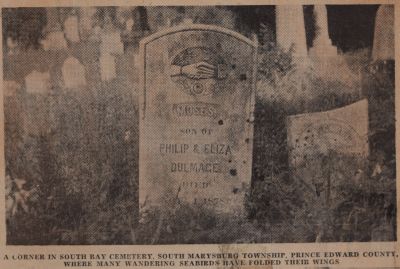 At the Mariners' Service in Cherry Valley
Groups of Related Records