I. When Wait Hudgin Risked His Life Three Times In One Trip

YOU see that little white model of a full-rigged fore-and-aft schooner —- circled —- at the Cherry Valley Mariners' Service?

Year after year that model has gallantly waved farewell to the Prince Edward sailors going to their ships in spring, ever since Capt. Nelson Palmateer started the services. It's the schooner Picton, in which he sailed with his friend Capt. John Walters. It comes annually from the home of the late Edward Rorke, who was mate in her many years. It was made by Alex Rorke, his adopted son and annually it goes back to his home for another twelvemonth.

Capt. Walters, who had three hundred acres near Point Traverse, also had several schooners, among them the Sea Bird, commemorated by the lifebuoy showing above the model of the Picton.

In 1880 Capt. Walters sailed the Picton over to the Main Duck to take off some families who were marooned there after working during the summer on his farm there or at the fishery. On the way back he discovered the missing Prince Edward County schooner Olive Branch, which had disappeared in a blow. She had gone down with all hands off the Pennicons. Capt. Walters brought home the first news of the tragedy.

Mrs. Edward Rorke might might also be considered a founder of the farewell services for she took part in them regularly until her health made it impossible for her to be in crowds. The Mariners' Services cram Cherry Valley church from keel to carlins.

One story she has of the Picton was when her husband was mate in her under Capt. McMaster, and Jake Hicks, Wait Hudgin and Barney Trainer, all Prince Edward County men, were the crew. This was about 1892.

They loaded lumber at Gilmour's mills in Trenton, with the Nellie Hunter, Capt. Murney Ackerman. Each vessel had a deck load as high as her sheerpoles, six or eight feet above the deck, with their sails reefed and booms topped up to clear it so that the big lower sails waved aloft like the wings of a gull settling on the water. The deckload was secured by planks upright, inside the bulwarks and chains crossing it from covering board to covering board.

They came roaring down the Bay of Quinte, racing each other for Oswego. The Hunter got away in a lull under Captain Johns' Island (long since renamed Foresters) and was leading down the Long Reach, when the davit tackle of the Picton's yawlboat let go in a puff and one end of the boat, which had been hoisted up across the stern, dragged in the water like a brake. Wait Hudgins seized the boat's painter and tried to release the davit gear so as to straighten the yawlboat up for re-hoisting, when both tackles unhooked and the painter jerked Wait overboard.

Jake Hicks hove him a long line. Dragging through the water at nine miles an hour and holding the yawlboat painter in his teeth so that the boat would not escape him, Wait made the line fast around his body first and then to the yawlboat, and the crew hauled them both alongside. They got him aboard more dead than alive.

The Hunter had got further ahead in the melee and entered the lake first when they went out through the Upper Gap and squared away for Oswego. It was blowing fresh outside with a big sea, and both vessels rolled terribly. The Picton's deckload began to shift, and she flopped over on her side at a dangerous angle. Capt. McMaster thought he might have to let the deckload go to save her, but Wait Hudgin said he would go over the lee side if they would lower the yawlboat so that he could work from it passing back the planks to the crew who could pile them back, to windward.

He did this at great peril of being crushed by the sliding load or jammed between the ship and the yawl. Then as she went clear of the land the deckload soaked up tons and tons of ice and spray as the seas burst in to windward and she began to list to the other side and the deckload shifted again. She flopped almost completely over on the other side, and was only saved from capsizing by the fact that she was now leaning to windward and the pressure of the wind on her sails helped hold her up.

The Hunter was in equally bad case, with so much water in her she could hardly be steered and her crew could not leave the pumps. The wind was fair for Oswego and the crippled racers limped or drifted before the gale. They signaled the Steambarge Resolute, Capt. Gowan, and the Reliance, Capt. Doherty, but these could only steam on to Oswego and tell the tug to hurry out, that two lame ducks were coming.

When the Rescue sighted them she could hardly decide which needed help most, but the Picton had rolled ahead of the Hunter, so they took her first. Her deck was at such a steep angle that the crew could not get sail off her inside the harbor, and her deckload and booms projected so that she could not be brought alongside the dock. But once more Wait Hudgin tackled his old friend or enemy the yawlboat and by means of it got lines ashore while the tug held her against the wind. Once the lines were fast the tug went for the Hunter and brought her in with her decks awash, floating only on the buoyancy of her cargo.

Wait Hudgin was a married man with a family when he thus risked his life three times in one trip. He kept the "Little Red Onion" light at South Bay Point for years, and lived until 1933. He sleeps in the old cemetery beside the Cherry Valley church, where the Mariners' Services are held. 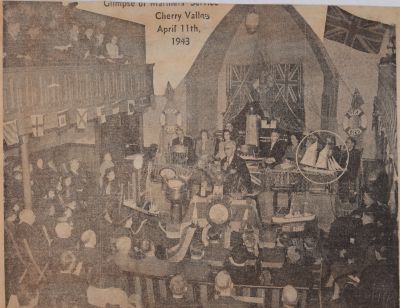