Publication
Toronto Telegram (Toronto, ON), 1 May 1943

II. The Devil Sets His Traps, the Captain Loses His Hat, and the Ship Comes Home a Brindled Muley.

CAPT. FRANK McMASTER, of Toronto, later lost with his three-masted Emerald, had the smaller schooner Picton for years when he lived in Deseronto, and he certainly let no grass grow on her bottom.

In the year 1894, on the 4th day of November, the schooner Picton lay moored to the docks at Shannonville, that now forgotten port in off the north side of Big Bay below Belleville and Point Ann. She had taken on the first part of her load (which was barley) at Deseronto, and finished at Shannonville.

The day had been fairly warm and one would have imagined that we would have very favorable weather, for that time of the year. But after the noon hour the sky began to have long, white shooting clouds stretching across it to dim the blue and spoil what had been so bright a day. About three o'clock the air began to change and a damp, chilly wind sprang up. The sun hid behind a huge black cloud.

The schooner was ready to go out when an old Irishman by the name of Pat Malone, who always worked on the docks, came aboard and said to Capt. McMaster, "Are yez goin' out this night?"

The captain answered, "Yes, I believe so."

The old fellow said, "By gorry, ye'd not better, because the devil is settin' his traps for a bad one, I can tell yez."

Ed Rorke was mate and all of the crew except one hailed from South Bay, Prince Edward County. The mate asked the old fellow how he knew. Pat wet his finger and held it up.

The captain stood looking at the sky. Shortly, turning to his mate, he said, "It won't be much. Get ready to go out."

Soon the vessel sailed down the Bay of Quinte, through the Belleville Reach and around Capt. John's Island and down the Long Reach.

Then, turning at the Stone Mills of Glenora, she tramped down the Adolphus Reach to Indian Point and so out the Gap to Lake Ontario.

COMPANY IN THE SNOW

The wind had swung around to the northwest and was freshening fast. When they got outside it was blowing a gale and spitting snow. They kept on until they were almost south of the Main Ducks, where they closed upon the schooner Julia, sailed by Capt. T. L. Van Dusen. She had loaded grain at Kingston and came out the same night, the converging courses bringing the schooners close together as they rounded the Ducks.

The gale blew almost hurricane force and the snow was coming on heavy so both schooners tried to tack and go back. The wind was so strong neither could make it. The Picton careened over until her rail was under before she gave up the attempt. The Julia did almost the same. The clouds broke for about five or ten minutes, both vessels sighted one another in the clearing and with their sails close reefed, wing and wing they both started across the lake together.

The mighty wind, the smothering snow and the maddening, climbing, tossing water gave them a wild passage.

On board the Picton, the mate, assisted by one of the crew, kept the wheel all night. The waves very often washed over the schooner's yawl boat on the davits astern, drenching him at the wheel.

Once in a while they could sight the Julia through the snow. The schooners were both good sailing ships and through the mercy of God they found they were going to make it, for illuminating the sky through the snow clouds they saw the lights from Oswego. The clouds lifted for a short time and both schooners sailed in side by side, wing and wing, not shortening sail till right at the pier to overcome the backwash.

The mate said he had sailed in many a storm on salt and fresh water, but he was never in such a blinding snow or such a treacherous sea and he never saw anything so welcome as Oswego Light.

It being the last trip over, both Capt. McMaster and Capt. Van Dusen were presented with new fall hats in Oswego.

The Picton was there for three days and then went to Charlotte to load coal for Deseronto. Again, as they were ready to go out, the wind freshened to a gale. Capt. McMaster, who had been up-town, came aboard and told the mate to get ready to go. The mate said, "Captain, this looks pretty bad to go out in." But the captain, proud of his new hat and his good little ship, said he was going just the same. The Singapore of Kingston was in a hurry to get home. She was a very smart looking vessel with a scroll and trailboards. Capt. McMaster felt his plain Picton could show the Singapore what a real hurry was like so out he went, setting both gaff-topsails.

"We'll soon be back here with that tied up and not much below it," said George Bongard to Ed. Rorke as they sheeted the fore gafftopsail home. His words came true-—but not altogether.

When they were ten miles out the wind came around straight ahead and the captain's new hat blew overboard. He found that they would have to turn back and under great difficulty they got the schooner around and started to run again for Charlotte. They came back tearing like a raging fiend. The fore gafftopsail sheet had jammed in the sheave of the gaff and they couldn't get the foresail off her. They tied up the main gafftopsail and lowered the mainsail, but had to leave the rest to hang or blow out. The press of headsail on her drove the straight-backed schooner through the water like a torpedo, the seas marching over her in threes as though she were a submerged dock. It was impossible to shorten sail further after they entered the piers.

Capt. McMaster was a grand hand with a vessel, and he zigzagged from side to side to take the way off the Picton in the shelter of the harbor. Yachts filling the basin, ready to be hauled out, drove him from the east side. The slag piles, old timbers and concrete blocks of the old iron foundry site stopped him to the west. He had his anchors ready, but was unable to drop them lest he overrun them in the shallow water and tear the bottom out of the Picton on their flukes. He tried to catch the quarter of the large schooner Straubenzee, moored in the river, and the fluke of the Picton's port anchor gouged her bulwarks and tore out five stancheons, and the line he got on to one of her timberheads, snapped the timberhead off and hurled it twenty-five feet in the air, almost killing one of his own crew.

They blew the horn for the bridge but before the tender could get it swung the Picton crashed into it, ripping the gear of the swing bridge and tearing her fore topmast out and damaging her jib boom, all her jibs and her foresail badly, simply stripping her bowsprit. The topmast snapped short and struck the windlass whelps, or it would have one through the deck. Her jibboom of stout hickory held, but it was almost sawn through by the ironwork of the bridge.

It cost poor Frank McMaster all he made in both trips to pay for the bridge and get his vessel in repair, and his crew quit after this second experience. Most of them left and came home on the steam barge Saxon, with Capt. John Vanalstine to Smith Bay, west of Waupoos Island.

Capt. McMaster picked up a crew in Charlotte and got the Picton into some workable shape and brought her home to Deseronto, looking like a brindled muley cow, most of her her headgear being still missing and her remnants of sails forward patched like a log cabin quilt and matching the scrapes and scratches on her battered buoys.

"I am a very interested and regular reader of 'Schooner Days,' and have often wondered why the back chapters have never appeared in book form.

"Can you throw any light on the history of the old passenger hulk that lay for years on the beach at old Munro Park in the east end of the city?"

I don't think you mean the steamer Alexandria, wrecked in 1913 considerably east of Munro Park, for she did not lie for years on the beach She broke up that same summer, although her boilers have been visible till recently. At Victoria Park the large timber tug W. T. Robb, which carried troops in the Fenian Raid, was beached in 1890 to protect the wharf which used to project where the new waterworks palace now shines. She lasted much longer than the wharf did, and stayed there until the completion of the waterworks a few years ago. Then she took her old bones west, moving a little with the spring ice shoves each year, until she bedded down a mile away near the Balmy Beach Clubhouse. And I'm happy to tell you that despite this year's phenomenally high water and last week's phenomenally hard east blow she's still there, and likely to stay. For a few hundred dollars all that is left of this old Fenian Raid veteran, Canada's "navy" before the first Dominion Day, could be trucked into the middle of the adjoining park and preserved for all time.

As for Schooner Days in book form. That will surprise you one of these days.

SHANNONVILLE'S OLD MILL, built 1856, near which The Picton finished loading barley for Oswego previous to a wild passage.

A painting by Manley Macdonald 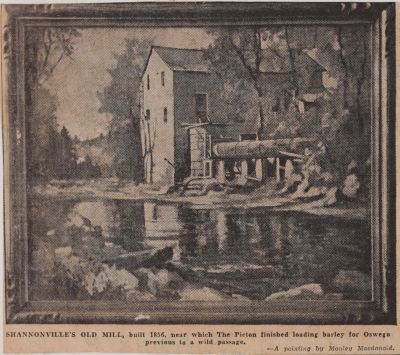