Publication
Toronto Telegram (Toronto, ON), 8 May 1943

III. The Schooner, Launched With the Dominion of Canada, Drops Into a Bottomless Hole on Dominion Day

"JIB PICNICS" is an expression the late Prince Edward County warden, Amos McDonald, who kept the light for a long time at Wicked Point, sometimes used in telling of storms and wrecks and rescues there. The warden was a master of good phrases, some of his own coining, but jib picnic seems to be authentic Prince Edwardesque for adventure under sail when heavy wrestling with the elements is involved.

The Picton of Picton had plenty of these. She loved a fight with every fathom of her straight-lined hundred-foot length, and she had skippers who indulged her taste.

GEORGE W. BONGARD, of Picton, who was in the schooner bearing the name of his town on her stern when she made the spectacular return to Charlotte in 1894 and couldn't stop till the swing bridge stopped her, is still alive and well though past eighty. He adds to last week's story on the Picton's wild ride which reduced her to the appearance of a muley cow, that they had come to Charlotte in the first place with a last-of-the-season load of cedar ties and posts. In haste to get home before the freeze-up and the rival schooner Singapore they started for Deseronto with the portents against them, and had to run back to Charlotte when ten miles out—and couldn't stop when they got there.

The Picton was black painted in her last days, with a crimson beading and a few planks of lead color in her underbody, showing only a thin sliver of pearl grey when she was loaded. Her straight sheer and low steeved bowsprit and the short crook of her cutwater knee, and her red-eyed hawsepipes on either side her black stem gave her rather the look of a helldiver. She was the only schooner of her size we recall having as many as three chain bobstays holding her bowsprit down. Most of her life she was meek and maidenly in white, as shown in her model annually displayed at the Cherry Valley mariners' farewell service. She was then lead color or green below her load waterline, and trimmed with lead color or green, coveringboard and rail. She was hardly handsome, looking flat and slabsided among the high-sheered Prince Edward vessels, especially as she straightened out with heavy loads and hard driving. But for all her bluff bows she could sail like a witch and she was a good carrier. Her long wide deck made her handy in the lumber and shingle trade, where the more you could keep out of the hold the less time you lost loading and unloading, and she took a good cargo of grain, 10,000 bushels, for her hundred-foot length.

She was an inveterate racer, and between her innate speed and the fancy kites she got from the first Oriole, she trimmed contemporaries so badly in the schooner regattas they used to hold at Cobourg that the losers wouldn't buy groceries at the store kept by shore relatives of the winner. That was when Capt. Dan Rooney had her. All her life she was game to take on any vessel of her size, either for the harbormaster's hat for the first arrival, or first place at the elevator or coal trestle for unloading or loading.

Built by the well-known shipwright John Tait for Hugh Gawe at Picton in 1867, when Canada first became the Dominion, the Picton had many adventures. She began well plastered with mortgages, as often happened before a vessel was launched, but she paid them all off, for she was a moneymaker in the barley days. Capt. James Brown was skipper of her in 1871. In that year she ran on Nigger Island at the Narrows. Coming up the Bay of Quinte in a fog, with the wind blowing hard from the southeast, she went so hard in the puffs she could not alter course in time, although the island had loomed through the mist ten minutes before she struck. She was lightered off by a small Belleville schooner.

The Picton kept going until the last Dominion Day in the old century.

Old Capt. Savage said the Minnes would go too, then, and asked Capt. Bongard to let him out, as the Acacia was lying moored outside the Minnes. Capt. Bongard said he would start also, but he would first reef his mainsail.

On the First of July, 1900, the Picton, with a new master, Capt. Sidley; the Acacia, Capt. Byron Bongard, and the Annie Minnes, Capt. Jas. Savage, were lying in Charlotte, loaded with coal for Canada. The weather was bright, but the glass was low. The Acacia and the Minnes made no preparations to go out, but Capt. Sidley came down from the Customs office and called "Strike the fly for the tug. The Picton never waits for weather." He was new to her, having sailed—-and lost—-the large ocean-crossing schooner Edward Blake on Lake Huron previously.

Old Capt. Savage said the Minnes would go too, then, and asked Capt. Bongard to let him out, as the Acacia was lying moored outside the Minnes. Capt. Bongard said he would start also, but he would first reef his mainsail.

So they went out into the lake that bright, cold morning—it was cold enough for overcoats on land, although the first of July—the Picton an hour ahead of the others, setting all sail, Minnes next, and Acacia a couple of miles behind her by the time she got the reefed mainsail set.

The wind bit it strong, a rising gale with a tumble of leftover sea from the westward. The Picton always was fast and she ran like a scalded cat. Soon the following schooners saw the Picton's topsoil coming off her and then her lower sails settling down. They thought she was going to reef, but with the peak of the foresail and mainsail still aloft she suddenly went out of sight as though she had fallen into a bottomless pit. Capt. Savage, a devout Catholic, said to this son, Will, who was his mate and at the wheel, "Drop your vessel down, Will, and see what's happened." He'd crossed himself and fell on his knees on the deck. When he rose from prayer they were ploughing through a few loosed gratings and a sailor's cap was tossed up on a wave crest. The Acacia, ten minutes later, recalled not even these melancholy traces. It was long afterwards that the schooner Straubenzee picked up a floating main boom - the Picton's. That was all that was ever found of her and her crew.

The Picton Lying in Gananoque Harbor 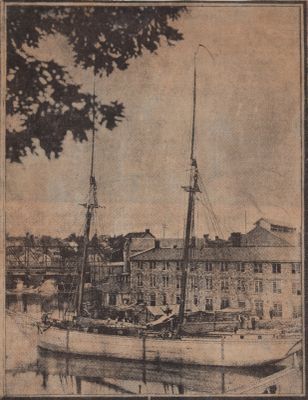