WE lived in a lavish way when Canada was young and poor. Fancy a summer hotel putting up a solid silver trophy of a lighthouse for one race now in 1943, when you can't get a drop of gasoline for the purpose of attending a regatta! Yet that's what Messrs. McGaw and Winnett, who had the old Queen's Royal at Niagara (and the more famous Queen's Hotel in Toronto) did in 1870, when Confederation was just three years old. The silverware is now a cherished possession of a gentleman in Cobourg, whose father, a dashing young soldier, won it five years before the said gentleman, who is no longer young, was born.

BIT by bit the life story of the great yacht Gorilla, almost lost in the mists of memory, is coming back. The silver lighthouse, shining modestly in Cobourg for seventy-three years now, sends another gleam across her vanished wake.

Gorilla was the most sensational yacht of her time in Canada. Said to have been designed and built by George Steers, creator of the world-famous America, and to have originally borne his name, (W. P. Stephens, that veteran chronicler of yachting, has not been able to find confirmation of this) she came to Lake Ontario by way of Rochester probably. She won the Prince of Wales Cup four times and a great many yachting trophies in the sixth and seventh decades of the nineteenth century. Mr. Fax Gifford, of Cobourg, who has the silver lighthouse has also a silver medal, commemorating the winning of the Prince of Wales Cup by "Gorilla, sloop, Capt. C. Gifford owner," in 1872. This was the last time she won the trophy, which is a very impressive piece of silverware dating from the visit of the Prince of Wales to the Royal Canadian Yacht Club regatta in 1860.

Held by the club, it is a royal gift, raced for annually (except in war time) by the whole fleet. Winning it once is a high tribute to the skill of the skipper and the speed of the ship. Winning it more than once—and especially under different skippers—establishes a yacht as cock of the walk. Gorilla won the cup in 1862, 1863 and 1864 when owned by R. W. Standly, of Cobourg, and again in 1872 after being rebuilt, when owned by Capt., later Lieut.-Col., Charles Gifford. Mention of the rebuild brings up another point about the Gorilla. She was originally a centre-boarder, and Capt. Donovan, of Cobourg, who sailed her against the Ida of Montreal in 1870, won the finish, if not the contest, by replacing a broken centreboard by shoving the cabin table top through the empty slot. Was the Gorilla rebuilt with a standing keel instead of a centreboard? The reason for asking this question is that an official list of R.C.Y.C. yachts in 1870-71, which carefully notes which ones are centreboarders, no longer gives such description for the Gorilla. It may have been an oversight, but she is among the standing keelers, which were then greatly in the majority.

GORILLA has been traced as far as 1880 in the memory of G. Herrick Duggan, who was just entering yachting at that time, having designed the yawl Escape the year before, and had her built at Trenton. He recalls cruising in the Escape in company with the Gorilla of Cobourg and the Eudie of Port Hope. The "Great Ape" was apparently looking her years then, for Mr. Duggan said recently to a friend:

"It was one of my first cruises down the lake in the Escape. I think in '79 or possibly the next summer of '80—when we ran across Gorilla at Cobourg starting out on a like venture, and agreed to go in company to the extent that we named a point of rendezvous and departure. That cruise took us down to Alexandria Bay, across to Oswego and Charlotte, and that was the last port I remember her in. The one member of her crew that I recall was Walter Gravely, because I knew him quite well afterwards at Cobourg, when we harbored there in the Cygnet. He went to Vancouver in its early days and had a yawl built in China, of which he sent me some account and photographs.

"I think our crew consisted of Alex. Armstrong, the eldest son of William—afterwards lost in the Nile expedition; Herbie Parsons and Harry Wyatt. My recollection is that Gorilla was a dirty grey at that time, partly because I remember that Eudie, her Port Hope neighbor, was painted green and that otherwise the boats were very much alike in appearance. I quite well remember being told that she had been rebuilt and I think lengthened, but I am not sure of the latter."

REFERENCE to young Armstrong brings in another bit of evidence—-a large sheet of thin folded paper with a browned ink drawing of considerable size, in pen and brush, of a "gorilla proper" as the heralds would say, that is, a figure of the animal in his natural surroundings and pose. In the corner is the inscription, "Capt. Gifford with Armstrong's comp'ts." This was the original design for the Gorilla's private flag, which, as already mentioned, Showed a big brown beast.

Wm. Armstrong, C.E. yachtsman and first secretary of the Royal Canadian Yacht Club, was a draughtsman and artist of pioneer life, and it was the discovery of a wash drawing of his, showing Gorilla of Cobourg in 1870, which brought the old-timer to light last February. This portrait was thought to be the only picture of her in existence. But through the kindness of Mr. Fax Gifford of Cobourg and of Mr. W. M. Gifford of the Aluminum Co. of Canada, a grandson of Gorilla's second owner, two contemporary silverplate photographs, probably by Lawes of Cobourg, have been reproduced. One shows the Gorilla under sail, clubtopsail, jibtopsail and all; her revised rig, for originally her headsail was one big jib, as the Armstrong picture shows. The other photograph seems earlier, for her jib is undivided, although she has a jibtopsail stowed on the horn. She is at anchor, with all her winning flags up, and the recently acquired silver lighthouse is inset in the picture. We have added an inset photograph of her flag design.

"Ugly as sin and fast as Satan," is the traditional description of Gorilla in lake yachting, but it is not borne out by the photographs. They show her snubnosed, over-canvassed and generally shaped like a flatiron, but she has a graceful sheer, if her after overhang does show signs of drooping. Apparently she had no rail or bulwarks, just a chock either side of the huge bowsprit, dying away into the deck. Absence of bulwarks saved a little weight and windage, but to the eye it emphasized the box-like, Noah's Ark appearance of her cabin trunk, which had to be high to give headroom over her shoal floor.

Secret of Gorilla's speed is revealed, in part, by her enormous spar plan and sailspread. To modern eyes she is outrageously overhatted. Present rules would handicap her severely. Judging by the size of the figures shown in the photograph she could not have been much over 40 feet long over all or 30 feet on the waterline. But her topmast truck seems to be at least 67 feet above the deck and her bowsprit speared outboard twenty feet ahead of her. It was 24 feet long altogether. Her sail plan was as lofty as the famous racing cutter Gardenia's, but her displacement was very much less and her ballast was almost negligible. Gardenia had nine tons of fixed ballast, Gorilla maybe nine hundredweight—apart from the shifting ballast of her crew, and perhaps sandbags. Gardenia's lead ballast was all outside, below her keel. Gorilla had n outside ballast at all.

It took great nerve and skill to drive those overcanvassed centre-boarders to victory. They had to be sailed on the trigger, with a hand on every sheet to ease them in the puffs and avoid capsizing. So we leave Gorilla for the time being in Charlotte, the port of Rochester, where she first appeared on Lake Ontario, and where she was last heard of in Mr. Duggan's recollection. It is known that she raced on Lake Erie, and we would be glad to hear of her adventures there and her final disposition. But they bred good men.

HOW'S THIS FOR HIGH?

This mast seems tall as the Exhibition flagpole, above her cabin like a bobtailed street car—but the tall spar is well hung with winning flags. The long bowsprit is an amazing novelty to yachtsmen who know only the knockabout rig of the 20th century. This photograph of Gorilla was taken in Cobourg harbor, 1870. Above, Gorilla's "lighthouse" and flag design.

GORILLA WHEN SHE LAST WON THE PRINCE OF WALES CUP, 1872

Broad, bunty, but jaunty withal, this is GORILLA in her revised racing suit, with divided headsails and a clubtopsail above her already tall mainsail. 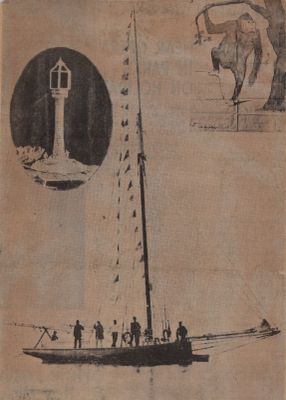