WE left the schooner Katie Eccles at anchor under Timber Island, in the small black hours of the early morning of Dec. 5th, 1922, after her captain, T. H. Mitchell, now of Kapuskasing Ont., had steered her across Lake Ontario from Oswego, N.Y., by her mainsail alone. He had achieved the almost unprecedented feat of navigating Lake Ontario from the south shore to the north, through a snowstorm and without a rudder. Her rudder had dropped off when she was five miles out of Oswego. He had turned her around, tried to get back to Oswego, failed, turned her back on her original course, and brought her across the lake to the False Ducks, off Prince Edward County, and found shelter there; a rudderless voyage of forty miles as the gulls fly, but nearer sixty as the crippled vessel swung now northeast now northwest, all the way across Lake Ontario. Even so, her anchor was on Canadian bottom eight hours after leaving Oswego.

Timber Island, where she found temporary shelter, is a patch of limestone, 105 acres in extent, ten or twelve feet above the water and covered with sandy soil, just enough for a little farming but much better adapted to tree growing. Once it had magnificent oak, pine, hickory and basswood. All the best had been cut when the island was first surveyed in 1861, but there was enough left to build the 400-ton schooner David Andrews, later called Delaware, there in 1878. It was then covered with second growth of good size and is so still. At the time of the first survey ten acres had been cleared and there were the ruins of a log house and a couple of fish shacks on it. There is less evidence of civilization to-day, and there was none at all when the Katie Eccles anchored off it in December, 1922.

The island is inside the False Ducks, about two miles from tip of the mainland of Prince Edward County known equally well as South Bay Point and Point Traverse. The passage between the islands and the point is the lower end of the Upper Gap into the Bay of Quinte. Amherst Island guards the upper end.

To go on where we left off in the story of one who made the rudderless voyage in the Katie Eccles:

"We hung out a light for there might be someone else to come. We pumped her out and went aft and had a lunch, it was just 1 o'clock a.m.

The lighthouse keeper on the False Ducks must of saw us, as he gave us three blasts of the foghorn when we got past. Then the horn blew steady all night.

"We lay there all the next day. It still snowed so that we could not see South Bay Point about 2 miles to the west of us.

"The next morning it was quite clear, and the wind was west. We thought we could get her in to the gap at Indian Point, the Upper Gap, entrance to the Bay of Quinte. Just as we were getting things ready it started to squeal from the west, and the sea was coming ahead of the wind. In less than a half an hour the sea was coming around the light, and we were diving into it so it was coming all over us. She was jumping on the anchor like a mad woman. It looked as if she would pull the windlass over the bows.

"We took chain and passed it around the foremast, to help the windlass. It seemed to be getting worse, and a wild looking morning it was. We had a very good tow-line, and bent it on the chain, and paid out more chain, and took the line to the foresheet post, to ease the strain. The first jump she made afterwards away goes the tow-line, and out goes a lot of chain. There was nothing we could do now, and when she brought up on the anchor away goes the horsepipe down the chain to the bottom of the lake."

Hold everything for a lecture on "horsepipes."

Perhaps in the olden days—the sight is rare now—you have stood on the waterfront and gazed into the open countenance of a wooden ship, steam or sail? It didn't take much imagination to understand what sailors meant by the "eyes of the ship," nor to get the likeness to a human face; the round of the bows were the cheeks, the line of the stem made a long straight nose, and on either side were two quite recognizable eyes. They were circles of iron, the rims of a pair of heavy iron cylinders passing through bow timbers and above the main deck. They were often painted—red, green, black, white or yellow—in color contrasting with the general paint of the hull, and the learned call them oculi, and theorize on the wide spread of the practice, usually attributed to the Chinese, of painting eyes on the bows of their junks so that they could see where they went. Chinese are no bigger fools than the rest of mankind, and if an ancient medicine man sold them the idea of magic pilotage in the dawn of time it is certain that the charm has been continued for decorative purposes, just as we have painted out hawsepipes in contrasting color. There was more magic in steering the Katie Eccles for sixty miles without a rudder than in steering a junk with a painted eyeball.

Hawsepipes, that's what these eyes were; always called horsepipes by the real sailor, who also calls a mainsail a mainsl and a foremast a foremst. But the hawsepipes were not merely decorative by a long chalk. These heavy cylinders of iron were built into the bows for the express purpose of leading the hawsers or anchor chains in to the windlass, and holding them in such position that when the wooden ship was horsing up and down at anchor like a haltered colt that hadn't been broken, she would not part these cables by the short nip the edge of the planks would otherwise give, nor would she be cut down as by a ripsaw. There is terrific friction in a hundred fathoms of chain cable, or even hemp rope, sawing against a weight of hundreds of tons plunging up, up and down under the force of wind and waves. These hawsepipes through which the cable had to pass were carefully moulded, angled and flanged, so as to take up the friction in their smooth, hard surface and ease the strain by giving it direction and control. So if the hawsepipe was torn out, the lifeboat was the next thing to look for, because the chain would cut through the wood. The peril is less imminent in steel vessels for their hawsepipes have been enlarged to built-in chambers big enough to stow the anchor itself, and the patent buffers, springs and stoppers, all of steel, take up the jerks on the cable.

"Then we gave her the little anchor but there was not enough chain left for it to get the bottom and it broke the chain with its own weight when it fetched up as it dropped.

"Then the chain of the big anchor began cutting through the block that the horsepipe was fastened through and it looked just a matter of time before she would cut down to the water line, for the big links of the chain cable were just so many round teeth in a great saw sawing her down from the deck to the water level every time she reared and plunged."

"We put a double reef in the mainsail to help keep her head to and stop her from swinging. Things did not look very good now, I can tell you. There was nothing we could think of to help her, so we got the boat down from the davits astern into the water and got all the grub that was handy. It was a good boat 21 feet long. All the lakers carried good boats as they got old.

"Then we had an awful time to get the boat where we could get into her.

"We got a line from the Eccles' bow and fastened it to the yawl boat and held the painter abreast, and as she would come in close enough to jump, one got in. Then we threw the grub in and he caught it. Then, it was how we could get the cook in. She stayed on the rail at the main rigging and the boat came in so close that she dropped in and the next minute the boat was 20 feet out, away from the Eccles."

"We all got in that way. Then came the captain's turn, last man to leave the ship which was all he owned and had been his home for fifteen years, and no one to hold the painter for him. It was quite a few minutes before he got a chance to throw the painter and jump with it. After awhile she came right back and he jumped, then we loosed the oars and still hanging onto the line, fast on the vessel, we shipped the oars and let go."

"Now we had quite a time to find a place to land as the bank on Timber Island is all rock and about 12 feet high. At the west end of the island there is a little stream that runs out and there is a gravel beach at the mouth of it. We made for there. Just as soon as we struck, the two boys jumped out and held her upright on her keel. The next wave went right over us, and put the boat up in this little outlet, and she never moved. We put the painter around a rock to hold her but we did not need to, for she never moved. We pulled the plug and let the water out for she was almost full and we took our grub and made a fire. It was the 6th day of December and we needed that fire after all the snow and wet and wind.

"Several times we nearly lost all our grub for there were two big bald-headed eagles there, and for all I know they are there yet. They would fly down within 3 or 4 feet of our things and grab at them."

"That night we built a fire on the head of the island so it could be seen from South Bay Point and the next day fishermen came over and got us."

"The poor Eccles lay to her anchor for nearly all the afternoon of the day we left her, and suddenly went out of sight, in water so deep, just a piece of her main topmast was to be seen. I guess the anchor chain kept on sawing through her planks and timbers till it opened her up at the water level and then a lew seas filled her."

"SHE SUGGESTED HIGH SCHOOL CURLS AND PARTY FROCKS" did the KATIE ECCLES, as was said last week, and this glimpse of her beyond the coal piles of Cobourg Harbor bears that out. The picture was taken thirty-five years ago, while the little lady, launched in 1877, still retained her youthful carriage. Incidentally, the stern of the vessel in the foreground, the ANNIE FALCONER, shows a typical schooner's yawlboat on its wooden davits. 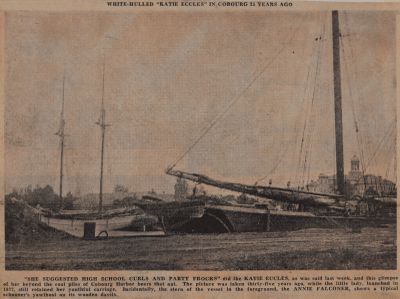