Ancient harbor, once prosperous, once silted up, now practicable for 8 ft. draught - but how!

MIRAGES are not uncommon on the lakes in summer and fall but are not seen often in winter or spring, whichever this season is. They seem to favor this year appearances of ports and harbors where none exist, or have existed. Port Credit is just that in reverse—once a thriving port, practically inaccessible for commerce all this century, and now with a surplus of water on top and enough at the bottom again to explain its ancient prosperity—but no wharves, piers, lighthouse, or public facilities, except a bathing beach lifeguard perch, isolated by the rising water.

We got into Port Credit Saturday evening for the first time since 1920, when we scraped through with the Blue Peter on her last voyage. With the harbor bar-bound for years and the lighthouse and both piers completely gone we regarded this as something like the feat of Drake or Magellan, well worthy of a civic reception. We got one.

The Port Credit Yacht Club gave us three cheers and able pilotage up the creek. When we landed in our best black crown-and-anchor buttons and the new gig—a lovely Aykroyd job in varnished cedar—the rub-a-dub-dub and rat-a-tat-tat of approach drums told us that Peel County was on the march.

Two squads of Reserve, in battle dress and red barreled muskets, swung by, with arms going like pistons and warcries of "H'ya, Navy' A small boy asked respectfully, "Say, mister, where did you rent your boat? I wanta punt to go fishin' and can't find any boat livery here."

What a contrast between the "Port Starvation" or "Port Hardscrabble" of hard times, and the "Gooseport" or "Credit-to-the-Lake" of good times, this modern Port Credit is!

The old dusty two-store Lake Shore road, staked with nibbled hitching posts and promenaded by cows, has become a motor highway with buses, banks, barbershops, cafes, picture places and a post office of palatial proportions. Straggling frame houses that never had a lick of paint from the day they were built have spruced up or disappeared, replaced by architect-designed homes of brick, stone or concrete, set in landscaped gardens where all was the native bush or the broken-down barn and cowshed.

To the east of the old port the "new" industry of this century, the starch factory, which supplied a small market for the farmers' potatoes, has expanded to a huge many-storied works with its own water plant, railway sidings, and a payroll with many more names on it than the whole two-legged population of Port Credit, including the geese, of fifty years ago. To the west of the old port the brickyards have become populated by cylindrical tanks, aluminum painted. Oil steamers load and discharge by pipeline from a crib out in the lake in the spot where the old Augusta drove ashore in 1901, a total loss with some of her 700 tons of coal. A big oil refinery has been built where her shattered masts were dragged inland by farm teams for winter firewood.

But the schooner-thronged port of other years has disappeared. Once we counted thirty-seven hookers and yachts wintering there. The yachts included the old Condor, which drew 9 feet of water, and the Sea Bird, big but shorter in the legs; the Estelle, Gertie, Mollie, WaWa, Wona, and the little Cyprus, Will Fife's first sample of the Clyde-built plank-on-edge cutter. And there were the steam yachts Sonntag and Esperanza, all well known Toronto names. Even the Beaver, Canada's cup defender, wintered there. And the hookers — among them were the Rapid City, Barque Swallow, Margaret Ann, Mary E. Ferguson, Mary Ann, Defiance, Blackbird, Lone Star, Brig Rover, Maud S., Lithophone, Olympia, Reindeer, Lillie, Minnie Dunn, George Dows, Rapid, Newsboy, Paddy Young, Coral, Coronet, Zebra, Lillian, Mary and Whitewings, these last yachts fallen from that high estate into the stone trade. There was the Enterprise, too, and the Hope, and still others. Now there was not a mast, except the beanpoles of pleasure boats, and not many of these. The fishboats, of mackinaw rig, had all turned into long-nosed power boats.

The Lake Shore highway now leapt across the harbor on two handsome concrete bridges, unnoticed by the traffic. It used to creep down to a little wooden bridge, to which even the largish Rapid City could moor, then across an island, and then to a rattling clanking iron bridge where the hookers used to throng, packed so close there was no need for foot passengers to use the bridge they nuzzled. You could walk across the harbor on their decks.

Apart from the five hotels, where whiskey could be bought at 5 cents a glass, the old village was as quiet as a schoolhouse on Saturday, but down at the port it was always brisk and busy, with piles of cordwood, brick, tanbark and building stone waiting for shipment. There was a wharf on the lake front where steamers called daily. You can find the old cribs of it yet, out in the lake. There were two piers, with a hundred foot entrance between, and more wharves inside, before you came to the fishnet reels, whimpering and whispering on their wooden axles as they dried their gillnets in the wind.

A LOVER AND HIS LASS

Fishing was a staple industry. Jack Yorkshire, fisherman, had the outermost cottage and a garden on a point on the west side of the harbor, and there were two other houses on it besides. Point, cottage, houses, and a whole street once paralleling the water, and known as Lake street, have been washed away by the ever-eating lake. Yellow-curled Peggy Yorkshire's lover, crossing Ontario from Niagara in an open winter to keep tryst with her on St. Valentine's Day, was washed up on her father's doorstep months afterwards, and Peggy never married. His schooner, the Nine Brothers, was found on her side, with reefed sails, among the ice twenty miles east of the Niagara Bar. Long ago, long ago. The year was 1845.

Inside Jack Yorkshire's point, in the harbor, were Goose Point and Goose Bay, where rede triumphant flocks of snowy geese. Goose dinners were the chefs d'oeuvres of the Port Credit hotels — and of the many galleys of visiting schooners that lay overnight in the Credit, picking up grain cargoes and unpaid for poultry.

Farmers lined up for a mile back on the Centre road and the old Stavebank road leading down to the lighthouse, waiting to unload their sacks of wheat or barley into Ben Clarkson's warehouses on the wharf, or into the schooners thronging the piers, loading by wheelbarrows.

Every little house had an acre more or less of garden, every other house had an old topmast upended in front of it and a long cone-shaped schooner's fly, or wind vane, swinging at its truck. Very much of a sailor port, for Port Credit mariners were in demand all over the Great Lakes, and went to South Africa in the Sea Gull when she carried the cargo of lumber and buggies and what-not from Toronto to Natal in 1865.

BLACKSMITH WAS SHIPWRIGHT TOO

The only industry apart from the harbor was the village blacksmith shop, and that was not apart from the harbor either, for when the blacksmith was not setting wagon tires, shoeing horses, or repairing ploughshares and coulters he was hammering out ship spikes, chainplates, shackles and caulking irons. There were shipyards on either side of the river — one patronized by Toronto yachts, $10 for a haulout and winter storage, any size—and a third yard, the most ancient, on the bank crowned by the old hotel which had been built upon the side of the old government blockhouse, where presents were given to the Indians annually.

Here the Brig Rover (so christened though she had only a pikepole topsail to merit it was built bottom up, turned over, and launched down a long runway. Here, or just below, was built Port Credit's most ambitious lake offering, the brigantine British Queen.

The British Queen, a brigantine, was launched up in the corner where the big brick post office stands on the bank.

Abram Block, J.P., born 1832, who built the Blue Peter and celebrated her launching by the first ride around Port Credit in an automobile in 1910, as a boy had the privilege of furling the British Queen's royal, her highest sail—a hundred feet above the deck—when she would be moored at the bridge. She was nine feet deep in the hold, and drew as much water as that when loaded, but she used to get in and out without a tug. She was a standing keel vessel. That was long before the harbor dried up, as it did early in this century, when bulrushes grew in the holds of the abandoned hookers.

Now Port Credit, with ten times the population, had no schooners, no lighthouse, no piers, no discernible harbor entrance. But a vast pond of new water in the basin of the river mouth had chased all the lake fishermen out to Ashbridge's Bay, leaving their net reels standing almost afloat. The Port Credit Yacht Club's lighting plant was under water, so was most of its marine yard, and an "inner harbor" had formed behind it, with motor cars splashing through like Venetian gondolas, down the Stavebank road on the east side which since the 18th century has led from the first trading post to the first wharf. It got its name because the schooners used to load oak staves for barrels from the piled up heaps on the shore. In the little public park through which this submarine road now ran men in rubber boots were pitchforking the carp out on on to the road edges like farmers picking hay.

It as only this high water which let us get into Port Credit again, for, drawing eight feet, we would wait until kingdom come or election dredging before we dared tackle the harbor bar, which sometimes has had two feet of water and someones none at all. Norman C. Pearce's Kelnordic, drawing six feet had hitherto held the modern record for deep draught navigation into the Credit, but she got aground so often she went out of commission for the last three years. Now she is happily swimming again. We touched once, perhaps at Jack Yorkshire's chimney, but found more water inside than our 14-foot sounding pole could bottom. Abreast of the Yacht Club where we anchored we had 11 feet.

PORT CREDIT HARBOR, JUNE 5th, 1943, with ketch of 8-foot draught moored off Port Credit Yacht Club. The visitor came in over the chimney of John Yorkshire's cottage, a house similar to the one in the foreground, which stood a hundred years ago on a point west of the harbor, which has completely disappeared.

BULRUSHES THROUGH THE DECKS AND DREDGES NEEDED DREDGING OUT!

PORT CREDIT HARBOR IN 1910 with dredges stranded by the receding water after digging their way in, and the bulrushes growing through decks of abandoned hookers. Watermarks on the sunken hulls show the receding levels of other years. 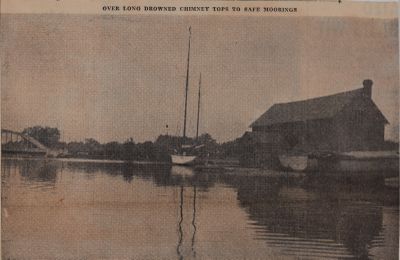