This is the 600th number of the Schooner Days feature, begin in The telegram in 1931

"O IT'S all around the Presqu'isle buoys

The lake gulls flit and skim,

They all join in the chorus

Of the Persia's funeral hymn.

They skim along the water's edge

And then aloft they soar,

In memory of the Persia's crew,

ABOVE is the last verse, cobbled if not improved, from a lake come-all-ye popular 50 years since. What might be called a chantey, as that term is now used, although there is a distinction between chanteys and other songs. Chanteys were chants or work cries arranged so as to lighten labor by bringing about unity of effort and timing it to the best advantage. Songs of the come-all-ye variety are for entertainment and refreshment when the work is done. Their usual pattern is to begin "Come all ye" — jolly sailors, shepherds, shantymen, friends and neighbors, cowboys, or whatever the singer fancies. The supposed audience is forgotten after the invocation.

What was the Persia?

Apparently an Oswego schooner whose loss with all her crew impressed lake sailors generally, for the song was a favorite in the repertoire of that lake bard Mike Fineran of Milwaukee. Capt. Will Head of Picton recalled it as being sung when he was a lad in the "timber drogher Bigler belonging to Detroit," which Fineran also made famous.

There is a record of one schooner Persia being lost in 1892 on Racine Reef (which one would expect to be on the west side of Lake Michigan), and another schooner Persia which sank off Long Point in Lake Ontario in 1894. Neither of these fit the "Presqu'isle buoys" and "Lake Huron's rockbound shore," although there are enough Presqu'isles to serve all the Great Lakes.

The Hamilton schooner Persia, lost on Long Point, was built in the Ambitious City in 1868. In 1864 there was a schooner Persia of 130 tons register, built by D. Barrett in Chicago in 1856 and owned by H. T. Rugar. At the same time there was a schooner Persian, of 345 tons register, owned in Oswego by Dane, Fullington and Co., having been built there by James Navagh in 1855. We shall rely upon our two Oswego friends, the Palladium-Times and the Chief of Police, to give us further light on Dan Sullivan, that heart so brave and bold, and his schooner. Oswego was a great schooner port and the Sullivan's, O'Briens, Desmonds, Navaghs walked the cabintops of many vessels with "of Oswego" on their sterns.

THE original of the come-all-ye is thus recalled by Mr. H. Walker of Mill street. Picton, and passed on by his townsman, George Bongard. We are grateful for it, and reproduce it not in competition for a literary prize (although it is as original as much Canadian and American poetry), but as a sample of the artless minstrelsy of schooner days.

The opening is typical. You are to imagine the lantern nailed to the paulpost down in the dank forecastle dimly illuminating the fog of pipe smoke as the boys dry out around the red hot stove before turning in for the watch below. Mike Fineran, after a preliminary gurgle, tunes up a high-pitched wailing key, full of minors and weird twists, the air borrowed from some Keltic original which may have sounded through Tara's halls:

"O sad and dismal is the tale

I will relate to you

'Tis of the schooner Persia,

Her officers and crew

That sank beneath the waters

Midst life to rise no more,

Where winds and desolation sweep

"O they left Chicago on the lee,

Their songs they did resound,

Their hearts were full of joy and glee,

For homeward they were bound.

They little thought the sword of death

Would meet them on the way

That they so full of joy and glee

Would in Lake Huron lay.

"Her commander he is now no more,

He lost his precious life,

Far from his home and wife;

While he a heart so bold and brave

Had weathered many a storm.

"O no mother's hand was there to press

No wife was was there for to caress

No brother or no sister nigh,

No little ones to mourn;

Down in the deep he now does sleep,

Far from his friends and home.

"O Daniel Sullivan was her mate,

A heart as bold and brave

As ever was compelled by fate

To fill a sailor's grave;

He shall be mourned as a friend,

But alas his days are o'er,

For in watery deep he now doth sleep

For fate has on you frowned;

They have looked in vain for your return

Back to Oswego's town;

They miss that soft gleam of your eye,

Your hand they press no more,

For now you sleep beneath the deep

"The names of her crew I did not know

Excepting one or two,

Down in the deep they all do sleep,

They were a luckless crew.

Not one of them escaped to land

To tell those mysteries o'er,

But each one found a watery grave

"The mysteries of their fate was sealed,

They did collide some way,

But they will never be revealed

Until the judgment day,

When the angels they shall take their stand

And make these waters calm

And summon forth by Heaven's command

Then follows the verse with which we began.

The name Persia was fancied many years ago. We had a propeller Persia as well as the schooners mentioned. It had been popularized by the Cunard liner Persia, last of their old side-wheelers, which in 1858 was the largest steamship in the then small world, the Queen Mary of her time.

Steamers and steamboating were more picturesque when the Cunard paddle steamer Persia was queen of the world passenger trade and Conyngham Crawford Taylor was head of Her Majesty's customs in Toronto. He thus describes ocean navigation of the time and a passage he made in the Persia then. It is in his book "Toronto Called Back."

"This leviathan vessel, then the largest steamship in the world, left Liverpool on the 26th June, 1856, commanded by Captain Judkins, the Commodore of the Cunard Mail Packets, on her first voyage across the Atlantic. This company having the exclusive contract for carrying the mails, the position of commander of one of these steamers was at that time one of great importance, and the rank equal to a commander in the Royal Navy.

"As the whole continent was on the qui vive for the arrival of these steamers at Boston or New York, when the signals went up by firing guns by day or rockets at night, a whole fleet of steamers and boats of every size were seen racing for the great object. Then the scramble up the ladders, the rush for the latest papers and despatches, and the rush back to the city of news reporters for the daily papers, and the competition to publish the latest news, was a lively scene.

"The captain, in full naval uniform, giving orders through his silver trumpet, before the days of electric bells, as he stood on the bridge was the observed of all observers. If we are about to start, I see him on his elevated position, and it is interesting to notice how quickly and completely the inward thought and purpose alters the outward man. He gives a quick glance to every part of the ship. He casts his eye over the multitude coming on board, among whom is the English ambassador and suite. He sees the husbands and wives, mothers and children, entrusted to his care, the valuable cargo, the carefully counted mail bags, all pouring in, and his form as he gives orders for our departure seems to grow more erect and firm. The muscles of his face swell, his eyes glow with a new fire, and his whole person expands with the proud consciousness of his importance and responsibility."

Mr. Taylor's own passage in the Persia was a rough one, but cheered for him by the companionship of the great, both in endurance and enjoyment.

"This voyage in the winter of 1857-8 was unusually stormy as may be judged by the perusal of the ship's 'log' published in New York papers on our arrival. The statement of having encountered 'tremendous hurricanes,' although rarely reported, was no exaggeration. For several days we 'lay to making about two knots an hour (oh, Mr. Taylor, how could you talk of knots an hour?)—just enough to kept the engines in motion. One of the immense paddle boxes, 40 feet in diameter, was carried away with one sea and other damage done. The voyage lasted over sixteen days, nearly double her usual time. Lord and Lady Napier and suite were passengers, and his lordship suffered greatly from seasickness, while her ladyship, whose cabin was nearly opposite that of the writer, scarcely ever missed her morning salt water bath and was present at almost every meal at the table in the saloon."

Arrival at New York after a record making passage: "The steam was puffing out of her sides in short painful gasps, like the quickened breath of a grand race horse tired and resting after a great burst of speed. The commodore was proud as the proudest man in America as he walked down the noble ship's gangplank (no ship elevators in the 1850's) and then stood up so straight that he nearly fell backwards. No one seems to have been prepared for the phenomenal time made.

Not the PERSIA but an American three-'n'-after which may have resembled her, the schooner FORD RIVER, originally an Upper Laker, brought to Lake Ontario and sent overseas in the last war. This picture of her is a boyhood sketch by Lieut. Rowley Murphy, RCNVR, who is now at sea with the Canadian Navy. 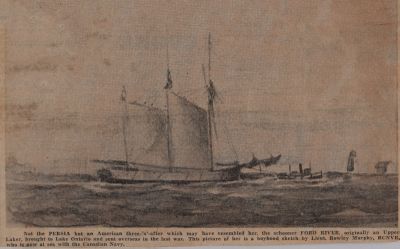