The old ballad commencing "In the North Sea Lived a Whale" has its use now in a facetious adaptation of this line to the needs of a souvenir issued by the people of Superior, Wis., in commemoration of the launching of the first two vessels of the McDougall whaleback pattern, built at the shipyard in that city, an event that took place on the afternoon of the 15th of November last. The two boats went into the water sideways, and floated in their slips as if they were in their natural element.

The somewhat surprising information to an Atlantic coast seaman is contained in the recent report of the Commissioner of Navigation, in which it is stated that the registered tonnage of the vessels inspected on the Great Lakes for the year ending October 1 was in excess of the tonnage of those inspected on the Atlantic coast, and also in excess of the tonnage of those inspected on the Pacific and Gulf coasts and all the rivers of the United States combined. The development of the shipping interests upon this arm of the Atlantic within the past three years has certainly been marvelous, and is a vast testimonial to the importance of that inter-state commerce which is largely the product of the past thirty years. Less than ten years ago a steam propeller of 1,200 tons registry was a large carrier upon the Great Lakes, and its carrying capacity was generally limited to about an even tonnage with its registry by the cumbersome power used and the amount of internal "works" deemed necessary to give it strength and solidity. But since 1885 the size of the lake steamer has gone up as high as 1,900 tons registry, and with a common though varying carrying capacity of from 2,000 to 3,000 tons, with some vessels of 4,000 tons capacity.

The sailing vessel is rapidly passing into the limbo of forgetfulness, and the deep and fast steamer is gathering to itself the business of the lake carrying trade. The lumber traffic still adheres to the sailing vessels, but iron ore, coal, wheat, flour, and merchandise go to the steamers for low rates and quick transit. And the present tonnage of the lakes is kept in an absorbing chase of distances by the enormous traffic turned over to the vessels by the railroads at deep water terminals like Chicago, Buffalo, and Superior.

In the mad rush of invention upon the land, marine architecture was allowed for a quarter of a century in this country to suffer somewhat. Land transportation absorbed all the powers of men's invention. But it was only a slumber for a season. Cheap transportation between the East and West became so important a factor that human nature could not resist the pressure, and so it happens that from the deep water's end in the middle of this continent, where land and water have their final junction, so to speak, from the head of Lake Superior, within dinner call of the farmers of Minnesota and Nebraska comes the latest and most wonderful innovation on marine architecture that has met the waters since Fulton's steamboat was put afloat. Alex. McDougall, of Superior, Wis., an old lake vessel master and agent, is the inventor, and is now at the head of the practical operations of a ship yard at that place which has keel blocks for the simultaneous construction of ten steel vessels, and from which the American Steel Barge Company, the owner of the plant and patents, expects soon to turn out 52 vessels per year, or one each week.

These vessels are built both as tow barges and as steam propellers. The first boat of the fleet (there are now eleven afloat), the tow barge "101," a small craft of 437 tons registry and 1,400 tons carrying capacity, excited unlimited ridicule and amazement among lake vessel builders, but her cost was only $45,000, and in two seasons she has netted her owners over $70,000, in the face of active competition, so that the laugh is now differently located. This boat was built in the summer of 1888, and was immediately denominated "the pig" by vessel men—-a name that clings to all of her kind.

The first steam propeller, the Colgate Hoyt (named after the president of the American Steel Barge Company), was built in the winter of 1889-90, and has been in successful commission during the season of 1890 in the ore, grain and coal carrying trade between Superior and Lake Erie ports. She carries 2,800 tons of iron ore on a 15 foot draught, and readily makes 12 miles an hour with a tow barge in charge carrying 2,400 tons.

The Joseph L. Colby, launched November 15, is a somewhat smaller vessel than the Colgate Hoyt, being designed for passage through the Welland Canal and St. Lawrence River to Montreal. Her dimensions are as follows: Length over all 265 feet, width of beam 36 feet, depth of hold 22 feet. All subsequent steamers of this pattern will be built 38 feet beam and 24 feet depth of hold.

The "whalebacks" are all built upon the same pattern. They are round decked, flat bottomed, and ended up like the pointed end of a cigar. The wheel house on the tow barges is in a mere turret, and the men's quarters (it takes five to man one of them) are under the wheel house. On the steamers, the cabin and wheel house are set up on three turrets. These are the peculiarities that make of these boats a complete revolution in ship building. There is no ponderous bulk above the water to catch and fight the sea in a storm. The water washes over them, not against them. The round deck may make of them the most formidable naval vessel ever built. The flat bottom may make of them famous river boats.

The ship yard at Superior has six "slips" and ten piers or ways for keel blocks, so that ten of these boats can be under construction at one and the same time. And Manager McDougall speculates with some enthusiasm upon the fleet of "steam pigs" which he will send to the St. Lawrence in the fall of 1891 to engage in the Atlantic coasting trade for the winter season.

There is at present a whaleback tow barge lying on a dry dock in New York City, that was constructed at the Erie Basin for the coast and river trade, while two McDougall propellers are expected here in a short time, one of which is to be sent across to Liverpool and one to Puget Sound, on the Pacific coast.

LAUNCHING OF THE JOSEPH L. COLBY, AT SUPERIOR, WIS.

THE COLBY IN DRY DOCK. 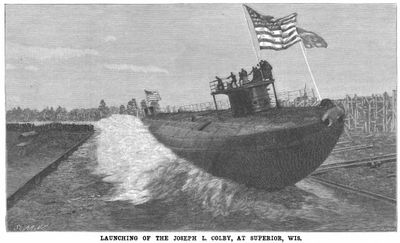 The Colby in Dry Dock