ALEXANDER MUIR, founder of the Port Dalhousie drydock, in his memoirs, in 1890, mentioned his early connection with Calvin, Cook and Counter and some of their earliest vessels.

These, as Mr. D. D. Calvin explains in his admirable new book, "A Saga of the St. Lawrence," were small schooners of less than 100 feet length. But they carried large crews, a captain, mate, cook and four to six men and two horses, to work the timber, which had to be rafted out to them from the shore as they lay at anchor.

In 1839 Alexander Muir had shipped in the schooner GRANVILLE of Prescott, owned by the Calvins, as mate, at $20 a month, with Capt. Gilmore. He had been in her before as seaman at $16 a month, in this hard wet timber trade, loading oak from the beach at Stoney Creek, southeast of Hamilton. Next year he was master of one of the firm's schooners, an old one,, recently purchased and his wages were $40.

This was the BRITANNIA, then hailing from Kingston, opposite Garden Island. "She was an old vessel. She sailed fast, as she had a standing keel and great deadrise in her floor timbers (making her bottom V-sectioned). She carried a (square) topsail and being very stiff when light she would work up the lake against a moderate gale of wind. We were freighting pipe staves (for hogsheads) from the head of Lake Ontario to Garden Island. Her cargo was 7,000 pipes. She drew seven feet aft."

Pipe staves, as D. D. Calvin explains in his Saga, were split from shore logs and limbs of oak, in sizes larger than the "standard" or "West India" stave, which ran from 5 1/2 to 3 1/2 feet in length, up to 5 inches in width, and down to 1 1/4 inches thickness.

The oak blocks or bolts came from the bush 6 inches thick, to make four staves. The vessels had square staveports in their sides, below the level of the decks, for filling the hold from the water before the deckload was built. To allow the hold to be filled completely the cabin was entirely above the deck.

The Britannia is interesting as marking the end of the standing keel era in lake schooners. Muir mentions a centreboard as early as 1837, and by 1860 every new lake schooner had one. The Britannia is said to have been built by Roberts at Wellington Square, the vanished port west of Oakville now covered by Burlington. Muir's reference to her age, model and sailing ability makes it probable that she is the Britannia mentioned in the Landmarks of Toronto.

"There was on the lake in the year 1819 the Britannia, the property of Matthew Crooks of Niagara. She was splendidly modeled, of 120 tons burthen, and was under command of Captain Miller," say the Landmarks, adding incorrectly that she was probably built in York. She must have hailed from this port at one time.

Muir's memoir earlier lists the Britannia in 1837, owned in Oakville and then sailed by a Capt. Boyland. This also may be the same little ship, and the Oakville mention suggests a solution for the "mystery vessel" whose photograph, published last July, and here again reproduced has intrigued many readers of Schooner Days.

The original picture, it will be remembered, was a very early tin-type or daguerreotype, which had been left by the late Capt. Robt. Wilson of Oakville, without identification. The vessel in it was manifestly an old timer, and not of the rig or model of lake schooners from 1850 onwards, the approximate date of the photograph. She had a figurehead and rounded stern, like a packet ship, and her high deck cabin suggested either passenger accommodation or a larger crew than would be required for her tonnage. That she was old was proved by her thick hemp rigging and sharply raked spars, and she had evidently had a square topsail and perhaps topgallantsail at one time, although all the trace of square rig remaining in the picture is one lower yard, with squaresail furled on it.

Many guesses were made at the mystery ship's surroundings—Port Credit, Oakville, Bronte and Picton being among them, but none fitted as well as this from Park Whistler, 1977 Main street, Niagara Falls, Ont., written on the Twelfth of July:

"I would suggest that the mystery ship shown July 7 was moored to a pier at the mouth of the Welland River at Chippawa, Ont. The large barn-like building with the adjacent stack could be the Chippawa Stove Foundry, while the building at the extreme left could be Kirkpatrick's General Store, part of which is still standing. The height of the river bank and the general contour are as they should be viewed from the opposite side of the river. It is also quite possible that salt water vessels were not unusual in Chippawa in the "fifties."

This fits in with early Niagara ownership, Chippawa being accessible by the Welland Canal after 1829 and a point where squared timber was gathered for sending down to Quebec via Garden Island. The background in the picture would not be the long lost Wellington Square, would it? In the absence of any more definite identification we may pronounce the little ship the Britannia and divide the red apple between Park Whistler and the late Alexander Muir of Port Dalhousie; who had nothing to do with either the Maple Leaf song or the Maple Leaf schooner.

Two other lake schooners bore the name Britannia, years later, one built in Saugeen and the other in Port Burwell, and there was, of course, the royal yacht Britannia, the finest sample of the English topsail cutter the world has ever seen, which was given a royal funeral at sea in 1935, after a racing career of forty years.

If you will let Schooner Days have your address (not for publication) will send you copy of a letter mailed last Monday in the hope that it would reach you. Your point is well taken and you deserve credit both for your forbearance and for winning your race under the difficult and exasperating circumstances mentioned. Thanking you for your letter and your good sportsmanship shown. 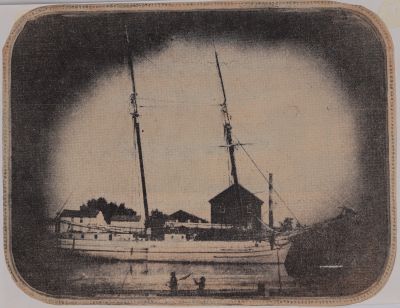