IN more senses than one a brilliant contribution was made to local historical record by Rowley Murphy and the Rous and Mann Press Limited in his picture "The Schooner Fly, James Gooden, Master, leaving Gooderham and Worts wharf bound for Montreal, 15th May, 1840," which became a much sought 1947 Christmas card.

The full size picture is worthy of hanging "on the line" in any gallery of fine arts or of Canadian history or in the corridors of Toronto City Hall. It is the third in a series originating with that historic windmill which gave local topographers the Windmill Line as a base for modern harbor development surveys though the windmill itself vanished almost a hundred years ago.

The old red brick winged tower appears in each of the three, in this last one in the right hand background, so that the beholder is looking down and across Toronto Bay towards ancient Trinity street from the present Ward Island ferry track.

BEFORE RAILS AND RUBBER

And what would he have seen a hundred and eight years ago this coming May? He would have seen

as did the poet Moore. We have difficulty in seeing them owing to smoke, steam and chlorination. In this picture the hills rise in graceful folds back to the Oak Ridges and Markham, blue with distant pine, yellow and green with budding maple, for the forest still clothes the land down to Eastern avenue. Only one curl of smoke mingles with the blue of the sky, where William Gooderham, miller, has added the modern improvement of steam to the "Wind-Mills, York, U.C.," which he and his partner James Worts had begin years before the Mackenzie rebellion.

Around the windmill, which still retains its vans, schooners cluster at anchor, or at the mill wharf. Farther west the horse ferry waddles across the Ward Island track, the gee-gees trudging gallantly around the "horsepower" treadmill which turns the paddle wheels. The old red ensign of England and a blue flag gaily flutter at the stern.

It is the foreground with which we are concerned, however. To wind-ward of a green rowboat towing a scow and a blue sailboat with a sprit-sail-—perhaps the horse ferry's rival—a topsail schooner is flinging her canvas to the breeze for a long voyage. A hand is aloft shaking the gaskets off the main gafftopsail, and two more are catting and fishing the anchor before manning the jibtopsail halliards. The schooner is black with yellow bulwarks and red beading the newly scraped masts and booms have white tips, the red ensign of the British merchant marine tosses at the main peak and a new red fly streams from the masthead.

The whole scene is highly animated—rippling water, a highway livelier than the land with its roads of mud or corduroy, flying clouds, green shores with habitation replacing the forest, and the future skyscraping city front emerging from the wilderness. There is no evidence of electricity, concrete, railways or rubber but plenty of pioneer enterprise and industry.

The scene is naturally highly animated, for it marks a great stride in Canadian commerce — the first export shipment of manufactured goods from the new city of Toronto, "wet goods," 3,500 gallons, consigned per the schooner Fly to Messrs. Murray and Sanderson in far away Montreal. Water was the only way to get it there. There were no railways, nor airplanes, and bush roads, were too rough for haulage except in winter.

Thirty-five hundred gallons, of we don't know what, but suspect it was not maple syrup! The shipment would weigh about 17 tons; not a full load for the Fly, small as she was, but perhaps ballast for a cargo of flour, for the old windmill and its successor ground a great deal of grain for local consumption, and for export.

In 1843, it is stated, the "brig" Pacific made a voyage from Toronto to Liverpool with wheat and flour. We would like to know more of that voyage, and whether the "brig" returned to Canada and was Capt. Robt. Maw's schooner Pacific, wrecked in Humber Bay opposite Colborne, Lodge, High Park, in 1861. But if the first statement is correct it is possible and probable that the flour carried came from the windmill. The Gooderham mill and distillery employed many sailing vessels in its long career. The second picture in the series mentioned shows a fleet of schooners frozen in the bay ice being unloaded in winter and their cargoes being transferred to the mill in sleighs.

WHICH WAS THE FIRST?

PERHAPS it is playing with ideas to proclaim Toronto's first export cargo to be the few bushels of Indian corn for which Father Hennepin's "conducting officer" bartered with the Senecas of Teiaiagon in November, 1678, when he came in the brigantine Frontenac to the Humber mouth.

But there has to be a first time for everything and if this corn exchange did not initiate our export trade what did? And how?

To answer these questions we may have to skip a hundred and sixty years. Toronto had become a practical port by 1793 and built a sizeable armed vessel, the Toronto Yacht, by 1799. She launched her first warship, the 14-gun schooner Prince Regent, in 1812 or early in 1813 and had a new frigate or sloop-of-war on the stocks, the Sir Isaac Brock, and another, a little brig, being overhauled, the Duke of Gloucester, during that same winter.

But battle boats and cannonballs intended for local uses do not constitute export trade. It is doubtful when we began to send out potash, pearl ash or even Indian goods for trading purposes, and the furs which passed through the three French trading posts at Toronto may be questioned as "manufactures" for export. As was only natural with a new settlement, for a long time our wants were so many and our production so small that ours was almost entirely an import trade. In fact the town of York had become the city of Toronto before we began to be able to record outward shipments of manufactured goods and such an export trade was actually initiated. Yet bulk commodities such as potash, pork and flour were shipped regularly by a line of Durham boats (oars and sails) from Toronto to Montreal as early as 1819.

THE FLY? There was a small transport schooner of that name which brought American invaders here in 1813, but it is not likely that this one ever came again, after Commodore Chauncey's fleet sailed home. The vessel shown by Mr. Murphy would be larger, about 100 tons burthen. She is rigged consistently with her period, having a square, foresail loose footed. The rig is confirmed by a contemporary drawing of the schooner Jessie Woods leaving Niagara in 1836, and a lifetime of nautical research on the part of Mr. Murphy. The contemporary, Ann Brown, although only 36 feet long, was similarly rigged.

In 1851 Toronto had three steamers, the Champion, Mayflower and Highlander, plying to Montreal in a "through line," Mondays, Wednesdays and Saturdays, with passengers and freight, and by 1855 ships, barques and schooners were sailing from Toronto to England, Europe and South Africa. The sailing ship cargoes were principally forest products, and later oil, but an interesting example of export manufactures were the knockdown houses and buggies which formed part of the cargo of the Toronto "brig" Sea Gull for Natal in 1865.

We have not been able to find this Fly in early Toronto shipping lists. The earliest compilation goes back to W. H. Smith's "Canada," 1851, listing 31 Toronto schooners, the Pacific included, but it may not be complete, or the Fly may have gone away. A vessel of that name owned by W. C. Boyd is said to have been Owen Sound's second schooner, we know not when. The Pacific, Capt. Robt. Todd, was advertising cargo space for 200 barrels of flour for Halifax in 1849.

Last season there were 2,461 vessel arrivals in Toronto harbor, with 3,683,965 tons of cargo. The same ship might come in dozens of times, but each time with another cargo. In the same eight or nine months 2,469 vessels "cleared," that is 2,469 departures were registered, often dozens of times of the same vessel. They took out 423,984 cargo tons in the season, but how much of this was export manufactures, wet or dry, we are not able to state. But the whole a large increase over the initial 17 tons of the Fly in 1840 — 24,940 times as much.

Sir—What you wrote in Schooner Days, not long ago, and for which you are to be congratulated, impressed me as being the most important suggestion ever made respecting what might be termed the facelifting of the Province of Ontario.

You remember advising that the harbors on the north shore of Lake Ontario be made safely accessible to watercraft. Since reading it, I've been envisioning our harbors not only safely accessible to watercraft, but their environments landscaped and beautified with flowering plants and shrubs, with inns convenient to the landings, or wharves, where one could have afternoon tea, or a meal or spend the night. I have used the word, inns, as I prefer it to hotels, since reading a fascinating book on Old Inns of England. Indian names might distinguish our inns. And there would be attractive harbor lights and, of course, lighthouses.

Safely accessible harbors, such as you have suggested, not only would provide accommodation in fair weather and foul, but should attract many tourists to Ontario from outside points.

Why not begin with Bronte, since that harbor requires rejuvenation, having recently lost its lighthouse, and thus make it a model for all our harbors on Lake Ontario?

Reproduced from one of the most popular Christmas cards of 1947. Third in an historic series based upon the old Gooderham and Worts windmill at the foot of Trinity street. 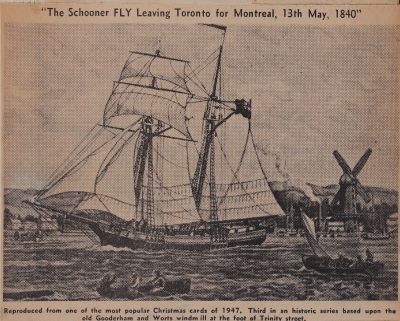