FIFTY YEARS AGO Bronte had lot of sailing fishboats, and no power craft at all. The fleet numbered twenty-two at one time, and that was about top figure. The Bronte fishing fleet survives to this day, but now it is all powerboats and no sail.

The sail fleet in the 1890's formed two groups, the small ones 22-footers, the large ones around 30 feet in length. The biggest was the Alice Roy, 32 feet long. Another, the May Belle, 35 feet long, with a clipper bow, had been begun but she was turned into a yacht. I still admire the way a youngster worked her out of Frenchman's Bay piers against a head sea, forty-four years ago last summer. Poor boy, he lost her at Port Credit soon after, jibing too short to make the harbor entrance in a big sea. She capsized in the breakers and spilled everybody out. They got ashore alive, my admired unknown lad still clinging to the big tiller. Abram Block, J.P., bought the rest of her for $25.

Fishboats were then built in Bronte for $50 for the smallest, 22-footers, and up to $200 for the large 30-footers. Good, clear white oak and white pine then cost $8 to $10 the thousand, and grew within a mile or two of the building shops.

Whether square-sterned or sharp, clipper bowed or plumb stemmed, the real Bronte fishboat always had the rudder outboard. They were open, but decked over forward and from six inches to a foot along the sides, the large open cockpit being surrounded by a low coaming. If the stern was square the cockpit ran aft to the taffrail; if sharp, the coaming was rounded so as to give 18 inches or so of deck aft. The square stern permitted a thwartship roller over which the net was laid out or hauled. The stem involved having the roller on the quarter, at an angle, but as the boat had to ride stern-to for this operation the sharp end allowed her to do so with less pounding and splashing than the square one.

FLEET OF YEARS AGO

The Bronte fishing fleet consisted of the following mackinaw rigged boats about 1898:

ALICE ROY, owned by Wm, Sargent, who earlier had the Thistle and later the Mamie. All these owners sailed their own boats at one time or another. There were no company boats. Many were named after children in the family, now greyheaded men and women.

VERA, John Ingledue, who also had the Maggie.

ITALCA, Wm. Fertile, also Jack Hunter. Stanley D. Baby later found her a very good yacht. She was of unusual model, rather spoon-bowed, with narrow stern and raking keel. The other boats were almost plumb stemmed and their keels were horizontal, with very little projection or deadwood. Italca still survives, we understand, as a power boat on Lake Simcoe.

MAMIE, Sargent's new boat which drowned the two Gillams. William, the son of John, keeps an ice-cream shop opposite the drugstore on the highway in the modernized Bronte.

VOLUNTEER, Wm. Joyce, still living. Named either for the America's Cup yacht or the volunteers of the Northwest rebellion.

BIRDIE, baby of the fleet.

BUG, another small one, owned by Walter Thomas, who also had the Ella, later sailed by Charles Osborne.

"BLACK FANNY," Tom Joyce, who also had the Velveteena. "Black Fanny," was a nickname which may have commemorated a member of the population of Bronte which flourished from the times of the underground railway and the American civil war. She did have a black band around her. She was carried out on an "iceberg" in a spring freshet. which broke up the Twelve Mile Creek, and so far as is known did not stop this side of the Mason and Dixon line. Her right name is said to have been Lenore, but it was forgotten. She was popular as a party boat and often rented for cruises.

GENESTA, James Joyce, named after the English challenger for the America's Cup. Jim Joyce was a good professional yacht sailor, with the Dinah and the Chinook, owned by Malloch of Hamilton. So was Bob and other Joyces.

At this time Bronte was the unsung Gloucester of Ontario, quite as picturesque and romantic as that Massachusetts artists' mecca. It was the hailing port of most fishing boats on the lake, and these were all sailing craft. Up to the end of the century there were no power boats at all. The only power boat was a plump little steam barge called the Chub, with a mast and gaff foresail and a staysail on her stem. She was not a fisherman, but carried fruit and stone and fertilizer or what freight she could get.

The fish boats were all two masted. Those named account for about forty of the "bare poles" which lined the piers on Saturdays at sunset. When the fleet was at its maximum there would be still more masts. The fish boats had so little rigging, standing or running, that their spars looked naked compared with the masts of even the stonehookers or the larger schooners which still plied to Bronte. The numerous stays and shrouds, rattled down with ratlines like ladder rungs, and halliards running to six or eight parts, along with the crosstrees, trestletrees, doublings and spreaders, made the masts of the larger vessels fuzzy as Christmas trees in comparison. Bronte then also had four 'hookers, which would bring the mast forest up by another eight, the Chub's sturdy foremast with its gaff would be nine, and the rare three-master, like the Gulnare, Abbie L. Andrews, or St. Louis, that came in with coal, would give a grand maximum of 60 masts.

Who ever saw that many in Bronte all at one time? Now there are often none—but there is no reason why there should not be sixty again every Saturday evening in summer, for with adequate dredging, cribbing and lighting Bronte would have the same popularity with the yachts of Toronto, Youngstown and Hamilton as Oakville has enjoyed.

THESE snapshots by Rowley W. Murphy, OSA, thirty-six years ago show Bronte harbor towards the end of the sailing era of the fishboats, but are typical of the fleet. The innovation of the "clipper bow," with its curved and raking stem, was copied from the smart little hundred-ton schooners the Dorland brothers had turned out in the 1880's—among them the NEWSBOY, RAPID CITY and MAPLE LEAF. This altered the original straight-stemmed Mackinaw profile, which is preserved in the picture of the THISTLE, above. Simplicity of the Mackinaw rig, with the masts almost bare, is apparent. Even the two halliards on each mast were not made up on pinracks or fife-rails, but simply half-hitched twice around the mast when not in use. The straight-horned spreaders, which gave some macks a catfish look around the nose, can be seen in the THISTLE and a clipper-bowed example astern of her. They, too, were an innovation, supplying the shrouds of the foremast in the narrowed bow with a better lead. The THISTLE, as will be noticed, was sharp and shapely, with a good sheer which made her ride high and dry. 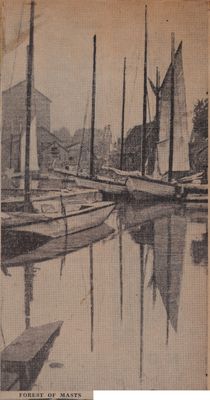