CAT HOLLOW'S famous and nameless Captains' Street, which sent forth forty-two of the village's two hundred and sixty-five inhabitants as master mariners, never turned out a better sample of the schoonerman than Jim Peacock, born there Oct. 22, 1853.

Cat Hollow, as every commercial sailor knows, is the pet name of the cluster of timber piers and wooden houses on either side of Lead Creek, where two Northumberland County townships kiss and part, on the north shore of Lake Ontario, near Presquisle.

"Colborne Harbor," "Cole's Wharf," "Port of Cramaha" and "Lakeport" were four names of it, but when the village to the north, in which was the Keeler family seat, got the post office it took for keeps the name Colborne. "Port of Cramaha" vanished because the name of the noble marquis for whom it was called was too hard to spell. So little Lakeport got all that was left.

It is funny that with all the "ports"and "harbors" in its nomenclature and all the masters, mates and sailors ; among its population, Cat Hollow never was a name on the chart, nor a haven of refuge, nor a harbor where a vessel could lie in comfort. Yet half a dozen schooners were built in its shipyard, and dozens traded there. Its homes bred sailors for all over the lakes.

Little Jimmy Peacock's father, a fisherman, died when he was eight. Five years later Jim was considered old enough—if not big enough, for he was small of stature—to earn his own living. That was in 1866, when the American War was over and the Fenians were raiding Canada and the blissful Reciprocity era had ended but people still believed in work.

Young Jim was lucky to get a "site" as cook for a crew of four, being old Captain James Dougherty, his mate and sometimes two men, sometimes none, in the little centreboard schooner Advance of Colborne, She was about the size of a Toronto ferry tug and could carry 3,000 bushels of grain. This meant an average freight of perhaps $60 a trip, for at the most thirty trips a year. If the Advance ever grossed $2,000 a season she was very lucky, but even that would not pay four men and a boy much for eight months' work, after the running expenses of gear, groceries, tow bills and harbor dues were deducted. Sometimes the Advance could not afford a crew at all, and captain and cook had to take her out alone.

Young Jim made $75 in his first season. He cut ice on the pond and cordwood in the bush for the Grand Trunk locomotives' fireboxes, between finishing up his schooling in the following winter. The work completed making a man of him—for marine purposes—and next year, rubbing bear's grease on his upper lip to make a moustache come, he sought a "man's" berth—and pay—in another schooner. This was the Richmond, of Napanee, 13 tons larger than the Advance, but still small. She paid $20 a month. From her he went to the "barque" Sarah Ann Marsh, square rigged forward and trapped with chains to keep her from coming apart under her heavy loads of lumber.

By the time he was 21 the bear's grease had been so effective that young Jim was the captain of the white maple-bottomed 84-ft. schooner Octavia. She was named for a daughter of Major Joseph Keeler, M.P., of Colborne, the owner. Young Jim did not marry the heiress and go to the Senate, as happens in story books. He did wed his Cat Hollow schoolmate, Margaret Matthews, and took her to Toronto in the Octavia on their honeymoon. She was his "first mate" for a life voyage of sixty-nine years.

"The best I ever had," said Jim, patting her hand, three years ago.

He took her to Port Hope when he brought the Octavia there for rebuilding, and made a home for his bride in the Durham county town. A happy home, a successful departure. He was offered vessel after vessel to sail, each larger than the last. Then frugally bought quarter interests, owners craftily consenting, in order to keep down expenses. Twenty-two years after starting to cook at $10 a month he himself was the owner of the three-master Oliver Mowat. In one season he took 235,000 bushels of barley off the north shore of Ontario. That would be a freight of about $5,000, besides what she would earn in coal and lumber.

NOT SLOTHFUL IN BUSINESS

He knew when to buy and when to sell and made only one loss on any of the seven schooners he owned in whole or in part. This was when the Emily B. Maxwell, his biggest, piled up on newly placed unlighted piling at Cleveland. But he more than made up his loss by selling, when the Great War restored schooner prices. His big Arthur, bought economically, went to Cape Town during the war boom. Captain Jim and his son opened a coal business in Port Hope and supplied their yard with a schooner bought at a bargain at Toledo and sold when worn out for what she had cost them.

No one ever complained of sharp practice or unfair bargaining by Jim Peacock. He paid current wages promptly but saw to it that they were earned. The Mowat's forecastle in 1896 was the cleanest, lightest and airiest on the Great Lakes, and her table the best. All fed alike. He paid a cook $5 a month above scale and silenced grumbling owners by pointing out that her provision bills were $10 less than others. He never owed a man a cent nor refused the needy a dollar.

So a good man has gone to his enduring reward; that sturdy Great Lakes mariner, Captain James Peacock, long "of Port Hope." He was in his 95th year when a third attack of pneumonia ended his days as February came in.

To the last he was a lakesman. In the delirium of his final illness he talked of lakewise affairs; of a schooner battling a gale, and of gear that was adrift and had to be trapped down.

A devoted daughter soothed and quieted him, because she spoke a language that he understood. "Yes, of course, father. Just take it steady, and lie still, like I've told you. I'll see that it's lashed down snug. The stops are holding. You bent them on, yourself, you know. There'll be nothing to it. Just take it steady."

His reward, of ninety-five years?-seventy of them spent on Lake Ontario?

Chiefly, the home, family and host of friends he, Cat Hollow orphan at eight, had won in a world where the weakest goes to the wall, but he who is willing to work has butter on his bread.

He used to joke with his colleagues of the present Port Hope Harbor Board on his first encounter with the board 70 years ago. In 1879, fresh from Cat Hollow, he built a home for his bride in the town and brought an ugly blunt-nosed scow schooner to load lumber there. The board, collecting 15 cents a thousand harbor tolls on the lumber shipped, were keen for customers and had offered a new hat for the captain making three round trips out of Port Hope with lumber in a week.

"Sure, Captain-er-Peacock, ain't you?" was the answer.

He began loading Monday morning, sailed for Oswego, 92 miles away by the shortest wake, and was back and loading again Wednesday morning; back again on Friday for another, and on Sunday completed the third round trip. The harbor office was, of course, closed. Monday morning he asked for the hat and was told, "Well, the board says ye done well but the prize is for Port Hope vessels, and that scow of yours hails from Cat Hollow, don't she?"

"She sails from Port Hope three times in a week," said Jim.

"Yes, yes, Captain; hope to hear that often," said the harbor master, thinking of the tolls.

When the harbor jacked the fee up to 25 cents he went to Whitby to load, though this was thirty miles farther from Oswego. Whitby was sticking to 15 cents. The whole lumber fleet followed him, for he was recognized as a "smart man," willing to sail thirty miles more to save $30 or $40.

Port Hope repented by making him a member of the present Harbor Board. His fellow members were his pallbearers. Captain Peacock's son, "Young Bill," as we in the forecastle, called him in 1896, when he was mate of the Oliver Mowat with his father and we were working out passage was unable to attend the funeral, or take his dutiful place as, pallbearer, for he is very ill. He became a good master mariner, like his father, sailing the Maria Annette fifty years ago, and later the Arthur and last the Julia B. Merrill, and he was a good business partner in their coal yard. Of all his lake faring, perhaps his greatest feat, of which he made nothing, was sailing that Merrill from Port Hope to Toronto, to be burned in a hot-dog holocaust at Sunnyside at a fair price.

This was in 1931, when she had long outlived her second incarnation. She was an Upper Laker which had been brought to Lake Ontario in 1913. After eighteen years carrying coal to the Peacock yard in Port Hope she was completely worn out. Her mizzen mast was gone, her quarters, which once turned up like a duck's tail, drooped till she was humped like a whale's back. The foresail, mainsail, staysail and standing jib was all that was left of her outfit of eleven sails and they were tattered. Yet Capt. Wm. H. Peacock, still "Young Bill" to us, took this rag bag out of Port Hope harbor without the aid or escort of a tug and sailed her up to Toronto in a day's run, finishing in a buster of a squall with her old booms cocking up in the air like hockey stick.

THEY ALL LOVED CAPTAIN JIM

IN the group reverently accompanying Capt. James H. Peacock's remains from the pleasant home he had made on Brown street, Port Hope, to St. John's Church are his pall-bearers, Messrs. A. G. Dawson, fellow coal merchant; James Giffen, colleague on Port Hope Harbor Board; Arthur Peacock, of Hamilton; J. B. Rosevear, Arthur Marks, secretary, and J. B. Holland, Harbor Board members; also Isaac McEvoy, Port Hope, one of Capt. Peacock's old sailors and later himself master of the White Oak; and Charles Ough, Port Hope, long a friend of both. Capt. W. E. Redfern of Colborne and D. L. Matthews were also present, with relatives from Hamilton and Toronto.

Best known and most satisfactory of the seven schooners Capt. Peacock owned, in whole or in part, was this OLIVER MOWAT, which he sailed for seventeen successful years. 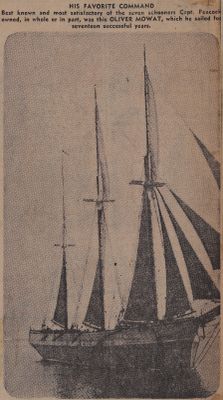 They all loved Captain Jim
Groups of Related Records