PRE-CONFEDERATION Bronte, in Trafalgar township on the north shore of Lake Ontario, was a schooner port, building its own vessels, from freighters to fishboats, and sending them all over the Great Lakes, manned by Bronte crews and mastered by Bronte captains. It was not the home of so many schooners as its rival, Oakville, four miles east, but its vessels were distinctive.

On the first Dominion Day, July 1, 1867 Bronte had 400 inhabitants, most of them sailors and fishermen or their dependents—two hotels, three stores, a blacksmith shop, and a paper mill. It had less of all these when we first saw it, thirty years later, for while Confederation may have built big cities and long railways it did not foster small villages, local industries and self-contained communities.

Bronte has more inhabitants now, for the summer cottage habit has enlarged its boundaries and its population—though the Bronte Paper Mills of 1867 appear to have gone into hardware, fishermen are fewer, sail has vanished, and with it some of Bronte's individuality.

Fuller's Halton and Peel Directory, 1866-67, lists three Bronte captains, John Belyea, M. C. Thompson and Joseph Triller. As a correspondent has kindly pointed out, Joseph Marcus Triller was the one who owned the vanished Bronte House, not Joseph Coates Triller, long and affectionately known as "Uncle Joe." There were other captains then or later, among them Capt. Roberts, the shipowner, Len, Ben, Frank and Walter Dorland, the first two also, shipbuilders, several Capt. Joyces and Capt. William Skelton, who first sailed the Highland Beauty, a lean slim steam yacht that lay on the stocks in Oakville and was finished as a schooner.

Capt. Skelton was one of the many "Bronte Bills," as they were known all over the lakes, who were masters and mates in everything from square-riggers to fishboats. There was Wm. Joyce, still alive,

and Wm. Dixon Pollock, born in Glasgow, 1811, who had the Dove and the Ann Brown

and Wm. Pollock, his son, mate of the Parana, an Upper Lake "barque" sailed by George Pollock, another brother. He also sailed the Duncan City,

and Wm. Churchill, who was blind but a good sailor,

and Wm. Gillam, in the Defiance,

and Wm. Fertile, of the Etelka,

—all sailing out of Bronte.

One season, before 1910, the old Abbie L. Andrews, originally an American three master and then on her last legs and top masts, was manned entirely by these Bronte Bills. If Capt. John Joyce who sailed her, ever called "Hi, Bill!" six or sevent pairs of Bronte lungs would roar from all over the ship "W'ich?"

The old mill, built by Squire Williams and John Belyea in 1858, and still standing, though used as a factory, is the strongest evidence of Bronte's former greatness. Then the piers used to be piled high with lumber and teams lined up as far as the railway station and back to and along the Lake Shore road and the Guelph road to bring grist to the mill and to the three little warehouses or elevators, two on one pier and one on the other. One of these sailed away one day on a scow towed by a tug, and made port at the foot of Frederick street in Toronto, where it found another job as a grain elevator, until it became a crushed stone storehouse in the old corporation yard. Another made a shorter voyage to Hamilton. The third was torn down and the stuff in it was used to build barns.

The old mill was used as a grist mill, and a sawmill, and a paper mill, and now, much changed, altered and enlarged, carries on iron manufacturing and other industries. Its first chimney is said to have been destroyed by lightning, but it still had one of moderate height. The mill was at the old harbor head, and shipyards and boat building shops were around it. A modern shop and plant has been erected on the site and is turning out steel tugs and launches. It began during the war.

BRONTE PORT HAS REFLECTED ITS MILL FOR 90 YEARS 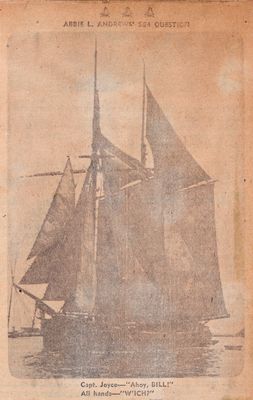