Village Port Famous For Its Mackinaw Fishboats Also Had Its Distinctive Model For Successful Coasters — Its Stonehooker Fleet.

WHEN we first sailed into its harbor Bronte had ceased to ship out grain or anything but fish and stone. Local stone, being soft red shale and sandstone, was not much good except for filling cribs, so the Bronte stonehooker fleet numbering four or five vessels quarried the lake shore easterly where blue limestone provided grand building material.

The stonehooker fleet at that time (1896) consisted of the little steambarge Chub, the sharp schooner Mary Ellis, and the scow Brothers, both Bronte built, the Defiance, an early Niagara packet schooner, and the Minnie of St. Catharines, a small sharp-built fruiter. Truly a motley collection, no two alike. Yet Bronte had, even in the preceding decade, been the building place of a type of stonehooker as distinguished and outstanding as were the twenty-two mackinaw fishboats which lined its piers. The new-model hookers were all owned in Port Credit, Toronto or Whitby.

Like others in the ancient and honorable calling of stonehooking the Bronte men often left their vessels in port, and sculled or poled their heavy decked-scows, with which they gathered their cargoes, miles along the shore in smooth weather, quarrying and loading limestone from the beach or bottom.

These scows, not to be confused with the scow-built schooners which were their mother ships, were themselves large, 20 to 30 feet long, sometimes carrying half a toise, or five tons weight and sometime more. They were often equipped with small hand-winches or derricks to lift blocks of stone weighing as much as 200 lbs. from the lake bed. When the scow was loaded it would be poled or sculled back to the harbor and the stone would be thrown on the hooker's deck. Sometimes a whole day would be spent getting one scowload. Sometimes it took two weeks to load the parent hooker, which might carry up to ten noise, although the Minnie could only float one.

Then the home dwelling hookerman and his boy or "pummy", - they both usually slept at home, not on board - would carry down a basket of provisions, and push off "for market." This would, nine times out of ten, be the stone docks at the foot of West Market street in Toronto, twenty-five miles from Bronte, but as far away as China to the simple mariners.

Quite different was the outlook of those who acquired the new-model hookers for which Bronte was noted in the 1880's, and quite different were the vessels. These men would sail to Kingdom Come for sand, gravel, hardheads, cobbles, pavers, builders or cribstone—wherever they could get it—and they would go still farther for a freight of coal, grain, apples or lumber - even sawdust - if it offered. In later years two of them, the North West and Maple Leaf, used to run summer cruises for YMCA boys and others.

The "brig" Pearless was last and largest "big vessel" built in Bronte and that was in 1853, but thirty years later she was succeeded by some smaller well-modelled centreboard schooners of which Len Dorland was the designer and builder. He may have got ideas from Capt. Jas. Andrew of Oakville, who had built the Parthenon which became the Robert McDonald but the Madeline which Dorland built in 1882, Rapid City of 1884, News Boy of 1885 the rebuilt Maple Leaf, 1886, and the North West, also of the 1880's, all had the same graceful "clipper bow," concave in profile and waterline, and were fast. The smallest (in tonnage, because she was so short) was the Rapid City, 70 feet long, 19 feet beam and only 3 feet 7 inches deep in the hold. She only drew 4 feet of water loaded to capacity and 18 inches light. She sailed well—but not to windward, not even after adding a 4 inch shoe to her keel. She was a centreboarder, and handy for loading stone, brick, apples in barrels, or anything that had to be ferried out to her and lifted her low side. Of the others of this group the North West, 75.6 ft. long, 20 feet beam and 6 ft. depth was the best and the largest. She measured 57 tons.

Their deadweight capacity was about 100 tons. The only hundred ton carriers resembling these Bronte lasses were the Robert McDonald, ex-Parthenon, already mentioned, and the H. M. Ballou, the latter an American bottom from Pultneyville. The Echo, Highland Beauty, and Helen, Toronto schooners of similar carrying capacity, were quite different, as were the Flora, Jessie McDonald, Marcia A. Hall and Snow Bird, which were slightly larger.

Old registers contradict each other over whether the North West was first built by Dorland at Bronte in 1882 or Andrew at Oakville in 1885. She was rebuilt more than once, finally at Midland for a camp cruiser, which changed her name and her rig beyond recognition of the original but preserved some of her handsome lines and sheer.

She may be taken as the best of the Bronte fleet of small schooners, used principally in the stone trade, but occasionally carrying coal, grain, lumber or apples. They were faster than much larger vessels except in very rough-water and could go "wherever there was a heavy dew," as the saying was.

These little Bronte schooners all had long topmasts, large sail plans, foresail and mainsail being of about equal area, like the fishboats. They were usually painted white above with bottoms red, green or leadcolor. Once the North West went green, and in her last days the Rapid City changed to black and red and an auxiliary engine, which took her to the bottom off the Highlands of Scarboro in 1917.

These vessels were rather beamy and carried large loads although shallow in the hold. Their low sides made them easy to load and unload and being broad and stiff they could keep half their cargo on deck, which again facilitated loading. They had sharp flaring bows and easy curves, but when loaded the Rapid City and News Boy used to drag their transoms and steer hard.

The Maple Leaf, best known, did not originate with Dorland, but he helped Capt. Richard Goldring rebuild her after she was burned. She was first built with a spoon bow by Alex LeClair. The 67 ft. News Boy, raised and lengthened in 1900, could then carry 120 tons deadweight. She became a houseboat in Ashbridge's Bay in 1909. The Chub, a small plumb-stemmed steam barge, was about the same size as the schooners. She eventually became a river ferryboat.

Len Dorland was not interested in scow models. The Joyces of Bronte turned out some interesting ones, notably the low sided scow Lithophone. Both builders made many mackinaw fishboats.

"RAPID CITY" in Toronto Harbor, shaliest of the smart Bronte schooners which could sail wherever there was a heavy dew. 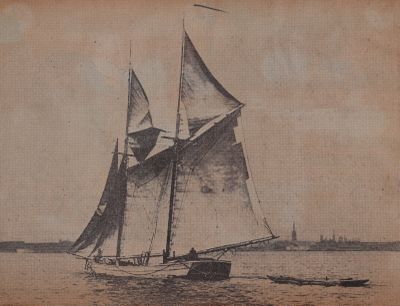