WE have been unable so far to find which was the first vessel built in Bronte but records show the square-ender Rough and Ready as hailing from there in 1851. Naturally there were many plays on her name. To some she was the Rough Unready. To others the Ruffian Ready, and the Ready Rough 'Un, and to others just the Rough.

She was meant for the lumber, tanbark and cordwood trade but like so many little coasters ended her life as a stonehooker. She was not the first vessel built in Bronte, for there are records showing that the Margaret Ann, 21 tons register, a round-built schooner about 50 feet long, had been launched there by 1847. I. Lepper sailed her and J. Lepper owned her in 1856, perhaps son and father alphabetically arranged. The Margaret Ann also became a stonehooker, and was sunk in the Credit River in 1900 after a long, hard life.

This Rough and Ready may have been an importation, a rebuild in Bronte, for a scow of the same unusually straight-forward name and model was built at Sacket's Harbor, at the other end of the lake, in 1840, and rebuilt in Oswego in 1847. Her American tonnage was 28. In the earliest list of small vessels, 1856, she is given 50 tons, which may have been her carrying capacity and would be consistent with 28 tons builder's measurement. J. Hiltz, Bronte, was then her owner. She was engaged in the early cordwood trade to Brown's wharf, Toronto, where the steamboats fueled.

Capt. John Miller, Port Credit lightkeeper for many years, used to tell this story of how the voyage of him who hesitates is lost:

"The old Rough and Ready" he would say, "lay at the piers here loaded with cordwood, one morning in the fall. It was frosty, but the light wind was fair for Toronto, where she was bound. Old Tom Dick or Harry, who was sailing her waited to see what the other boys would do.

"They poled down past him from where they were lying at the bridge, and made sail, so he got his two pummies out to tow the Rough down to the lighthouse on the end. They weren't any too quick about it, and before they got to the pier end a little snow squall shut out from sight the hookers that had already gone out. So he told his boys to bight their lines on the spiles and wait.

"It soon cleared and seeing the rest of the fleet standing on for Toronto, he told them to hoist the foresail. Before they had finished it blew a skift of snow again, and he saw the nearest of the hookers turning around to come back, so he lowered the sail and began towing the Rough back to her old berth.

"By the time he had her moored this last hooker had entered the piers and got a headline out, leaving her sails hanging. One of her boys ran up the dock to the little old house under the cottonwood tree at the harbor mouth. In a jiffy he was clumping back past the Rough, towards his hooker shouting 'Dang it all, dad forgot his store teeth and we've got to lose all this time to get them for him or he can't chaw terbacker!'

"The snow had cleared and they cast off again for Toronto, with a spanking breeze now. The Rough started to get ready again, and again it snowed, harder this time, so she lay where she was. And she lay there till spring, for when it cleared the old man stripped her for the winter. But the other boys made half a dozen trips after they got back from Toronto."

The Rough-and-Ready had a square topsail which, with her scow bow and stern, gave point to Capt. Johnny Williams remark that she was square rigged at both ends.

The scow Brothers, of about the same size, was built in Bronte after the Rough and Ready and lasted over forty years. She was built by the Dorland brothers and owned by Hank Henderson, harbor master of Wellington Square, and his brother, Tom, both captains, and they sold her to the Williams brothers, Joseph, John and Tommy, all captains, too, in turn. She was very fast.

The Dorland brothers, Leonard and Benjamin, are said to have had a serious difference of opinion as to the merits of the scow model. Leonard built nothing but sharp or round-built vessels after 1880, and his models were in demand, both for schooners and fish boats.

The scow schooner May Wylie was the largest scow built in Bronte. We except the sandsucker Commodore Jarvis, a V-bowed steam barge of 1910, for we are speaking of sailing vessels. The May Wiley was 71 ft. 6 length, 17 ft. 2 beam and 6 ft. 3 depth of hold, 61 tons register. Joseph Marcus Triller owned her in 1834, and J. Adamson, Toronto, later. She was sunk off Port Credit.

SHARP STERN AND SQUARE STERNS BROWSING ON THE BANK—An excellent study of Bronte fishboat models in a pencil sketch made by Rowley W. Murphy, OSA, in a lake cruise thirty-eight years ago. 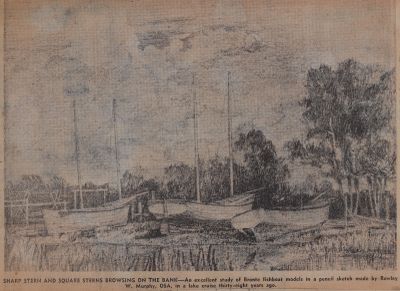