THAT pencil sketch of the two-masted fishing boats browsing on the bank of the Twelve Mile Creek at Bronte aroused pleasant memories among portly commodores and other yachtsmen of earlier vintage. At the time the sketch was made, about 40 years ago, the "mackinaw type" was a favorite with cruising yachtsmen who didn't mind a light capsizable craft if she had other compensating qualities, and some very well finished yachts were built on mackinaw lines. We recall W. J. Commerford's Tainui, early this century, which looked very smart with her deck laid in alternate strips of light and dark wood, brightly varnished. Pretty but dangerous for wet varnish is poor footing.

These mackinaw yachts could go into any of the creek mouths like the Rouge or the Etobicoke and so made good cruisers for campers. Their defects were that, being capsizable, they had to be sailed "on the trigger," that is, with jibsheet and foresheet always in hand to let go. Even with trunk cabins added they only gave sitting-up headroom. The hulls were wide but shoal. A minor complaint about them was that the ripple against their lapstreak or clinker planking made a sound which kept everybody awake at night. One or two were carvel built to avoid this, but the heavier planking required by this smooth fashion made them logy. The lightness of the mackinaw was one of its great recommendations.

The late J. J. McCaffrey, of H.M. Customs, had the biggest mack in Toronto, the Carlotta, painted black with red petticoats and white ribbons, and 40 feet long. The National Yacht Club had six 30-foot mackinaws in its fleet. Four were brought down from Collingwood one summer. The Elk, in the old National fleet, with deer horns on either side of her stem, was Bronte-built. The Herring Gull and the Merry Mac were two other "mackinaw yachts" in Toronto. We have a few yet, principally converted lifeboats used by sea scouts but some built by fishermen from the fishboat's moulds.

Henry W. Barkhausen of Chicago, a painstaking, systematic historian of the Great Lakes, had a replica of a "Collingwood skiff" mackinaw built recently, and has cruised in her with great satisfaction on Lake Michigan. He calls her the Butcher Boy, after one of the last of the lake schooners. Stanley D. Baby of Toronto has had two yachts of mackinaw model. His last, the Nahma, is still giving good service to the Sea Scouts.

The Clarke brothers of Toronto had one and so had Pat Phalen, called the Papoose. She was Bronte-built on fisherman lines and rig, except that she had an overhanging counter, through which the rudder rose.

We have already mentioned the Etelka and the Maybelle, the latter a large clipper-bowed mackinaw yacht, built in Bronte and owned in Toronto.

It is not known now why this type of two masted clinker built sail boat was called a "mackinaw." Indians still use them in the Straits of Mackinac, and eighty years ago Gen. U. S. Grant cruised Lake Superior in one, with a small high cabin over its open cockpit. Nor have we yet been able to find out why Mackinac is pronounced "Mackinaw." Those who do not speak French think the French made the change, but we have never heard Cadillac or Bergerac pronounced Cadillaw or Bergeraw by anyone, nor Sault pronounced Soo, except by those who do not speak French. Perhaps mackinac is one of those words "spelled Cholmondeley and pronounced Colquhoun."

"Mackinaw" applied nautically seems to have been descriptive of the clinker-built centreboard hull and of the rig, two masts, the foremast the taller and right in the eyes of the ship, and fore-and-aft sails, with gaffs and booms. Eighty years ago the Georgian Bay boats had sprit mainsails and tall loose-footed gaff foresails but they soon changed to boom sails.

Some fishboats were sloop rigged, especially on Lake Michigan and in the Straits of Mackinaw.— but not out Bronte way, at least in our time, although we have seen one at Cobourg in our youth. Collingwood for Georgian Bay, Goderich for Lake Huron, Bronte and Presqu'isle for Lake Ontario were the principal mackinaw centres in sailing days. The Presqu'isle boats, some of which were sloops, had a very high sheer, curving clipper stems, and square sterns, but these characteristics were not confined to that end of Lake Ontario. They were found all over. Collingwood favored the double-ended straightstemmed type. Bronte developed squaresterns and sharpsterns, plumb-stems and clipper-bows, as those with a concave profile were called. The original "Baltimore clipper" stem was not concave in profile but slightly convex and raked. Addition of a concave cutwater knee changed the profile. The Bronte clipper bow was distinctive, the stem being raked sharply, almost straight in the upper part and hollowing into a short curve near the waterline, reversing into a quarter-circle below water, where stem and keel met.

Capt. John Spence and Capt. Wm. L. Kennedy, who developed the Fishing Islands in Lake Huron a century ago, may have fixed the type of lake fishboats. Capt. Spence and his partner were Hudson Bay Company ship carpenters before they pioneered Lake Huron. Spence was born in Birsay in the Orkneys the year Waterloo was fought, 1815, and served an apprenticeship in the boat yards in Stromness, where Arctic whalers fitted out and local "yolls," "saxearns," and "skaffies" were built. The two pioneers would know what they wanted to fish with and how to build it. The mackinaw hull certainly resembles the large clinker-built herring boats of North Britain, although their rig is—or was, for they are power boats now—quite different. They had two masts but lug sails.

With flag's flying at half mast, the Lunenburg fishing schooner "Caroline Rose" reached port Sunday, her crew members bearing the tragic details of the loss, at sea of two of their mates, Martin Green, Stonehurst, Lunenburg County, and William Harris, Burgeo, Newfoundland.

The vessel, under command of Capt. Calvin Tanner, was coated with ice from stem to stern, and landed 70,000 pounds of fish at Lunenburg Sea Products.

The story by the skipper of the loss of the two men is another tale of the dangers and hardships experienced by these deep sea fishermen, especially during the winter months.

Captain Tanner said the morning these men were lost, Friday, March 5, was fine and apparently an ideal day for fishing.

The men, along with other dory crews, put out from the vessel to set their trawls. Fish appeared to be plentiful because Green and Harris brought two loads to the vessel and were out for their third trip when a sudden squall and snowstorm from the north-northeast struck, overturning their dory.

They were about 500 yards from the vessel, but the snow was so thick it was impossible to see exactly what happened.

The message of the loss of the men was relayed ashore by Capt. Bernard Tanner of the schooner Fairmorse, as the Marconi radio set of the "Caroline Rose" was out of order.

Capt. Calvin Tanner is one of Lunenburg's most successful skippers, and in his long experience of sailing a vessel he never lost a man until this trip.

Martin Green had been sailing with him for the past eight years and William Harris for four years. Other members of the crew have been with him for long periods, the longest being Bennet Whynacht, who has 15 years on the same vessel.

That very good picture of the Rapid City recently was by Mr. Norman F. Brown, thirty-seven years, ago. one of the "old brigade" of local amateurs who did such good work Saturday afternoons from the vantage ground of the old timber piers of the Eastern Gap in the days of "Rattlesnake Pete" (A. H. D. Freemantle). Mr. Brown, still keenly interested in photography, and modern to the minute, has some charming entries in the forthcoming exhibition of kodachromes at the Royal Ontario Museum.

Monday, March 22nd. would be the 91st birthday of Capt. John Williams, one of the best friends of Schooner Days and of British war victims. A pleasant reminder appears among today's contributions to the British War Victims' Fund, which is still assisting suffering Britons—especially the little ones—by monthly parcels of food and comforts. "Highland Beauty in memory of Speedwell" sends another $10 to join the many. Captain John sent to the fund since it began eight years ago. Speedwell was the name of Capt. Williams' favorite schooner, Highland Beauty the name of another owned by his brother. Without betraying a secret, it does no harm to say that the latter name has also covered the identity of a generous supporter who has sent as many contributions as Capt. Williams in his lifetime and, now that he is gone, sends more for his birthday. Speed well the Speedwell's remembrance.

This is the NAHMA, mackinaw rig and model, by Watts of Collingwood, until recently Mr. Stanley D. Baby's yacht, in the National Yacht Club, and still giving good service as a training ship for the Toc H Sea Scouts. Addition of a cabin trunk made such yachts more comfortable for more than a day sailing, and some, like the TAINUI were equipped with removable cabin tops and had bright-finished decks in strips of wood of contrasting colors.

This carefully drawn, strongly painted oil by Rowley W. Murphy, in the current OSA exhibition, lends point to the Lunenburg story of the loss of two men in the first frozen baiting trip of this March, mentioned in Passing Hails (right). The schooner Mr. Murphy painted in drydock at Gloucester, Mass., is a modern knockabout on the Bluenose model, converted to dragger work or beam trawling. In this case yachts set style for fish boats. Bluenose was designed by a yachtsman, W. J. Roue, naval architect, and while the Gloucesterman is not a replica of her, she does show the influence of Roue and his American rivals, Starling Burgess and John Alden. 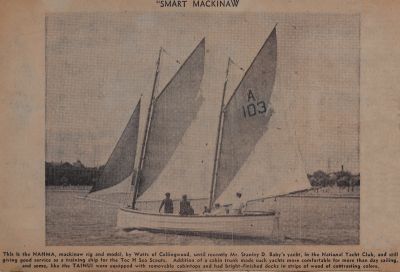