SEVEN schooners was perhaps the largest number owned in Bronte in its heyday and at any one time, but more than that were built there or came and went in the 19th century. The late J. J. O'Connor, district magistrate of Thunder Bay, spoke with enthusiasm of a little Bronte vessel whose smart appearance got the lake water into his blood for life when he was a boy. He saw her in Frenchman's Bay. "It was her first trip in the spring," he said, "and she was newly painted and was bright with new sails and gear. She sat the water like a duck, with a high quick sheer and graceful curve to her stem and quarters, though she was really flat bottomed. She was black with a white stripe, and bright red below. Across her stern which was brightly painted in contrasting colors, ran the legend "LORD NELSON OF BRONTE," and she certainly was a credit to the hero who gave both her and her home port and township their names. At the time of which Magistrate spoke men were still alive who had seen Nelson and had thrilled to the great news of the Battle of Trafalgar and its tragic climax. The British national heroes and their greatest battles, Nelson and Trafalgar, Wellington and Waterloo were nearer to us then in time and remembrance than the Fenian Raid or even the Northwest Rebellion now.

The dukedom of Bronte or Bronti was one of the souvenirs Nelson received of his Mediterranean adventures from the sovereigns of the Two Sicilies, when Sir William Hamilton was ambassador at the Italian court and Lady Hamilton the confidante of the Neapolitan queen. Old-timers still call the name of the Trafalgar township port "Brontye," indicating that originally the "i" ending was used in spelling its name.

The little Lord Nelson, which so charmed Magistrate O'Connor's boyish fancy, was wrecked in a curious way soon afterwards at now vanished Port Granby. When casting off from the wharf there a flaw of wind caught her aback and drove her on to the stony beach where she broke up.

In 1853 in Bronte was built the larger schooner Emblem which became the Olivia, 122 tons. The Olivia's timbers yet lie in the marsh at Picton, where she was dismantled fifty years ago. She had a lurid career. As the new built Emblem, sailed by Capt. Belyea of Bronte, and probably on her maiden voyage, she picked up survivors of the holocaust when the steamer Ocean Wave lighted the eastern prong of Prince Edward county at midnight of April 30th, 1853. The Wave had called at Point Traverse wood dock to fuel, on her voyage between Toronto and Ogdensburg, and caught fire when two miles out in the lake. The dead from her were so many that barns were torn down to make rough-boxes for their remains. The Ocean Wave was the first of three steamers to be burned that year in as many months—others being the Peerless and the Queen of the West, both new. The cordwood fuel for these paddlewheel steamers made them poor fire risks.

Two years later the Emblem herself was run down by the new Great Western steamer America, on her second trip from Toronto, and five of her crew were drowned. That may have been all on board. The event is noted in a letter by the late Wm. Davies, Toronto provision merchant, in July, 1855.

After this the schooner was raised and rebuilt and renamed Olivia, possibly after Olivia Hicks, a Prince Edward County lady. The vessel was then owned in Brighton. As the Olivia her name is associated with the tragedy of Moses Dulmage, a young sailor from the Julia, who went adrift after visiting the Olivia at anchor off Point Traverse, and blew across the lake in a freezing gale on Hallowe'en 1878. He was found frozen in the Julia's yawlboat at Stony Point, N.Y.

Probably because of her name we have always imagined the Olivia to have been a dark green schooner--olive green in fact, loading very deep, with short topmasts and a clipper bow. Perhaps wrong in all particulars, for T. W. Rose, of South Marysburg, remembers that she was painted white. There was "Emblem of Napanee" showing up under the fading paint on the Olivia's stern-board when he skated around her in Picton harbor as a boy. Lake sailors invariably pronounced this vessel's name "O Leave Yuh."

Another early schooner built in Bronte was the Owen Sound, 57 tons, by Capt. Wm. Miller—quite early, for she underwent "large repairs" in 1855. She was the same size as the later North West. The little Mary Ellis of about 25 tons, was also built in Bronte in 1855, but 1853 seems to have been the biggest building year in the new port, for besides the Olivia or Emblem in that year was built as well the "brig" Peerless, Bronte shipwrights' crowning effort.

Other larger sailing vessels trading to Bronte up into this century were the Mary Ann Lydon, of Port Hope, and Gulnare, of St. Catharines, the latter sailed by Capt. Wm. Skelton, of Bronte. They were considerably larger than the Peerless.

"Big vessels, as distinguished from stonehookers, occasionally traded to Bronte to load lumber, shingles, staves, grain, flour, or apples. In the earlier days they brought in drygoods, farm implements and railroad iron. Later they brought coal, but not in great quantity; nor were the large vessels calling ever numerous.

Among the stonehookers built in Bronte was one of particular note, a scow nicknamed "The Preacher." She was christened Joseph Wild, in honor of Rev. Dr. Joseph Wild, the potent Anglo-Israelist with the hair and beard of an Old Testament prophet whose sermons rocked Methodist churches in Hamilton, Albert College in Belleville, and Bond Street Congregational Church in Toronto in the 1880's. The stonehooker trade was not a particularly pious one, although followed by some good Christians, but Dr. Wild's eloquence impressed Bronte so much that the vessel was launched under his name.

But we are speaking now of the larger general traders built or owned in the port, and not of the stonehookers, which were a "race apart," being smaller and often square ended or scow built. Among the bigger schooners trading to Bronte, even as late as 1910, were some of "full canal-size" that is, fitting the locks of the second Welland Canal. Such were the St. Louis and the Abbie L. Andrews, the latter sailed by a Bronte captain, John Joyce, and a crew of "Bronte Bills."

COSTLY CARGO FOR SOMEONE

The St. Louis is said to have Drought in the largest cargo ever entered in the port of Bronte, 650 tons of coal, in May, 1909. Her master, Capt. George Williamson, was not a Bronte man nor was she Bronte owned, being the property of Sylvester Brothers, Toronto. To get that 650 tons of coal into Bronte on one bottom was a feat worthy of Sir Francis Drake or Count Luckner. There was only 10 feet of water in the narrow channel at the time, and Capt. Williamson had to load his vessel to 10 feet and no more, and approach in calm weather, with no sea running.

There was no tug available to help him when he got there, and if there had been the $300 freight would not have paid the tug bill. And besides he was a sick man.

He got the coal aboard in Oswego and sailed up the lake 150 miles and anchored off Bronte to wait for suitable entering conditions. The wind went to the eastward, and he was threatened with the lee shore of Burlington, and the hazard of two swing bridges and two tug bills, if he tried for shelter in Burlington Bay. So he beat down to the lee of the western sandbar of Toronto Island and anchored there in "free" shelter where no tug was needed for entering or leaving. But the wind switched to the westward and blew a May gale, with sleet and snow. The St. Louis dragged till she struck the beach. She had to be scuttled to keep from pounding, and ran up her ensign half mast and union down as a signal of distress They expected her to break up.

The lifeboat had been burned the night before. Frank Ward and his brothers took off the St. Louis' crew in three trips with a fishboat. The schooner survived the pounding, and when the gale subsided some of the coal was pumped out of her and she was tugged off the beach. It cost $1,000 to free her.

Again she sailed for Bronte, found a smooth day and got in by heaving herself up the creek by her donkey engine and the help of the fishermen, the wet coal came out of her slowly, and filled every shed, box, barrel and washtub that could be dragged to the wharf.

That record cargo meant a month's work for the schooner, and a total expense of $1,500 for the $300 freight. Capt. Williamson got better from this illness, but died soon afterwards. 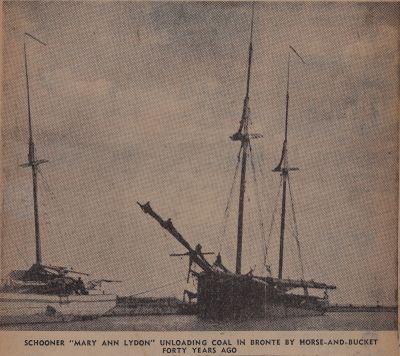