PEERLESS, crowning effort of Bronte shipwrights and pride of Trafalgar Township when she was launched into the Twelve Mile Creek ninety-five years ago, was called a brig and a schooner indifferently in the old shipping records. She was really a hybrid, a brigantine crossing three square yards on the foremast, but she had a fore-and-aft foresail as well, like a schooner. She was painted green and considered a very fine vessel. She measured 262 tons register, which would give her a carrying capacity of 500 tons deadweight or 14,000 bushels of grain. She is not to be confused with the steamer Peerless, whose burning has been mentioned.

The Peerless was built in Bronte in 1853 by Melancthon Simpson for Thomas C. Chisholm of Oakville. John Belyea, her first captain, who had been, we assume, the captain of the Emblem, unless the latter was drowned, had shares in her. This Capt. Belyea was the eldest of seven sons, and built the red brick mill in Bronte in 1858, still standing. His son John was also a captain, and was drowned with the Magellan, as will be told later.

By 1862 Capt. Frank Jackman and Capt. Robt. Coote became owners of the Peerless, selling her in 1864 to John Proctor of Hamilton, who transferred all his interest to Capt. Owen Roberts. He rebuilt her at Oakville and sold her in 1873 to Hugo and Edward Rathbun, lumber merchants, Deseronto. Capt. Alex. Cuthbert, of Cobourg, the fast yacht builder, bought her in 1875. She had her back broken in the iron ore trade.

The Palmateer brothers, Ephraim, Albert and Nelson, venturing into Lake Erie from Prince Edward County in their little scow schooner Flying Scud, looked upon the Peerless with awe when they encountered her in the Welland Canal. With her yards across her mast she towered above them like a cathedral spire. She had come down Lake Erie in nineteen hours under her square foresail alone, in a gale of wind; smart time for a run of over 200 miles, They saw her again when she was "getting on" and eighteen years old. The late Capt. Nelson Palmateer told this story of her some time before his death in Picton a few years ago.

CHANCE TO SAIL IN HER

"Early in the fall of 1871 father sold the Flying Scud and she was laid up, so we boys turned to for the remainder of the season to help on the farm at Point Traverse.

"We had not been home for many days before I saw a fine-looking brigantine steering up the lake from Kingston. She had a clipper bow and was painted green with a lead color bottom. When she neared Point Traverse she rounded to, clewing up her headsails and running her jibs down, and anchored. The yawlboat was dropped from the stern davits, and the captain was sculled ashore, landing on the beach opposite our house.

" 'Are there any sailors around here?' he asked.

" 'Sure, here are two just home a few days ago,' answered my brother Albert.

" 'Well, I'm shorthanded, and bound for Oswego, and if you'll ship for the run over I'll pay you good wages and your fare home."

"What's your vessel?" we asked, although we recognized her as the fine lady we had seen in the canal the year before.

" 'All right,' Albert and I agreed—Ephraim wasn't there at the time—and we packed our bags and put off in the yawlboat.

"Several other vessels were lying to an anchor, for the wind wasn't fair for Oswego, and as we passed them, on the way out to the Peerless, more than one captain advised our new skipper to wait for a shift, but he was in a hurry to get on with his voyage.

" 'Now my boy,' he told me, 'I don't want you to take risks aloft, but your special job is to look after the main gafftopsail.'

"I had plenty of experience already with work aloft in the Flying Scud's crosstrees, so I thought this would be easy, but I found, soon after we got under way, that I had to take my place with the rest of them everywhere aloft, and the first call was out on the foretopsail yard, reefing the foretopsail when it freshened. She was square rigged forward, with a double raffee above the foretopsail.

"She was lumber loaded, and she lay down in a puff until she shifted the deckload of lumber two feet to leeward, and she was over on her side with only the lumber bearing her up and keeping her from capsizing. We managed to wear her around and bring the wind on the other side, which straightened her up until she leaned to windward. The captain asked me if I knew the anchorages under the Main Ducks, and I told him I could take him in there, about twelve miles away, so off we steered for that shelter, repiling the deckload as we went. By the time we had run as far as the Main Ducks the wind had shifted, and we stood back again for Point Traverse, and anchored where we had started from. Of course, we got the laugh from the other vessels that had laid snug all the time.

"However, we got to Oswego eventually, and Albert and I asked for our wages and fares home.

" 'Not on your life," said the captain. 'I'm going to Charlotte for a load of pig iron for Toronto now, and if you quit the vessel you'll not get a cent from me.'

"There we were, Canadians in a foreign port, and we had to make the best of it. So we sailed in the Peerless to Charlotte, where the old blast furnaces used to stand, on the west bank of the Genesee river, and there the pig iron was dumped into her like grain pouring out of a chute.

"Before we had lost sight of Charlotte lighthouse the Peerless began to leak, and within an hour the water stood at 15 inches in the pump well. The pig iron being dumped in any old way had strained her. All hands turned to, some at the pumps and some in the hold, retrimming the pigs, and getting at the leak. We managed to reach Toronto, and here Alex. Cuthbert, of Cobourg, took a hand in our affairs. This was the. Captain Cuthbert who designed and built the Countess of Dufferin, America's Cup challenger, and many, other yachts. He was a vessel man as well as a yacht builder, and he owned the Peerless, or had a share in her then and bought her outright later. He came up by train to Toronto, fired the captain, and engaged my brother, Albert, who was the only man on board with papers, to take charge of the brig.

"It was very late in the season by now, but Captain Cuthbert had a charter for the Peerless to load barley for Oswego, and we took in 13,000 bushels in Toronto and cleared. No sooner were we out than it came on to blow heavy from the eastward, and we had to turn back and run for shelter in under Gibraltar Point.

"Next day we got away again, and got down the lake as far as Cobourg, when it came on to blow hard again, and we lost most of our sails. Albert put into Cobourg for shelter, but she was almost unmanageable, and at this time Cobourg was a hard harbor to enter, with an ugly wooden T-wharf cutting it in two. The Peerless hit the tongue coming in, and was a pretty bedraggled looking hooker by the time we had our lines out.

"That was as far as we got towards Oswego. Captain Cuthbert decided to lay her up for the season, and we unloaded our barley into Captain Geordie Williamson's schooner Star and went home to Point Traverse. The Peerless was refitted and sailed for years afterwards. I made voyages in her later when she was commanded by Captain Jim Savage."

The Peerless came to grief under Capt. Savage at Wicked Point, Prince Edward County, in the 1880's, and left her bones there. No one was drowned.

MATTHEW KNAPP of Sacket's Harbor, N.Y., submits this to Schooner Days for identification. The photograph was given to him as one of the MAPLE LEAF, rebuilt in Bronte. He questions it, for he himself bought that vessel when she was seized by the U.S. Customs, and used her as the yacht BANSHEE. The vessel could be Maple Leaf or any of three Bronte-built sisters, MADELINE, NORTHWEST or NEWSBOY. We are inclined to think the photograph is of the ECHO of Toronto, built at Port Nelson very long ago and buried under the new harbor fill at the foot of Brock street, Toronto, in 1920. She traded out of the Bay of Quinte for many years in cedar post and bunchwood trade to south shore ports like Bear Creek, Pultneyville, Fairhaven and Sackett's Harbor. Early owners were the McSherry family of Toronto. From the shape of the transom and the shortness of the name on the topgallant rail on the quarter our guess would be that this is the Echo, but we would be glad of both confirmation or correction. 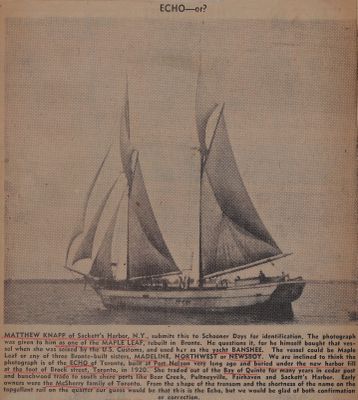