THE SAP was rising fast in the new Canadian maple tree when Michael Kelly brought his two strong young hands to Kingston, Canada West, all eager for hard work, no matter how many r's or hours it took. Michael was born "on St. Patrick's Day in the morning, in 1831 in County Fermanagh, near Enniskillen, and four miles from Belleek, where they do be making the fine chinaware." So he was sixteen. With his father and mother and elder brother Hugh he had left Ireland; in the black years of the potato famine and crossed the Atlantic in a sailing vessel. The others came on through to Toronto, but Michael got work at Kingston on the way west and stuck to it.

The Mackenzie Rebellion was ten years dead. The reforms it had brought were working creakily and Upper Canada was emerging to the macadamized stratum of civilization. No railways yet, and all outside plumbing. Freight went by wagon, sleigh or schooner. For eight months in the year Lake Ontario was the best highway; sometimes for twelve. Michael plied his calling on that highway for fifty years, in fair weather and foul. He was the master of eleven schooners in his time, every one with a story.

Michael Kelly came to Kingston in 1847, and sailed in the schooner H. P. Ryan of that port for one season. He was hired as cook, and the crew of six, God help them, had to thole what he did not know until he had learned better. Used to burning meat in the open hearth at home, the first time he tried to make a fire in the galley stove he laid it in the oven and wondered why it did nothing but smoulder and smoke till he was driven out on deck, black as a heathen savage, to face the blacker rage of hungry shipmates.

When winter ended sailing for the year he worked for a farmer at Hatter's Bay, which became Portsmouth, hauling sand and stone for the new penitentiary then building. After that, in the schooner W. H. Boland, he came to Toronto, a gracious little city of 21,050 inhabitants, getting their drinking water from backyard wells or the pellucid harbor, then crystal clear.

Brother Hugh had come down to Kingston for him. Toronto was his home port ever after. Michael lived in a house behind St. Mary's Church at the corner of Tecumseh street and Defoe or Little Adelaide street, as once known. The Kellys have long been among the faithful of St. Mary's parish.

For the first four years our hero sailed out of Toronto in the small schooner Defiance, built at the mouth of the Etobicoke in 1845. She got her name because "Boss" Harris, otherwise James, master builder alike of barns and bumboats, defied the riparian claims of the farmers on the lake shore and built her from timber cut on the bank in the natural harbor of what was then a navigable river, the same old Etobicoke which floods out the dwellers in its flats to this day.

She was the last of the Niagara sailing packets, carrying passengers and freight between Toronto and Niagara, two trips a week, when Robert Maitland of the Church street wharf, and Capt. Rob't. Moodie owned her. She was a standing keeler, adding a centreboard later, and had a square topsail on the foremast. A Toronto or Port Credit man named Boyd owned her when young Capt. Kelly became the master of her. She descended from package freight to tanbark and cordwood, and from that to stone. We well remember her coming into Toronto on the 5th of January, 1898 with a cargo of blue lake shore limestone; and she defied the ravages of time and of stonehooking until 1917. Then she shook herself to pieces and laid her fragments at the feet of the highlands of Scarboro. She was a full bowed high bulwarked old craft, with a square stern, well overhung, and heavy drooping quarters. Her masts raked, that is slanted astern, like a picaroon's, and she had a thick wide raking stem. No beauty, but a fast sailer on certain courses. Usually white, in our time, with red or slate color bottom, but in Michael's she may have been black.

"FASTEST SHIP IN THE WORLD"

From the little Defiance Capt. Kelly rose to the larger Reliance, owned by Gooderham and Worts, and by 1859 he was master of the still larger schooner Marco Polo for the same firm. This one was named after that Marco Polo—New Brunswick built—which was actually the "fastest ship in the world," steam or sail, in the 1850s. She went from Liverpool to Australia in the unprecedented time of 68 days, beating steamers by a week. The Toronto Marco Polo, built at Oakville by Melancthon Simpson, had the reputation of being "the fastest vessel by the wind that ever sailed Lake Huron." She was afterwards owned in Southampton.

"PLACE OF THE BLACK ALDER"

Sir,—Having noticed the Etobicoke River again in the spotlight, I recalled that its name is Indian, meaning Place of the Black Alder. Checked with the Rev. Peter Jones' list of Indian names, Etobicoke is given as the English spelling, pronounced by Indians, A-doo-pe-kog, which, of course, is the correct form, just as Ma-se-sau-gee, cited by him as the Indian pronunciation of Massasauga, is the correct spelling of this placename. The Smithsonian Institution at Washington, in its handbook of American Indians, selected Ma-se-sau-gee from more than eighty spellings of the word, as the correct one. I have cited Ma-se-sau-gee to substantiate Peter Jones' record of A-doo-pe-kog.

As for "Toby Cook" in place of Etobicoke on old maps and records, also "Tomis Canning" instead of Temiscamingue, it would seem that now and then land-surveyors were deficient in knowledge of Indian and French orthography or, perhaps were influenced to attempt to Anglicize certain words by advice from headquarters, which was to give preference to names other than Indian and French.

TORONTO WATERFRONT AS MICHAEL KELLY FOUND IT, and the LITTLE "DEFIANCE" OF WHICH HE WAS THE BOY CAPTAIN

The waterfront picture is from the well-known lithograph, "Toronto, Canada West, From the Top of the Jail, drawn from nature by E. Whiteford," in the John Ross Robertson Collection in the Toronto Public Library. Dr. Sigmund Samuel has also a fine copy in his Canadiana collection. The lithograph shows the Toronto of 1854, when young Capt. Kelly was master of the Gooderham and Worts schooner Reliance. The vessels include the steamers Arabian and Peerless, and several square riggers, among them two brigantines. These are in keeping with the time, in Toronto, although the foreground schooner, first mentioned, looks more like a maritime coaster than a laker. The lithographers, Endicott and Co., were a New York firm. 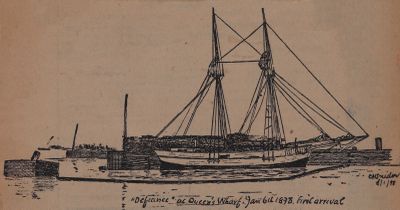