Publication
Toronto Telegram (Toronto, ON), 1 May 1948

BOY, sailor, mate and master in the schooner Dundee in the thirty years she was in the Kelly family, "Young Eddie" Kelly, who celebrated his 80th birthday this week, was, like the winds of heaven, the driving force for this well known Toronto three-master.

The picture of her which he himself drew occupies a prominent position in the birthday decorations of his home, 599 Wellington street west, which he has occupied for forty-five years. Among vessels the Dundee was his first and last love, though he sailed in many. He was in the Dundee when she brought in the first cargo of soft slack coal screenings for Toronto. It heated in her hold till it burned the soles off the boots of the coal heavers loading it into the hoisting buckets.

We have a deal more to tell both about the Dundee herself, and about Capt. Michael Kelly, who brought her into the family, but while this important 80th birthday is still fresh in mind we shall first have a little more about Michael's son, "Young Eddie" or "Knucker," as Patrick Joseph Kelly, the one to be felicitated, was also called.

It was inevitable, with father and uncle both lake captains, that he would go sailing as soon as he could climb over a schooner's rail. Thus he quickly qualified as mate for inland waters. He was too useful, in fact too necessary, to his father and uncle, to take a command of his own. For years he sailed with them as mate and acting master, handling both the ship and the ship's business, and by the time they no longer needed him Othello's occupation was gone indeed, for sail was vanishing from the Great Lakes.

GOOD MATE WITH MANY

"Knucker" Kelly was also mate with Capt. Sam Malcolmson in the Singapore, and Capt. Andy Beard in the Greenwood, and in several other fore-and-afters, but his real love and devotion was to the family three-master Dundee. She was his father's eleventh and last command, the "barque" he bought after sailing ten other schooners for other owners, some of whom let him have shares. But the Dundee was all his own. Five thousand dollars she cost him and his brother Hugh and $3,000 they spent on her after they got her, for she was far from a new vessel. When Michael had to relinquish command, "Your Eddie" took over, with Uncle Hugh, who had captain's papers, being able to sign the clearances and necessary documents.

YOUTH WILL BE SERVED

Uncle Hugh was a careful man and more at home knocking sparks out of iron on the anvil in his blacksmith's shop than driving the Dundee through the billows of Lake Ontario. That year that Capt. Michael gave up sailing Hughie was all for laying the vessel up early and avoiding the autumn gales. But Paddy Burns was short by several hundred tons on his deliveries of waterworks coal, and when the Dundee had delivered the last load under her contract he pleaded for just one more trip, 500 tons more coal, at 50 cents a ton, double the regular rate. It was well on in November, and the weather unpromising, but "Young Eddie" argued they might as well attempt the trip, no matter how long it took, for they wouldn't be doing anything else until spring anyway. Uncle Hugh demurred, but finally consented to make the run to Oswego on condition that the topsails should not be set, and if the weather went bad, they should run back to Toronto and lay up for the winter.

It so happened that they had a fresh breeze and smooth water all the way to Oswego and the Dundee made the run with no need of her topsails, on one long November night, and was loaded by evening of the next day. The wind had fallen light by that time, and Hughie was all for waiting till morning to see what the weather was going to do. "Knucker" knew what it would do. There would be a mild spell, a "pet" day, followed by rain or snow, and a gale from the west in due course. That is a pretty regular sequence on Lake Ontario in the fall.

He persuaded Hughie to make a try for Charlotte at least, sixty miles up the shore, with the chance of putting into Fairhaven, or Great Sodus, or running back to Oswego if necessary. So they started.

His uncle insisted on taking the "watch out," the four hours before midnight, to see that there was no monkey business about those topsails. When he turned her over to "Knucker" she she was toddling along in the bright moonlight with a little air off the land bringing her up on Sodus light, which was still well ahead.

"Better let her go in there," said Hughie. "Call me when we get up with the light. I'm going to turn in for an hour."

"Knucker" nodded and winked at the men of the watch. Before they too turned in for their watch below he got them to set the topsails quietly. Hughie heard the creaking of the blocks and came out on deck in his carpet slippers.

"Knucker," rumbled he, "what are those topsails doing aloft?"

"Oh, I'm just trhying to get her up to Sodus before the moon goes down."

"Well, clew them up, and call me like I told you when you're up with the light. I'll take her in.

"Clew up your gaff topsails, boys," called out Knucker, and Hughie turned back to his state room.

The boys sang out lustily as they, manned the topsail clewlines, but by Knucker's orders they did not touch the halliards, and as soon as the mizzen gafftopsail was clewed up. they sheeted the fore home again, and then the main and then the mizzen. Hughie, lulled by the continued creaking of the blocks, went to sleep, and slept until he heard the sound of the breakfast bell. He didn't come out on deck until after breakfast, but when he did he was wroth.

"Well," said Knucker, "it's too late to go into Sodus now, and we're past Charlotte, so hadn't we better so on to Toronto?"

"Get those gafftopsails off and keep them off!" Hughie replied.

"Then it'll be long after dark when we get to Toronto and the tug won't see us and we'll be caught in any dirty weather that comes along," Knueker argued.

Hughie grumblingly assented, and the Dundee reached the waterworks with her sails dry and enough daylight left to strip them and stow them for the winter in the cabin. That night it rained and snowed and the wind shifted and blew a gagger from the west. It held in that quarter for two weeks. But Paddy Burns had his needed 500 tons of coal for his contract and the Dundee had $250 cash for two days which would have yielded nothing at all had she laid at the dock idle.

Another time, when the Rogers company was clamoring for coal and there was no wind to bring any of the vessels up from Oswego, "Knucker" wired that he could get the Dundee up with 500 tons within 24 hours if they would pay the tow-bill. They agreed and he got the tug Charlie Ferris to tow the vessel all the way in the flat calm, which persisted for a week. The company settled with the tug for $100 and gave him a bonus on his regular freight. It was days before the others got up.

Young Eddie had many adventures in the Dundee, all amusing. There was the famous duel with the W. Y. Emery, a two-masted schooner sailed by "Wild Alex" Ure. Capt. Ure was a good Scotch ship carpenter, of reckless courage when it came to forcing his vessel to make time, and most resourceful in the fancy sails and contrivances to get an extra mile an hour out of her.

On this occasion the Dundee, Clara Youell, W. Y. Emery, Van Straubenzee, Rutherford and Keewatin were all windbound in Oswego loaded for Rogers, Congers or the Ontario Coal Co. in Toronto, and never a breath of wind to get then there. Uncle Hugh had decreed that there would be no wind till morning and sent everybody to his bunk early for an early start.

At midnight there was a tapping on Eddie's cabin door and Capt. Walt Colwell, of the Youell, whispered, "Are you awake, Eddie? There's a nice little air stirring from the southward, and the boys are getting under weigh! I wouldn't like to see Wild Alex beat you to the dock in Toronto, for there's only room for one of you at the Ontario Co's hoist and you'd lose a day or more waiting for him to unload."

Eddie turned out quietly, got his crew out of the forecastle, and cast off the lines. One tug could take them all out, with the wind and current helping, and when Hughie came on deck, with the sound of sailmaking, the Dundee was in the middle of the fleet and a mile outside the piers.

All next day the wind held light off the south shore. The Emery, sporting fly-by-nights, jib-o-jibs and watersails, crept along close to the land, with the Dundee sometimes becalmed farther outside, sometimes forging ahead again, and the rest of the fleet in company.

What wind there was fell at night and it was next day before they floated into Toronto.

The vessels for Rogers and Congers had taken the harbor tug and towed in, leaving the Dundee and the Emery to fight it out for first place at the Ontario Co.'s unloading rig on the west side of Church street slip. The other wharves were filled and the Clara Youell had anchored out off Conger's dock. Carrying every stitch to the last minute, Eddie drove the Dundee past her, touching her lightly as he cut the corner. He got a line on the wharf, but overshot the mooring place before he could check her. While the Dundee was being hove back to her berth the Emery with the help of a tug got a line on the dock too, and "Wild Alex" claimed the position. A jury of all the schooner captains in port sat on the case, and the Dundee, was adjudged the winner. The decision saved two days' wages, which would have been lost if she had had to wait while the Emery unloaded. Walt Colwell gave the casting vote, to prove there was no hard feeling over the Youell being bumped. And "Wild Alex" took the decision like a man.

His 80th birthday finds EDWARD JOSEPH KELLY smiling before his three-masted sweetheart of fifty years ago.

"THERE'S ONLY ROOM FOR ONE"

This was the old Toronto Electric Co.'s coal hoist at the foot of Scott street, photographed by Rowley Murphy, O.S.A., forty years ago. It was typical of the unloading "rigs" of the time, where only one vessel could be unloaded by the steam-hoist bucket. The next arrival had to wait idle with expenses running up. 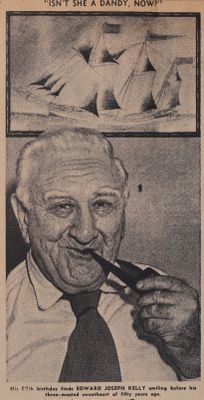