UP with the sun on a bright May morning, on the pointedest point of Long Point, the extreme easterly tip, in the middle (one of the middles, anyway) of Lake Erie, Port Dover, Ont., 20 miles north, Erie, Pa., 30 miles south, Buffalo, N.Y., 60 miles east, is the 3-point bearing.

The four annular lenses in the lantern of the 102-foot lighthouse ceased to float around the tiny incandescent mantle that made a mellow moon of the lighthouse top. Flashes that had walked the sky all night for 20 miles, east, west, north and south ceased. The lightkeeper, who had got up at 2 a.m. to rewind the clock that made the flash—it runs down every six hours—shut up his show to save himself more winding, and went back to finish his sleep, allowing the sun and silence to take over where silence and night had ended.

Long Point juts off from the Norfolk County shore, running southeasterly into Lake Erie for more than 20 miles. It is an unending series of short parallel sandbars, working eastward at the rate of a mile a century which have coalesced at their southwesterly ends under the pounding Erie waves, and now form a battle-hacked finger 20 miles long, pointed at Buffalo at the foot of the lake. Many of the northeasterly ends are separated by ponds and swamps or split into islands, such as Ryerse, or Squires Pond, Nigger Pond, Courtright and so on. About midway the finger has a badly smashed and swollen knuckle, made up of bars, islands, ponds and cuts and accessible only by boat. Here chrome plated nimrods enjoy the hardships of club life, bass fishing, duck hunting and deer stalking in season.

The deer are increasing in size and in numbers. Three dainty ones had come down to the lighthouse in the cool of the May night, and scampered away in the dawn. That was miles out of bounds for them, the preserve being westward before you come to Pottohawk Point. Their taste not running to rhubarb they had not invaded the lightkeeper's garden. Their rutted antlers, four, five or six pronged, are common among the tangled wiregrass of the sandy hollows or the roughbarked cottonwoods trying to keep their toes out of the rising waters of the lake and their heads above the climbing sandbanks of the dunes.

Wolves still haunt the Point, from the Walsingham swamp on the mainland, but the rising generation of new-blooded deer seem better able to cope with them than their inbred predecessors. Three times lightkeeper Lorne Brown found the older, smaller deer slaughtered on the shore by these poachers. The wolves had only eaten the haunches leaving the rest of the carcasses untouched. Occasionally a runaway farm dog strays the Point, but the wolves and resident dogs do not welcome him. One big collie was chased by the lightkeeper's little dogs, while we were there, for in this desert of ponds, sand hills, swamps and beaches no maverick meets a friend, either among animals, snakes, turtles, birds or fish.

LONG POINT has worn the title Graveyard of the Great Lakes threadbare, but its crepe festoons were over-earned in schooner days when all through traffic had first to find and then avoid it.

On this particular morning, before they reached the base of the lighthouse, the sun's first rays gilded and glorified the handiwork of Sheldon Cook, early keeper or attendant of the slender shaft which whirls the gleam of its thousand facets nightly to the lookouts of the long ships passing.

"Shelly's" first monumental effort was two inch boards, battened together, rounded at the top with recessed corners, to form a tombstone. Thirty-seven years ago he had painted both sides white, and inscribed on the one to face the sun, in bold black letters:

He planted it at the head of a trench, scooped to water level and mounded high with fresh sand, over the remains of a sailor of the Marquette and Bessemer car ferry No. 2, a big powerful steamer lost in the lake between Cleveland and Port Stanley Dec. 9th, 1910.

Nobody knew what happened to her, but, as The Telegram pointed out at the time, she probably broke down in the raging blizzard and fell into the trough of Lake Erie seas which filled through her stern entrance, wide open for her 50-ton freight cars. Next morning one of her boats washed in near Long Point light with nine lifebelted dead men in it, the ninth and youngest a corpse like the rest but not rigid. His body had been protected in the bottom of the boat by the frozen mass of the eight huddled above him.

All nine bodies had been removed by the railway company and sent home for burial. But a year later, when the tenth victim washed in, with his waterlogged papers and lifebelt, a mile from the lighthouse, nobody claimed what was left of him. So Sheldon Cook buried him with care and prayer, that at least this one of the thousand victims of Long Point since La Salle's time might be known to more than God only.

Suns and snows, gales and sands, for a hundred and forty-eight seasons, had scrubbed away every vestige of paint and lettering, leaving the smooth sanded grain of the wood silver grey in its weathering— and Sheldon's good deed to shine in letters of gold on high.

There was nothing morbid about "Shelly." The same rays which touched this wooden tombstone of his threw the shadow of the light house shaft on another of his friendly memorials, one he or his chief, lightkeeper Porritt had made at Port Dover, a little concrete obelisk of cement, red-painted atop to bring out the scratched inscription

This means that Walter Lick had walked across Lake Erie from his hometown, in the States to Long Point in Canada between dawn and dark that February day. "NE" means North East, which is a town in Western New York State, close to the Pennsylvania border, 26 miles as the gull flies, and still farther as Walter walked, for when he stumbled ashore in the twilight, he said he had to go many miles out of his way to get around the cracks or open water too wide to jump. Lake Erie was frozen from shore to shore that year.

When a man wanted a job in the hard times of 1913 he walked fast to it, and if he couldn't walk, he ran. Next day, refreshed, Walter trudged another twenty-six miles on across the solidly frozen Long Point Bay, which lies between the lighthouse and the Canadian mainland, for "Shelly" had told him he could find work cutting ice at Port Rowan. He found the job, but not pleasantly, for, arriving in the dusk he went through one of the lanes the cutters had been working at, which had not frozen again enough to bear his weight. "Shelly" used to call this the payoff for walking sixty miles, dryshod across Lake Erie to get into a wet job. The monument to Walter's feat was set up on the lake shore where the hero landed, and when the waves began to scoop out the sacred spot it was moved for safety to the lighthouse walk, where it stands.

Capt. Graham, born May 12, 1855, entered his 94th year this week. Two years ago, while briskly cleaning up his yard, he had the misfortune to get his hands severely burned, but these have healed, and although they are still very tender, Schooner Days has just had the pleasure of a letter in good firm handwriting from this valued friend, with some snappy comment on the greatly needed harbor improvements at Port Credit, Oakville, and Bronte, and a list of the steamers built in the Simpson shipyard below Lock 5 on the Welland Canal. These were the propellers Persia, Asia, Lake Erie, Lake Ontario, Lake Michigan, the steam barge Clinton, the Grimsby, which towed and sailed, and also the "barque," later three-masted schooner, Dundee. The latter had at first a brailing squaresail, a square topsail, and double raffee or batwings above it. All these Simpson vessels, he added, were on finer lines than the "Old Canallers," in which the neighboring Shickluna yard specialized.

WHERE THE FIRST BEAMS FALL 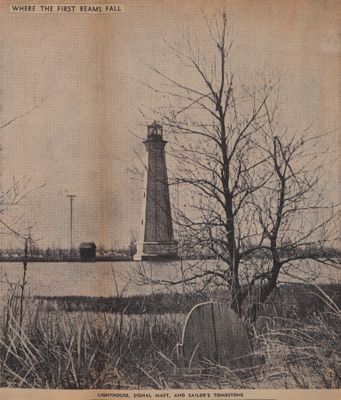