IN the old days wrecks and disasters took the lives of hundreds of lake sailors every season. In 1869 alone 540 were drowned. The casualties were highest among the wooden sailing vessels and Long Point near the middle of Lake Erie, had more than its share. Two lifesaving stations, one at each end, were kept busy. Both have been abandoned. Many of the wrecks on Long Point were fatal, and many sailors sleep unmarked in the sands. One of the gruesome features of this lake mausoleum is that it is automatic, like some monstrous robot gravedigger.

The spits which trap ships and men swallow them up and leave no trace. Winds and waves shovel the shifting sand in so fast that large objects disappear in 24 hours and trees may be buried to their topmost twigs.

In a careful search of the shores of the Point at the beginning of this month not one complete wreck was discoverable, though the beaches were actually lined with ships packed as close as stones in a long-used cemetery. Only a few years ago ribs, planking, sternposts, stems, centreboard boxes, transoms, keelsons and floor-timbers ringed the lakefront like a broken rail fence, and occasionally a whole hulk could be seen. Since La Salle's time two hundred vessels have found Long Point fatal, and two hundred more have rued its acquaintance.

But Lake Erie has been "high" for the last five years, narrowing the beaches by hundreds of yards in places. Ice and high water have swept away whatever is moveable, and the sand has buried the rest. Yet there are still thousands of pieces of identifiable ship wreckage among the driftwood, tree trunks, sticks, rushes and bottles that line the shore—lifebelts, hatch covers, fish boxes, cabin doors. Sometimes you find a mast far inland, sometimes you can trace the outline of a ship's skeleton. Sometimes you pick up some forecastle stenciling on a board like "FOARD END PORT TANK."

Coming from his second wind-up of the clockwork this morning, Lorne Brown stepped on the sternpost of the hundred-foot wooden steamer Little Bell, buried in the Point hundreds of yards from the nearest water. She was wrecked 70 years ago on what was then the "pointedest part of the Point," in shallow water east of the original lighthouse. This light, built in 1830, was threatened by "deep water" coming close to it, so a second was built in 1843. But the deep water changed its mind and the sand marched past the first lighthouse and the second, eastward, ever eastward, until a third lighthouse, the present one, had to be built on a 12 foot foundation. This was 1916.

In the 32 years since, the sand has spread a quarter of a mile or more past, the third lighthouse, and now the tip of Long Point is a full mile from the site of the light that was threatened by deep water, and the wreck of the Little Bell lies inland from even the present light, in the very marrow of the first joint of the battered "finger" of Long Point.

Not far from it, but still more inland, we came across a huge iron-banded log, perhaps 18 inches in diameter, identified as the heel of the foremast of the wooden steamer C. W. Elphicke, not the tug of that name but a large steam barge with full bow and narrow stern which preceded her, and was wrecked on the Point in the 1880's.

On the Bay side of the Point, within a few rods of poor Wilson's grave, described last week in Schooner Days, the bass were playing around the bones of the schooner Leadville, one of the later Oswego-built vessels. How she came to grief here is not known; the year is said to have been 1883. She was unlucky, for in 1882 on Nov. 17th, she sank at Port Dalhousie, after striking the pier.

Naturally, wrecks on the Bay side of Long Point were fewer than on the lake side, for the lake storms would leave the Bay side a snug lee for any vessel, and from a nor'-easter or nor'-wester scourging the Bay a ship had only to run around they Point to find shelter in the lee of the lighthouse. Perhaps the Leadville was caught trying to do that.

A little farther up, on the Bay side, near Gravelly Bay, lies the wreck of the steamer Pratt, which sheltered there, leaking badly, for some days, and then took fire. And farther east of Bluff Point is the wreck of the steam barge Siberia. She too burned in the bay. There was another Siberia, three-masted timber drogher, wrecked on the lake side of Long Point, near the Old Cut light. One of her horses, used to work the timber-capstan, came ashore alive, though with a leg broken, or badly injured. A broken leg is usually a death sentence for a horse, but Wm. Deckman the keeper at the Cut light found him and cared for him, and he worked around the light house and lifesaving station for years and so earned his keep. This Siberia was a member of the Garden Island fleet of timber droghers. Calvin and Breck having several "geographic" schooners, including the Prussia, Bavaria, Denmark, Norway and Sweden. It was sixty-five years, ago. Keeper Deckman's son is now 87. Years afterwards Frank Mason of Port Rowan, took out great oak timbers from the sand in which the wreck was bedded. Some of them were 18 inches square.

We cannot name all the wrecks Long Point has claimed, but we have twenty more to tell about next month.

HERE LIES THE HEEL OF THE "ELPHICKE'S" MAST

Department of Transport Radio Operator Joe Merrifield of London, and Light Keeper Lorne Brown, of Port rowan, and his son, Leonard Brown, examine foundation stones of first lighthouse, built in 1830, and ancient and modern wreckage high and dry from the third and latest lighthouse on the marching eastern extremity of Long Point. It has travelled more than a mile eastward in a hundred years.

After his vigil, Lightkeeper LORNE BROWN steps on a wreck past which the Point has marched half a mile since the second lighthouse was built.

THIS is where BRONTE's LIGHTHOUSE was, but isn't at the opening of navigation, 1948. This is the wreck of Bronte's eastern pier, a safeguard to mariners for 50 years, now a menace. Bronte is a fine place to go, nevertheless. 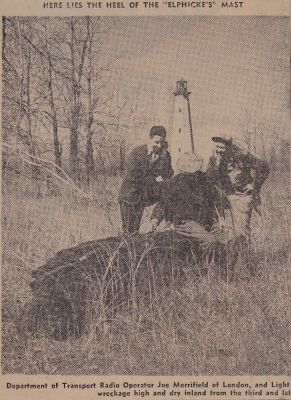 Where Bronte's lighthouse was