EVERY vessel bound down from lakehead to tidewater, every ship climbing the stairs of the Great Lakes between Kingston and Duluth, has to pass Long Point in Lake Erie. There is no other sailway from Superior to the sea.

Of all the dear old English names transplanted to Canada by Governor Simcoe the most appropriate was "North Foreland," which appears on Long Point in an old map for which we are indebted to Helen Merrill Egerton. How long this stuck we do not know, but as all southbound traffic from the Thames has to pass the North Foreland in England so all Lake Erie commerce passes Long Point in Canada.

The Point is twenty miles long and twenty feet above water in its height. At night or in mist it is only recognizable by the light flashing 102 feet above its eastern tip, or the moaning roar of its horn, which sometimes dins forty-eight hours on end. In snowstorms and fog light and land may be invisible even at a hundred yards distance. The water all around is shoal, dropping to 26 fathoms two miles outside.

Radar, automatic soundings, ship telephones and radio in general have done much to save life and simplify navigation, but Long Point, for a hundred years, deserved its title, Graveyard of the Great Lakes. It is ringed with the ribs of lost ships.

La Salle, first lake navigator to pierce beyond the thunders of Niagara, only saved his Griffon from a sandy grave by a bold decision in the dark. She entered Lake Erie with no charts except memoranda of Galinee's and Dollier's north shore canoe passage in 1669-70 and after sailing' all day, Aug. 7th, 1679—

"Night came on, and a thick fog concealed the shore from which we supposed ourselves some ten leagues distant.

"I heard breakers about a league ahead of us . . . The pilot wished us to crowd on sail to gain an anchorage . . . but as I knew these two sand banks (Long Point? and Point Pelee?) extended out very far, and as I was of opinion we were near to the one, which was in fact just ahead of us, I ordered, notwithstanding everybody, that we change the course, and bear east-northeast, instead of going as we were west north- west, with a light wind from the southeast.

"We sailed two or three hours, sounding constantly without finding bottom, and still we had the same noise ahead of us. They all insisted that it was only the wind, and that it was the sandbar which made a circle and surrounded us on the northside from west to east.

"In fact an hour later we found only three fathom. Everyone worked ship (probably by oars and poles, for the wind was very light). I tacked and bore to the southwest, always sounding without any bottom. At length the fog lifted, my conviction proved true, and they all saw they owed their escape from danger to me."

Some think La Salle named the sandbank of Long Point Cape St. Francis, but Father Hennepin's account says that on the second day out from Niagara, having sailed sixty-five leagues in all "we doubled a Cape to the Weft-ward, which we called the Cape of St. Francis," which would indicate Pointe aux Pins, near Rondeau, 95 miles west of Long Point, or Point Pelee, 40 miles farther on. Point aux Pins is 155 miles west of Niagara, a good guess from Hennepin's 65 leagues, which could be 195 miles. The Griffon's course, as already shown, was not in a straight line and included some back-tracking.

Radio Operator Jos Merrifield of London, Ontario, who works Long Point lighthouse radio station for the Department of Transport, can now fly in to work with his Piper Cub.

Operator Merrifield has raked a runway clear of wreckage on the hard sand of the south shore, and a jeep "plunges and tacks and veers," now in water, now in sand, with jags of lumber for the worn-out walks used to keep the lightkeeper above water on his rounds. The lumber, needed for years, is cut in the western and "civilized" part of the point, once covered with stands of oak and pine, now with shooting boxes and summer cottages. Elsewhere no tree grows but cottonwoods and firs. It was cutting the timber eight years ago that sped the Point eastward in a series of sand dunes.

But for the lighthouse and radio station, the eastern part of the Point is as primeval today as in La Salle's time: sand, snakes, turtles, muskrats, deer, wolves and birds. Lightkeeper Lorne Brown sends thousands of birds to the Royal Ontario Museum. In September, nineteen years ago, 1,260 dashed themselves to death in 24 hours against the thick plate-glass panes and thicker concrete sides of the lighthouse, blind flying in the fog.

We are really taking a long time over the wrecks on this old "North Foreland." Next week we promise really to get down to them.

BUILDING OF THE GRIFFON on the Niagara River, while the savage Senecas marvelled, muttered and made the best of it. The Griffon, Lake Erie's first sailing ship, was also almost Long Point's first victim. 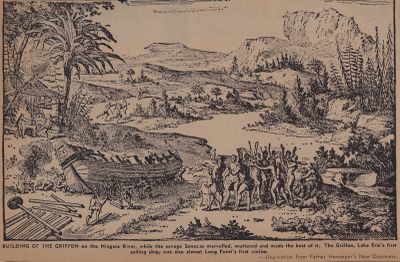