SO INTERESTED was W. E. G. McLennan in the Telegram story of the old Cibola a month ago that he kindly supplies this "missing link" in what became of her ultimately.

"Here I go back to my boyhood days, being raised in Stratford. Trips to Toronto in the 1890s were big events, and oh how I liked to go to the waterfront and look at the boats, Mayflower, Primrose, Shamrock, A. J. Tymon! A trip to the Island was a thrill like the voyage of Columbus. I was beginning to read newspapers, and after finding the waterfront column I have never let up.

"One day about the beginning of the century. I was walking with my sister along the old Toronto waterfront, then called The Esplanade, and we saw the old empty hull of the Cibola, name and all, beside an old wharf a little east of York st., perhaps at the foot of Lorne st."

Mr. McLennan supplies a little map, freely paraphrased thus: Miles of railway track then cut off the city above Front st. from the water, and a new forked bridge with steep grades crossed the tracks at York st., spreading east and west in a sort of Y. The wharf where the Cibola lay was east of the bridge foot and about opposite a factory of dark red brick owned by the Cobban Co., or Williams Mfg. Co., the first attempt at developing the waterfront south of the tracks, which had been, made by filling in with ashes and street sweepings. One ferry wharf at this time was at the foot of Bay st. farther east than' the old wharf where the Cibola lay, and there was another ferry wharf at Brock st., half a mile west. The "shore line" pushed out into the bay by filling and cribwork, was a quarter of a mile north of the present one.

FIVE BURIED IN THE BAY

"The Cibola lay with her bow in the mud, right at the shore end of the old wharf, and astern of her was an old schooner, perhaps a stonehooker. When the present Harbor Commission was formed and modern development began the bottom of the bay was pumped out by a "wonderful new dredge"—and she was a wonder—and sand and mud flowed I out of the end of the big pipe and filled in a great area, overrunning the old wharves and slips and burying whatever had been left behind.

"The water drained away, leaving a layer of sand many feet higher than the harbor level, and this was supplemented by dumping "clean" earth according to the signs. Among other "skeletons of the boneyard" which thus disappeared were the hulls of the small schooner F. F. Cole, the larger Echo, and the still larger Annie Mulvey, burned in the Esplanade fire of 1885, and the steel cylinder of the Knapp roller boat. Mr. McLennan says this sand inundation also buried what remained of the Cibola.

"Her buried remains I think will be underneath the railway tracks of the lines which the freight trains used to by-pass the Union Station. The men who advocated the harbor development were men of vision. We owe them a debt of gratitude for their determination to put over the development of the waterfront of which all citizens are very proud. Toronto is now faced with another big development. Present prejudices against expansion should be forgotten. Toronto will be a real big city on the American continent of which the present generation will be proud and of the foresight of the progressive leadership of 1950."

CIBOLA IN HER PRIME 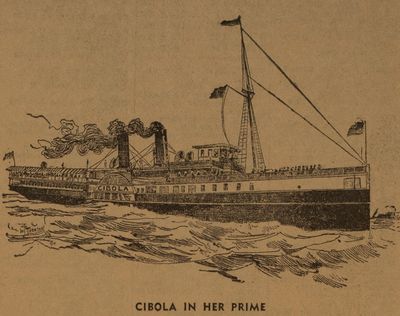