NEVER mind, soldier, if the halliards were fouled and you got the flag upside down over the Armouries on Dominion Day. Politicians have made worse mistakes and been praised for them. And besides, the flag was the red ensign of the merchant marine of Canada. The whole of Canada is welcome to it—but don't ask the merchant marine to give it up to the army.

These remarks and others are prompted by a hail from the Armdale Yacht Club of Halifax, asking about flag etiquette ashore and afloat. It is also a problem for summer cottagers and the tourist season, so in answer to many inquiries Schooner Days offers this:

Beginning with the club, camp, or cottage flagpole standard practice is to hoist the club's burgee or owner's private emblem to the top of the pole or the signal mast, on a staff which lifts the flag clear of the truck. The truck is the button-shaped cap which covers the head of a mast and keeps the rain from rotting the end-grain of the wood. If you have no burgee or private emblem, hoist your national flag or club ensign to the truck, belay your halliards, and put your hat on again. You and your flagpole are now properly dressed.

The Union Jack is still the national flag ashore. Some people never can tell which is top or bottom of it, and some are afraid or ashamed to admit their debt to the United Kingdom and the British Empire, and the ambiguous Commonwealth, of which it is also the national flag.

It was undoubtedly difficult to pick out the Canadian exhibit from the United Kingdom exhibit at the last World's Fair, with both smothered under Union Jacks. So the beautiful red ensign of the Canadian merchant service, with the arms of Canada in the fly, has been generally adopted as the distinguishing flag of Canada, and is properly shown as the national flag on land as well as afloat.

If your flagpole has a signal yard across it, use it for displaying the ensigns, or burgees of other clubs or individuals when they are your guests. Save the starboard yardarm (right hand end, soldier, eyes front) for your own national flag, or your burgee if you have one. The foreign or visiting ensign (say the Stars and Stripes) should occupy the port yardarm, which is the left hand end with eyes still front.

If your flagpole is rigged with a gaff, the peak of the gaff (the higher end), is the right place for your national ensign. Otherwise, send up to the truck, as said.

The peak is the place of honor. But remember, the peak is not the top or tip of the mast. It is the end of a gaff—and the bottom of an anchor.

Never hoist two flags side by side. It is no discourtesy to show your own flag above the flag of a visitor, but it is technically treasonable to show a foreign flag above your own.

Never use the Union Jack afloat unless you are an admiral. Its place is ashore. You will tell me you have seen thousands of them on put-puts and puff-puffs: 999 of them were wrong. What may be properly displayed afloat by all is the Pilot Jack, which is a little Union flag with a white border around it; originally a signal for a pilot, now a proper decoration when the ship is at anchor. It is always worn forward, at the bow, on a staff or a stay.

Never use the White Ensign or the Blue Ensign, either, without getting an Admiralty Warrant — and, like an income tax refund, try and get it!

Your ensign, the red ensign of the merchant service, may be worn at a staff at the taffrail, but when underweigh it is properly worn at the peak of the gaff, or high up the leach of the mainsail if you are marconi, It may also be worn at the masthead, under the burgee,—not necessarily the highest masthead, but always the aftermost masthead. That's all for now.

This diagram shows correct usage both for Canadians wishing to show courtesy to American visitors and for American visitors wishing display their own flag properly in Canada, The "American Jack" at the top should only be by American nationals. It is a blue square with white stars. Canadians should use their own—either their private flag, club burgee. Union Jack or national ensign—in this place. The Canadian flag must be used either at the main peak or the masthead, whoever is honoring or being honored. The proper place for the visitors flag is at the end of the port yardarm or spreader. 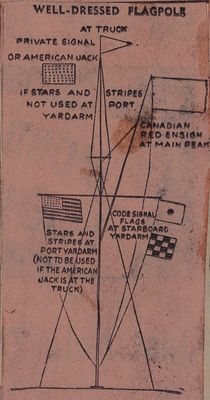