A PLEASANT HAIL from "one who has enjoyed your Telegram articles covering the many lovely rural spots around Ontario" perhaps should be readdressed to Dorothy Howarth and Elizabeth Cuddy who make the wayside wilderness blossom as the seed catalogue rose. But the sender's address — Mrs. Harold A. Clarke, 71 Lake Shore road west, Port Credit — reminds us almost startlingly of how that dear and ancient haven of the stonehooker has grown from one split-shingle roof over a log stopover for travelers to a modern city with numbered houses and named streets and 4,000 inhabitants.

Port Credit had names for some of its streets even a hundred years ago. Lake Shore Road was most natural, for it was the first through highway. But it was called Toronto street in 1852. Stave Bank Road was lined with stacks of winter-cut staves all the way back to the primeval bush; and Bay street had been borrowed from Toronto and perhaps Port Street. There was a Lake Street along the shore front west of the river, a wagon road rather, but with houses on both sides of it, and this was south of the present street on top of the bank. Lake Street, and its house sites and gardens, are now out in Lake Ontario, or rather the lake has eaten in over them for fifty yards or more, tearing down the high bank till stopped by groynes and cribwork. The water has also washed away "Goose Point," which at one time projected southward below old Lake Street, with two or three sailors' or fishermen's cottages on it.

Jack Yorkshire's was one of the cottages. It was here that the body of his daughter Peggy's sweetheart was washed in, to her very doorstep, when he tried to keep a Valentine tryst.

It was in an open winter, long, long ago. It had been so mild that the steamer Chief Justice Robinson, with her ploughshare bow, was making trips between Toronto and Niagara all through, landing her passengers on the harbor ice inside the Queen's Wharf when she was unable to reach the main passenger wharf at the foot of Church Street, below the Wellington Hotel.

Boyfriend had gone across to the Cliff House in the Niagara river in a little 20-ton schooner about the size of the Ann Brown called the Nine Brothers. She had been playing snowbird like the big Chief Justice, and maybe more profitably, for it was hinted that she was a smuggler. They had them in those days. Yellowhaired Peggy Yorkshire had promised to dance with him at the sailors' and fishermen's ball on St. Valentine's night, in Port Credit. It was held in the long room above the driving shed of the old log hotel where Simcoe provided the blockhouse and accommodation for travelers in 1793. The present Port Credit post office and government building is near the site.

Came the 13th of February, cold, with no wind, but broody weather. The captain of the steamer Transit took a look at the leaden sky and the ice cakes in the river, and said "No trip today, Chief Justice or no Chief Justice." But the Nine Brothers hoisted sail and daringly floated out on the Niagara current. She had a dozen passengers anxious to get home, masters and engineers of steamers laid up at Twelve Mile Creek, by the freezing of the early wooden-locked Welland Canal. Perhaps, too, she had cargo which did not crave customs inspection. She quickly disappeared in the fog-smoke curling up from the steaming lake. Before the day was done came a sudden change, lots of wind and the long-deferred snow.

The Brothers, close-reefed, was found capsized in the ice bank west of Niagara, near Twelve Mile Creek, long afterwards, with not a soul on board. She was refitted, and was renamed the Empire. Later she was sailed by Joseph Williams, Sr., a color sergeant retired from the old 100th Regiment and the London Rifles.

But the boy—he was waiting for Peggy, at her father's doorstep first thing in the morning after the Valentine ball. Peggy, deeply mortified at being left a wall-flower all evening, had come to the door full of what she was going to say to the boy the next time she saw him. But he said never a word. His lips were sealed with the lake which had silently brought him. He was so encased in crystal ice that they needed no other casket for his funeral.

All this was long ago; before Port Credit got street names or house numbers. It was in February, 1845, in fact. You can read about it, in part, in the old Toronto Examiner. Capt. Joseph Williams, Jr., when he was 83, and Abram Block, JP, of Port Credit, when he was 80, told the writer the rest.

Mrs. Clarke, who hails so cheerily, encloses a photograph of a charming painting pf the old Port Credit harbor-not of 1845, but as it was twenty-five years ago. it made a good Christmas card. It represents sympathetically the old port with its entrance piers all gone but its darkened lighthouse still standing, like a blind man up to his knees in water.

All the forty stonehookers which thronged the port as late as the beginning of this century were gone also. So was the row of storehouses and grain sheds which stood on the east side of the harbor up to 1885. Port Credit had not felt the strong surge of urban development when this picture was painted. The artist captured the spirit of the old homes washed away from vanished Goose Point and the sweet air of simplicity and wholesome lake freshness which continues among the charms of present day Port Credit. 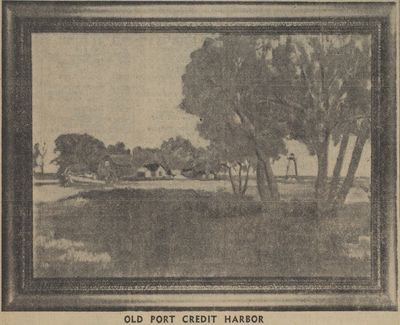