IT was young-timers' night in St. Andrew's Presbyterian Church on the Stave Bank rd. in Port Credit last week, and Schooner Days has never had a happier going-over.

The Navy was there strong—not in uniform of course—but two commanders, the Jacksons, father and son, one in each war. A dozen members of the Port Credit Yacht Club went into the last war as ABs or leading seamen or how they could get in, and came out lieutenants and frigate commanders. Lieut. Jim Bradley wasn't at the church with his Port Credit wife, because they are now living in California. But the Navy was swamped by descendants of the ancient and honorable profession of stonehooking, in which we are proud to have participated. That was 50 years ago.

It was still close enough to the Sivinteenth to be wearin' o' the green, and the men's club, who had started the thing, accepted St. Patrick as a good Presbyterian pro tem, even if shaky on predestination and the Shorter Catechism.

For that matter there were lots of United Church and no-church and dwellers in Mesopotamia, and even Toronto there; and ladies, lovely ladies, which is pretty good for a Presbyterian men's association. The ladies came in strong with plates of nice sandwiches and chocolate cake and cake With white frosting and green shamrocks, and lashings of coffee.

Harvey Corey — the Coreys have been fishermen out of Port Credit for generations — was the chairman, with a jewel of a St. Patrick's tie. Philip Sawford, ATCM, the church organist, was at the piano.

Rev. Mr. Jackson, the minister led off singing Killarney and My Wild Irish Rose, and Gordon Jackson melted all hearts with the Rose of Tralee and the bower of roses by Bendemeer's stream.

Old Mr. Gordon, township clerk, retired, 92 and bright as a dollar, was in a front seat, and was asked if he recalled the Newman brothers' names. "I remember the Maggie Hunter being lost, and I remember two Newman brothers, William and John, said he. "But I am not sure those were the ones who were in her."

"Do you know who was the cook?" he was asked. She is mentioned in the ballad, but not named.

"I don't know her name, but she was not a Port Credit woman, but came from down the lake."

According to our information the cook was Eliza Kennedy of Kingston. Hers was the only body found. A cross marks her nameless grave in the beach at Point Traverse in Prince Edward County.

So we were well away with Port Credit reminiscences of wrecks and rescues and the hotel which Governor Simcoe built in 1793, and Robert Lynd kept till he tore it down and moved it in 1861. And Rebellion times. And of Grandma Blowers, who raised a family, of six in the Catharine Hayes when she was left a widow, and Aunt Betsey Sharpe, who was a Block, and comforted hundreds in Port Credit, among them George Sharp's widow, who had foreseen the tragedy in a dream. And Alex Blakeley, the harbormaster, and the schooner he built and called after his daughter, Minnie Blakeley, and the big fire of 1855, when James Cotton, his own general store burned to ashes, saved the hooker fleet by distributing all the buckets among them so that they could drench their decks.

The discussion brought in battalions of Blocks, and Naishes and Hares, and Coreys, and Lynds, and Blackeleys and Peers and Blowers. This last name is also Blower and Blow, as used at present. It apparently began the same as the name of the prosperous Toronto brewer commemorated by Bloor st. It's that way in the first Dominion marine register.

It was a jolt to find that these men and women, who knew all about Abram Block, J.P., and Capt. John Miller, the light keeper, and Emily Blowers and her sons Tommy, Mark, James, Abe and George, nicknamed Samson, and the Naish brothers, and Mary Naish, and George and Bob Corey and Al Hare and Stephen Peer, and James Robinson Shaw—were not contemporaries, but mostly grandchildren. The third generation! Yet, how could it be otherwise? Stephen Peer and Mr. Gordon are still lively, but ninety. Not many of us can keep up with them.

Something I'd like to know more about is the bottom of a vessel in the lake outside the starch factory at Port Credit. Several had seen it, and said it was where a steamer or sailing vessel had caught fire and burned to the water's edge many years ago. All on board were lost. The sunken hull had filled in with beach stone. Who knows the name of the vessel, or when this happened?

"A HOUSE BY THE SIDE OF THE ROAD" 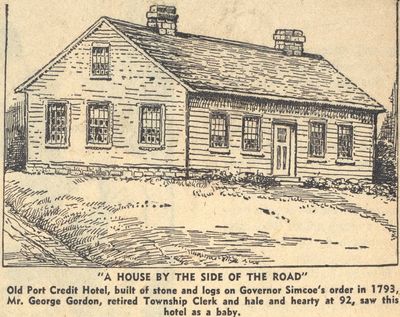