Full Text
The Man behind Them
Schooner Days MCCLIX (1259)

Guns of the NANCY

WILDEST hope had never expected sight of the face of that great hero of the Canadian lakes, Alexander Mackintosh, master of the Nancy.

Yet last July he shed the light of his countenance upon Schooner Days from a gilded frame in Moy Hall, mansion of The Mackintosh in Inverness-shire.

We proudly acclaim Alexander as a great Canadian. That he was born in Detroit does not make him otherwise. Detroit was then British, part of the Province of Canada taken from the French in 1760 and held against Pontiac's besieging hordes. It was not given to the United States until 1796.

Alexander's father, whose portrait suggests a cultured divine, settled in Canada as factor or agent of the Northwest Fur Co. He was a great business man, with wharves, ships and warehouses. Detroit was the greatest British post and port west of Montreal. Alexander's mother was Canadian born. She was Archange Saint-Martin daughter of one of Montcalm's officers.

Alexander's father moved across the river to the site of Windsor when Detroit was given up. Here he built Moy House, a two story mansion of logs. He called the port he had formed with his wharves, offices and shipyard Moy, from the clan war-cry, "Loch Moigh." He became the Hon. Angus McIntosh (this variant in spelling was his choice), a member of the Legislative Council in Parliament.

"Touch Not The Catt Bot (without) a Glove," is the Mackintosh motto. Angus McIntosh rendered great service in the War of 1812, which threatened all he possessed, and his son Alexander fought for Canada throughout the war as fiercely as all three catamounts which form the family crest.

He was only a toddler sailing adze-chips in the shipyard puddles when the fur-trading schooner Nancy was launched in 1789. Little did he or his father dream that in 1813 "wee Ellek" was command this vessel in the King's service, or that each of them in turn would later become chief and captain, both of Clan Mackintosh and Clan Chattan.

Alexander's prowess and feats in wilderness warfare are legendary -- and authentic. His defense of the Nancy against American encirclement with two brass 4-pounders was mentioned last week. After that he had a terrific battle with Lake Huron in autumn rage. He brought the Nancy -- and the King's gunpowder -- through safely, and for two seasons was the mainstay of the beleaguered British garrison which held Mackinac and the West.

When his Nancy went down in flames with colors flying he was in the forefront of her avengers.

He was in Lieut. Miller Worsley's boat, one of three which in the dark closed in on the U. S. Schooner Tigress, one of the Nancy's killers. She opened fire as soon as the muffled oars were heard. The three boarded her almost simultaneously, and her deck was filled with a hundred men, hacking, hewing, shooting, stabbing by the light of flashing flintlocks.

A giant negro was in the act of applying the slow-match to the 24-pounder gun amidships, whose charge of grape and shrapnel would have cleared the whole deck of friend and foe alike. Alexander Mackintosh bounded over the bulwarks, swinging his cutlass as he came. Whoosh! The gunner's head shot overside.

Alexander's charge was so furious that he seized the great body before it could drop. "Follow yir heid, mon, follow yir heid!" he yelled, and hurled the trunk over after the bobbing head.

The Tigress taken, she was used as a decoy for her consort the Scorpion, another of the Nancy's slayers, known to be in the vicinity. Alexander was probably at her helm when she was run aboard the latter vessel, and the Scorpion was also captured.

The King now had two ships where, after the Nancy's destruction three weeks before he had none at all. Control of the Upper lakes, brilliantly regained, remained in British hands to the end of the war. 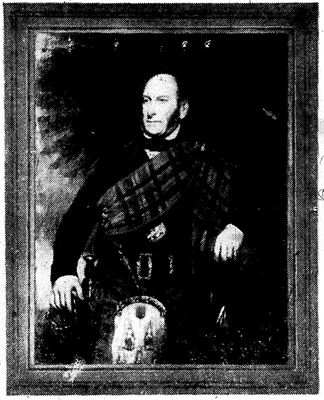