Item Type
Stereographs
Description
Stereoview of three crew watching the unloading of iron ore from the Pittsburgh Steamship Company laker WILLIAM R. LINN in Cleveland Ohio. Parts of the hatch covers lie on the deck between the hatch openings.
Notes
The crew in this picture are the same as in another of Underwood & Underwood's stereoview of unloaded ore in Cleveland where the vessel is identified as the LINN
Inscriptions

Reverse "7964. Geography.--We are in the immense dock-yard of Cleveland, Ohio. This city was founded soon after the Revolutionary War by General Cleveland of Connecticut. It is located at the mouth of the Cuyahoga River, in the northeastern section of Ohio. Its splendid transit facilities, by rivers, canals, and the Great Lakes, have developed the city into the greatest commercial centre of the state. The number of people living in Cleveland in 1910 numbered 560,663.

Products and Industries.--This huge bell-shaped implement which we see in operation is run by electricity and is called a "clam." When it is lowered into the hold of a boat the two bottom sections are raised, and as they come together they not only hold the ore but they scoop it up also. These "clams" have a lifting capacity of five tons. With this capacity and several "clams" working simultaneously, it does not take long to empty one of the lake steamers. The iron ore must be carried considerable distances sometimes because it is necessary to use coke furnaces in order to smelt it and it is more convenient and cheaper to build and operate the furnaces and rolling mills near the great markets for iron and steel.

History.--During the War of 1812, the Great lakes were the scenes of some of the most decisive naval battles of contest between Great Britain and the United States.

Refer again to this view when considering Cities and City Life, People and Homes, Manual Training. 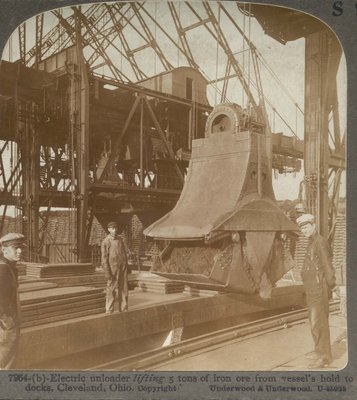