Two Harbors is a city with a population of 5000. It is 30 miles northeast of Duluth. It is on Lake Superior and owes its importance to its heavy shipment of iron ore.

About 50 miles northwest of Two Harbors is the greatest ore-producing section in the world. The Mesabi Range of mountains crosses Itasca and St. Louis counties in Minnesota. This range averages yearly almost 30,000,000 tons or iron ore. This is one-third of the world's total supply. A railroad connects Two Harbors with the great ore-producing district of both the Mesabi and the Vermilion Ranges. Every day, train-loads of ore are brought to this city.

Here are shown the docks into which this iron ore is unloaded. On the dock at the right you will see a great many ore cars dumping their loads into the ore pockets. From these pockets you will notice iron pipes leading from the dock into the nearest boat on the right. The mineral runs almost directly from the cars into the vessels. Iron ore does not flow as readily, however, as does sand or gravel. A great many men are employed to punch it through the openings in the bottom of the cars and also to keep it running out of the dock bins into the pipes.

These boats you see here will travel the length of Lake Superior and then pass through the "Soo" Canal. From there they may travel southward, the length of Lake Michigan, to Chicago. Or more likely they will head for Lake Erie so that their cargoes may be discharged at Toledo, Cleveland, Ashtabula, Conneaut, Erie, or Buffalo. The boats, on their return trip, will carry cargoes of coal and coke.

Trace a cargo of coal from Two Harbors to Buffalo. Locate the cities named. 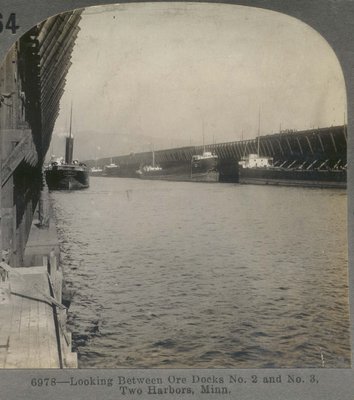