Oct. 13.—The fishing tug Leo, of Kenosha went ashore at South Milwaukee during a heavy blow and the crew escaped In the yawl. The Leo was on her Way to Milwaukee to go intq dock to have a leak stopped, but in the storm the leak became so bad that the captain beached her. The crew consisted of four men.

Oct. 14.—The schooner Churchill, 1010 tons, 202.4 ft. length, in tow of the steamer Majestic, bound to Chicago with ore cargoes from Lake Superior, foundered off Waukegan and became a total loss. Two of the crew, the captain and a sailor went down with the schooner the others including a woman cook were rescued by the Majestic with great danger estimated loss on vessel $35,000, cargo $3,500. The Majestic likewise came within an ace of going down to Davy Jones' locker and was towed into Chicago with her amidship deckhouse stove in, the boiler house badly damaged, and the hatch covers were reduced to kindling wood by the heavy seas which boarded her. Seldom has a boat come so near destruction and escaped.

Oct. 16. --The schooner A. J. Rogers, 340 tons, 173.5 ft. length, stranded on Mission Pt. during a heavy gale and stove a hole in her bottom. She was released by the wind afterward, but finally went to pieces and sank. The crew escaped with their lives. Vessel and cargo were fully insured.

Oct. 17.—The schooner Annie Dall, 150 tons, 111 ft. length, dragged her anchors and went on the beach at Jacksonport during a heavy ESE wind. The crew escaped. The vessel was afterward released, but capsized and went on the beach near the same place she first stranded and became a total loss. She was laden with wood for Milwaukee. Loss on vessel $2,500. Cargo $150. No Insurance on either. In the same blow that the Dall was lost the unrigged barge Harry Johnson, broke away from the wrecking tug Wright, after leaving the Dall to her fate. The Johnson went ashore in Bock Island passage and broke up.. Valuation $2,000. No insurance.

Oct. 25.—The barge Biwabik, 1,402 tons, 240 ft. length, in tow of the steamer Gogebic, both laden with grain cargoes from Chicago for below, parted company with the steamer off Twin River Pt., in a heavy northerly gale while the steamer was turning around to run back. The Biwabik had a most miraculous escape from foundering, and the crew owe their lives to the staunchness of the craft. Soon after she broke away from the steamer her stearing gear became disabled, and she dropped off into the trough of the seas and rolled and lumbered unmercifully while the tiller was being rigged. The foresail was raised and this was blown completely from the bolt ropes, also the main and mizzen sails. The anchors were dropped and they held during the night but in the morning they dragged and finally the cables parted. She drifted all the next day and was picked up early in the morning on the 27th 30 miles SE of Sheboygan, by the steamer Mark Covell and towed into Sheboygan harbor damage to vessel $1,500 cargo 13,000 total $4,500.

Oct. 25.—The schooner Barbarian, 298 tons, 186 ft., became waterlogged in a heavy blow and during the northerly gale of Oct. 31st: she was driven on the breakwater at Milwaukee and pounding to pieces became a total wreck. She was laden with ties, a part of which were recovered, likewise most of her cordage. Value of vessel $500.

Oct. 26.—The steamer L. R. Doty, 2,056 tons, 291 ft. length, left Chicago on the afternoon of the 24th heavily laden with grain, and having the barge Olive Jeanette in tow encountered the heavy northerly gale of the 25-26th, and foundered with all on board, probably in mid-lake off Kenosha. The Jeanette broke away before the Doty went down. The cause of foundering is not known, but the machinery in all probability became disabled. Eighteen lives were lost. Estimated value of vessel $100,000, cargo $40,000, total $140,000. The barge Jeanette, 1,272 tons 242 ft. length, was badly used up and rescued with difficulty by Chicago tugs after breaking away from the Doty estimated damage to vessel $4,000, cargo $7,500, total $11,500.

Oct. 31,—The schooner M Capron, 170 tons, 116.4 ft., loaded with cordwood, in attempting to leave the pier at Baileys Harbor in a heavy southerly blow went on the beach and became a total loss. The cause of the disaster was through the schooner Vermont getting in her way. The crew was rescued: Value of vessel §1,000.

The schooner C. Harrison, 137 tons, 94 ft. length, went ashore at Whitefish Bay on the 31st and became a total wreck. The crew reached shore in safety. She was partly load­ ed with wood.

Nov. 6.—The schooner D. S. Austin, 282 tons, 135.2 ft. length, bulk salt laden from Ludington to Chicago, in tow of the steamer E. S. Tice, which also had the Butcher Boy, the Austin being the last in the tow, dragged ashore at Ludlngton during the southerly gale on that day and became a total loss. The tow had started out, but turned back for shelter, when the tow line parted from the Austin. Her anchors were let go but she dragged. The crew was rescued by life-savers. Value of vessel $3,000, cargo $800. The Austin has a record of being wrecked five different times, and twice a total loss.

Nov. 6.—The Schooner Aberdeen, 1046 tons, 211 ft. length, went on the beach at Grand Haven, but was afterward released and repaired. The Aberdeen was the consort of the steamer Tuttle, which foundered off Michigan City. Aiter parting company with the Tuttle on Oct. 25-26th the Aberdeen was picked up in a disabled and waterlogged condition by the steamer Nyack and towed into Grand Haven for repairs. After repairs had been completed she was to have been towed below by the steamer Philip Minch to discharge her grain cargo, which she and the Tuttle were laden, and it was while the steamer Nyack was towing her out of Grand Haven to put her on behind the Minch that the towline parted and she went on the beach. Damage to vessel $15,000, cargo, $36,000, total $51,000

Nov. 7.—The schooner Minnehaha, 59 tons, 61.2 ft. length, in attempting to fetch Sheboygan harbor missed the piers and went on the beach and became a total wreck. The crew of three were taken off by the life-savers. Value of vessel $1000. She was wood-laden from Hedgehog Harbor bound to Milwaukee

Nov. 7.—The steamer Rand, 191 tons, 119 ft. length, with a lumber cargo from Ludington to St. Joseph was disabled by a broken piston in a heavy gale. The steamer Crouse picked her up and towed her ten miles when the tow line parted. The steamer Edward Buckley then went to her assistance and towed her into Grand Haven for repairs. The Rand lost part of her deckload. Damage to vessel $1,500, cargo $1000. The Rand is the same steamer that stranded on Jacksonport reef recently.

Nov. 9.—The schooner S. Thal, 55 tons, 75 ft. length, laden with Christinas trees from Sturgeon Bay to Chicago went ashore off Glencoe, north of Chicago, in a heavy NE gale, and soon went to pieces. Crew of three lost, not five, as has always been reported. The bodies have never come ashore. The value of vessel, is $250 cargo about $200.

Nov. 10—The schooner Iron Cliff, 1,116 tons, 212.4 ft. length, stranded and sank off Van Burean street, Chicago, in a heavy gale, but was afterward raised and repaired. The crew were rescued by tbe life-savers under great difficulty. Damage to vessel $5,000 salt cargo (bulk) $5,000.

Nov. 10.—The schooner Lena M. Neilsen, 86 tons, 79 ft. length, stranded 5 miles north of New Buffalo in a heavy northerly gale, and became a total loss. The loss of the vessel is said to be due to the wreck of the steamer City of Duluth, which prevented the vessel making St. Joseph harbor. The crew were rescued with great difficulty after hanging in the rigging several hours. Value of vessel $3,000, cargo $3,000.

The schooner S. B. Pomeroy, 407 tons, 150.5 ft. length, stranded while coming out of Manistique harbor with a lumber cargo. The Pomeroy was badly shaken up and leaking. She was released and towed back to Manistique where she was stripped and placed in winter quarters. The accident occurred while the steamer F. R. Buell, which had her in tow was attempting to turn around to pick up the Pomeroy after getting out of the river. The Buell went on tbe beach, but was pulled off by the tug Elmer after lightering 150,000 feet of her deckload of lumber. She also broke her shoe and a bucket from her wheel, besides disabling her steering gear, and starting several leaks in her bottom. However, she proceeded to Detroit with the remaining barges of her tow in her partially disabled condition. From Detroit she was towed to Tonawanda by the tug Champion.

Nov. 25.—The steamer John Mitchell, 1,865 tons, 283 ft. length, ran ashore on N. Manitou Island daring a snow storm. After jettisoning 6,000 bus. of her corn cargo, with the assistance of the steamer Dasmond she was released.

Nov, 26.—The small schooner Idea sank near the mouth of Fox river by newly formed ice. She was afterward raised and repaired. Damage nominal.

Nov. 29.—The steamer Desmond, 456 tons, 149 ft. length, sprang aleak and sank after reaching Algoma harbor. She was laden with hardwood lumber for Chicago, The Desmond had a narrow escape of foundering in deep water off Algoma.

The steamer Wyoming has been released from Peshtigo reef and repaired, and the Rand from Jacksonport reef.

The names of the vessels which passed but of existence, together with the tonnage and estimated value are appended in tabular form as a medium of ready reference: 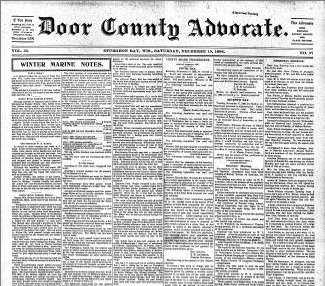