Creator
McIntyre, A. C., Photographer
Item Type
Stereographs
Description
Stereoview of the ruins of Fort Haldimand on Carleton Island. The view is from the island's north harbor.
Notes
The history of the island on this card is unreliable and shouldn't be quoted without other verification.
Inscriptions
Reverse:
Scenery Among the Thousand Islands, on the River St. Lawrence.
From the Photographic Studio of
A. C. McIntyre & Co.,
Alexandria Bay, Jefferson Co., N. Y.
One of the most interesting relics of olden times, on the St. Lawrence is the ruins of Fort Carleton [sic], on Buck's Island, called by the French Isle aux Chevreaux, about three miles from Cape Vincent and in the middle of the South Channel of the St. Lawrence. The area under the hill was completely protected by the works on the heights above, and from its great fertility afforded an abundance of culinary vegetables for the garrison. Traces occur showing that cannon were planted on conspicuous points and portions of a submerged Wharf is still to be seen, as are also wrecks of vessels on the bottom of the river adjacent. The Duke de la Rochefoucauld Liancourt mentions it as follows: During the American war the British troops were constantly in motion, and in later times they were quartered on an island which the French called isle aux Chevreaux, and which the English have named Carleton, after Lord Dorchester. The Island has been known to the French by this name from an early period, and it is mentioned as one of the stopping places of Count Frontenac, in his expedition against the Onondagas, as follows: "On the 26th of July, 1696, they took their departure, and encamped at Deer Island; on the declaration of war the guard was surprised and captured without resistance, the buildings burned and never after used as a fort.
No. 128. View of Fort Carleton, showing Bluff and Bay.
Publisher
A. C. McIntyre & Co.
Place of Publication
Alexandria Bay, NY
Date of Publication
1875
Subject(s)
Forts & fortifications
Local identifier
883
Language of Item
English
Geographic Coverage
Copyright Statement
Copyright status unknown. Responsibility for determining the copyright status and any use rests exclusively with the user.
Contact
Maritime History of the Great Lakes
Email:walter@maritimehistoryofthegreatlakes.ca
Website:
http://www.MaritimeHistoryOfTheGreatLakes.ca/ 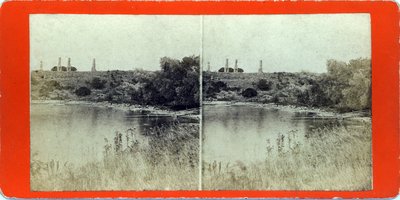