PROMPT as the morning’s mail comes more information about the schooner Ontario, as requested last week.

Captain John Williams, of 57 Isleworth avenue, veteran of sail and steam on the lakes since 1860, gives this vivid snapshot of the finish of one Ontario.

“I knew one of the Ontarios well. When I was young she was one of J. T. Mathews’ fleet, and Capt. Mike Troy sailed her. In fact I think he took her from Lake Ontario to the Upper Lakes when she was sold from down here. She used to unload in the Scott street slip in Toronto. She was a pretty little vessel.

“Later, the first year I had the Straubenzee, 1892, I took her to Lake Huron and the Georgian Bay to load timber. I saw a wreck on the shore near Mississagi Strait. She was lying on the southwest corner of Manitoulin Island, the east side of the strait, south of the lighthouse, and headed out, about southeast. The wind was light and we were just coasting along, so I thought I would have a good look at her. I got our yawlboat down and told the mate to pull our headsails down and drop the anchor if necessary, and two of us sculled over to the wreck. She was a little white vessel, and her hull was familiar, but her house had been washed away, her rail was gone, the paint was faded out, and her spars, although still standing, were all bleached and bare as though the wreck had been there two years or more.

“I pulled under her stern and in faint letters was the name ONTARIO. I don’t remember the hailing port, but I remarked at the time that she no longer had “of Toronto” there, as she had when I used to see her in Scott street slip. I thought of going aboard, but she was high out of the water and there was nothing to make fast to, and so we sculled back to the Straubenzee."

This vessel was not the Ontario built in Whitby in 1856, mentioned last week, but still another Ontario, built at South Bay in 1869. This one was 161 tons, 118 feet 6 inches long, 24 feet beam, and 10 feet depth Capt. J. D. Vanalstine sailed her at one time and J. T. Mathews, of Toronto, owned her. She was registered in Montreal. Another schooner Ontario built in Quebec in 1851 was owned by H. Waters, Chatham, Ont. in 1877, and there was a schooner Ontario hailing from Charlottetown, P. E. I.

The Ontario pictured last week, to which the anchor also pictured belonged, was a different vessel from all of these mentioned. Schooner Days’ good friend, Reeve Frank Morton, of Southampton, confirms the information another Schooner Days’ friend, Albert Leader, of Toronto, gave. This Ontario, he says, was built by Henry Marlton in Goderich for Frank Granville and William Spence. The latter was a son of Capt. John Spence, one of the founders of Southampton, and owner of the Nemesis, Wanderer, Ontario, White Oak, and several other vessels.

The Ontario narrowly escaped being named the New Dominion, for she was launched July 1, 1867, the first day of Confederation. Perhaps the fact that four other schooners registered under that name forced her back on her own province, at the expense of duplicating the name of the Ontario of Whitby.

The Goderich Ontario did not suffer thereby, for Capt. Frank Granville, of Chatham, her last and surviving owner, still possesses the flag presented to the schooner by Hon. Oliver Mowat, later Prime Minister of Ontario, on the first Dominion Day celebration, when she was launched. H. S. Turner, collector of customs and registrar of shipping in Goderich, contributes this information, and the additional interesting details that this Ontario was 105 feet in length, 23 feet in breadth, 9 feet 2 inches deep in the hold, and 150. 16 tons register; somewhat smaller, therefore, than the Whitby Ontario.

The Ontario had various changes in ownership.

Granville and Spence dissolved partnership later, says Reeve Morton, Granville keeping the Ontario and Spence taking over the White Oak. That would be in or about 1900. In the register of 1877 the Goderich Ontario is recorded as of 186 tons and owned by Wm. Seymour and Co. There was another Ontario in 1877, owned by D. C. Miller, of Maidstone, Ont., 78 feet long, 20 feet beam and 4 ft. 4 inches depth, registering 76 tons and hailing from Windsor. She was built at River Puce, Ont.

In 1910 the Ontario was running before a strong gale. She had a deckload of baled hay, straw and shanty supplies for the northern camps and was heading for the shelter of Chantry Island harbor of refuge just below the town of Southampton. Ahead of her was the Chatham - owned schooner Erie Stewart, also running for shelter. It was dark and blowing, and Capt. Granville could not see what happened, but the Erie Stewart poked her jibboom through the little range light on the end of the pier, and knocked the lighthouse down. All Capt. Granville knew was that he could not pick up his range to get under Chantry Island, so he tried to get the Ontario into the mouth of the Saugeen River, around which Southampton clusters. The schooner was under small sail at the time, only the staysail being set and that “squatted” or lowered somewhat so as to reduce its area. On nearing the river mouth the wind shifted and a gust came off shore. The Ontario lost headway and piled up in the breakers on the shore south of the present piers. And that is where her anchor was recovered in the dredging operations.

Capt. Granville is too young, Reeve Morton says, to have been in the steamer Kaloolah, wrecked at Southampton in 1860. The way she came to be wrecked was this: A timber schooner got ashore to the north of the Saugeen River, and the Kaloolah was brought to pull her off. The tow ropes fouled the paddlewheels of the steamer, and she was drawn up at the Bogus dock, south of where the pumping station stands, to have them cleared. A southwest gale arose, and the Kaloolah, lying in an exposed position, tried to escape into the nearby river-mouth. It was only a matter of a few hundred yards, but apparently her wheels had not been freed from the ropes which crippled them, for she failed to make the river entrance and was wrecked.

Another friend of Schooner Days, “Cap” W. L. Smith, rather takes us to task for saying the Kaloolah carried the Canadian Red River Expedition in 1857, when she got ashore on Michipicoten,

“You are a bit foggy in your history, brother, ” says he, “or else I am somewhat dull of understanding. The words ‘Canadian Red River Expedition’ are generally understood as applying to Wolseley’s force, which was sent to Fort Garry for the suppression of the first Riel Rebellion; and that force was despatched in 1870. As a lad I saw one train load on the way to Collingwood to board the steamer. ”

Quite so, old friend. But the first Red River Expedition was thirteen years before that. This was in 1857, and it was a peaceful exploration party, and is said to have produced the first map of the “fertile belt” of the great Canadian NorthWest, as described and delineated by Prof. Henry Youle Hind, geologist to the expedition. This map was printed in the Imperial Government blue book in 1860. The illustration printed last week, of the Collingwood, as the Kaloolah had been renamed, on the rocks, was a drawing by John Fleming, assistant surveyor on the expedition.

Coming back to the Ontario's anchor, which started all this after being dredged up at Southampton and getting into Mr. Robert Murphy’s garden, Mrs. George Kinchen. 85 South Oval, Westdale, Hamilton, writes C. I. Radford, our waterfront standby, thus: —

“When reading The Telegram of Saturday, 10th, we were interested in an anchor and ships that were very old.

“Now, when the S.S. C. W. Cadwell, a sand-sucker, was pumping sand at the mouth of Niagara-on-the-Lake, they discovered something heavy, and getting it to the surface,

“Is there any way we can find out what year it was made, and what ship it was on. It is all hand-forged, and we know it to be very old. Any information you could give us would be very much appreciated.”

The letters and figures are marks stamped into the anchor by the makers when it was red hot, for the purpose of identification, and possibly certifying its weight. The latter was usually given in hundredweights, quarters, and pounds, although the figures in this instance do not look like this. Perhaps some foundryman will recognize and translate them for the lady.

Brock Macaulay, of Southampton, standing by the Ontario's anchor as in the witness box, says: “The night the schooner Ontario was wrecked, the schooner Erie Stewart was also wrecked. The Erie Stewart made a mistake; instead of going in the Gap they smashed into the dock and knocked her spars out of her and also knocked over the lighthouse. Capt. Granville with the Ontario came along after the Erie Stewart had knocked the lighthouse over and could not find the Gap. Then he tried to make the Saugeen River, but could not make it and struck the beach.

“I understand the captain on the Kaloolah when she was wrecked was Capt. Thorburn.” 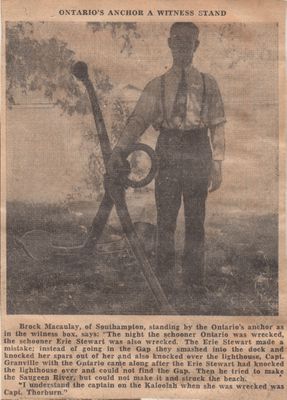