William H. Marsh, of the ship chandlery firm of McCarthy & Marsh, died yesterday afternoon at his home, 103 East Seventh street. he had been in poor health for some time, but ten days ago he was obliged to take to his bed. Born in the Second ward about sixty-seven years ago, Mr. Marsh had lived here all of his life.

In his youth he became a sailor, and for a number of years was with Captain Jack Brooks in the schooner Shaw. He also sailed with Captain Moore in the brig Craft. About 1868 he entered into a copartnership with James H. McCarthy under the firm name of McCarthy & Marsh, and besides carrying on a general ship chandlery store they bought and sold wet grain and junk.

In the past Mr. Marsh was interested in lake schooners, owning an interest in the Daniel G. Fort, American and Houghton. He was for years a member of the Church of the Evangelists and served as warden and vestryman. In Masonic affairs he took a deep interest, being a member of Frontier City Lodge No. 422, F. and A.M., Lake Ontario Chapter 165, R.A.M., and Lake Ontario Commandery No. 32, K.T.

He served as Alderman of the Fourth ward for two terms in 1885-6, and had always taken a deep interest in public affairs. he was a good citizen and held the respect and esteem of the community. Besides his widow he is survived by a daughter, a brother, John Marsh, and a half sister, Mrs. Thomas Cauley, all of this city. 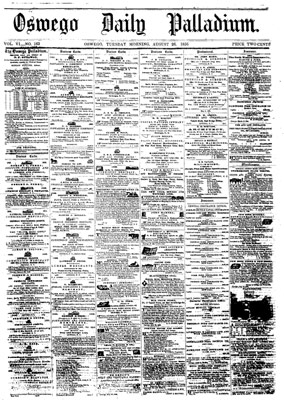