The steamer Matoa of the Pittsburgh Steamship Co., released by the Reids at Point aux Barque, Lake Huron is also awaiting for Reids dock.

The lumber steamer Edward Buckley is at Oades drydock, Detroit, for repairs, having sustained about the same injuries as the Rhoda Emily, having also been driven ashore at Harbor Beach, on November 9th.

The steamer Peck, damaged at Racine last summer, caused by her boilers exploding, is also at the Great Lakes Engineerings [sic] company's works at Detroit, and is being rebuilt and shortened to pass Welland canal locks.

The steamer Arcadian [sic: Acadian], released by the Reid Wrecking Co. at Sulphur Island, Thunder Bay, Lake Huron, was brought to the Great Lakes Engineering works, Detroit, for repairs amounting to $98,000, and mostly all bottom work.

The Great Lakes Engineering works, Detroit, is also rebuilding the lumber steamer, Rhoda Emily, owned by Milwaukee parties and the yard gives the approximate cost of rebuilt to this little steamer at $20,000. The Rhoda Emily went ashore in the harbor of Sand Beach in the storm of November 9th, when a large portion of the breakwater gave way.

The steamer I. W. Nicholas was taken to Port Huron by the Reid Wrecking Co., Jan. 24, which breaks all records for winter navigation on Lake Huron. The Nicholas went ashore last fall on North Point, Thunder Bay, near Alpena, Mich., and after several unsuccessful attempts of the wreckers to release her from the reef, broke in two. Her cargo, consisting of 175,000 bushels of flax-seed, was all that saved the steamer, as the wet seed around the break formed as hard as cement, and acted as a water-tight bulkhead. The Reids renewed their contract with the Insurance company and riveted four plates across the break and finally released the Nicholas and brought her into Alpena. Milwaukee parties bought the Nicholas' cargo, which was unloaded before the trip to Port Huron was attempted. This stunt gives another laurel to the Reid Wrecking Co. who have succeeded on some wrecks that seemed impossible and were in many cases given up by others. The Nicholas is now awaiting a chance to enter dry dock for survey, as this steamer was only insured against total loss. 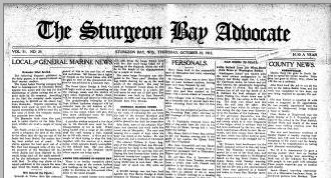