CAPT. JAMES QUINN of Oakville--"Oakville Quinn" on the waterfront distinguished him from Capt. James Quinn of Toronto—-was proud of his native port at the mouth of the Sixteen Mile Creek, and Oakville was proud of him. "Oakville oak to the pegs of his boots" was the. town boast.

It was a big step-up for Capt. Jim, or anyone else, to become master and part owner of a "full canal-sized three-'n'-after" like the Jessie Drummond, along about 1900, and all Oakville rejoiced.

When Capt. Edmunds of Port Hope had had the Jessie Drummond or Capt Dan or Capt Hugh Rooney of Cobourg, she was always painted a plain black, or sometimes black top and green bottom. Capt Quinn gave her a scarlet petticoat in token that he was going to scald the lake with her. Black above and red below was his favorite color scheme. He used it in the little Highland Beauty, when he had her in the stone trade, with the gilded galloping horse on her jibboom end, and he transferred it to the larger White Oak, for whose mainsail he scorned reefpoints.

Jim was a sail-dragger, and famed for fast passages. With him walking the cabin-top the Drummond, now "going on for forty" blossomed forth again with fancy kites like blue-devils and fly-by-nights and water-sails, and fourteen-hour passages to Oswego became the talk of the Toronto waterfront. Old hands grumbled "He's come ahead too fast." Whether they meant it financially, or referred to the Drummond's speed, there was no doubt they envied Jim's prosperity and the $2,400 savings he accumulated, with the Drummond's help, in the little old private bank back home. Nor were they appeased by his brother, Nipper Quinn, buying the F. F. Cole of Picton, and keeping her "painted like a yacht," though engaged in stone-hooking.

When she was launched in 1864 the Jessie Drummond must have been the finest Canadian barquentine on the Great Lakes. That claim is often made for many, but this one is backed by Thomas' marine register for that year, which gives her an insurable value of $19,000 and makes a special note that she has iron strap knees and other strengthening features and wire rigging, then a novelty on the lakes and at sea. The insurable value was the highest accorded any Canadian. The Drummond was just as big as could be got through the Welland Canal, and she registered 391 tons in Thomas' record, which would be slightly higher than Canadian measurement. She rated in the highest class for the lakes, corresponding to A-1 at Lloyds.

There were forty-five Canadian barquentines on the lakes in her year, and one hundred and twelve Americans. This rig, square on the foremast and fore-and-aft on main and mizzen disappeared from the lakes fifty years before the last three-masted schooner vanished. The Drummond, from her new style of rigging and strengthening iron work had an insurable value of $3,000 more than other Canadian vessels of her year and tonnage. She was strongly, but not too heavily, built, of fine white oak, four-inch planks for her sides and five for her bilges. She was square-fastened, through- fastened, and edge-bolted.

Melancthon Simpson was the master carpenter who put her together, and Ross and Jackman of Toronto were her registered owners in her first year. St. Catharines was her building place, but in Toronto she was owned and from Toronto she sailed.

The Drummond family of Montreal were probably original shareholders as well, judging from her name. Reford and Co. of Montreal were the shippers of her outward cargo when she crossed the Atlantic.

Capt. Henry Jackman of Toronto took her to Hamburg in Germany for a cargo of railway iron for Canada in 1865, with a salt water navigator who became indisposed. In his indisposition the Drummond encountered a series of gales, and Capt. Jackman, following lake practice, kept her before wind and sea until she had run a thousand miles off her course. Lake sailors preferred to scud rather than to heave to, because on the lakes scudding would bring them to shelter somewhere soon, whereas heaving to had the danger of the ever-present lee shore.

When the navigator got around he had a lengthy task getting the Drummond back to where she should have been. The voyage was a slow one, taking a year, and Capt. Henry's brother Frank, who had started for Port Natal in the smaller brigantine Sea Gull from Toronto about the same time, was back from South Africa ahead Of the bigger Drummond from Europe.

BUT that was not because the Drummond was a dull sailer. She had a good model, unusually good for an "Old Canaller." Her forefoot was rounded, even above the light waterline, and her bow though bold was far from boxlike, "pushing the water ahead of her like a steamboat." She had a clean run, and her quarters rounded in, making her transom eliptical.

Capt. Robt. Maw of Toronto sailed her after Capt. Jackman brought her back to the lakes and her rig was changed from "barque" to schooner. Schooner Days never saw her in her barquentine rig when she was painted white, and her profile was blurred rather than adorned with a gilded figurehead carving. When she came into his ken she was black, the upper part of her stem was plain and straight and her barquentine rig had vanished, to be replaced by a loftier foremast, with a long fore-topmast, to give her enough fore-and-aft sail to make up for the shearing of her square pinions. This rig, making the foremast loftiest of all, is never pleasing in a three-masted schooner, but the Drummond sailed well in spite of it. Capt. Maw had a squaresail and raffee for the Drummond. These were later discarded and all her sails were fore-and-aft as mentioned last week. She went ashore on Capt. Maw once at Oswego, lumber-laden, and was swept clean of her cabin top, but she was got off without material damage and sailed the lakes for another twenty years.

Now we leave the Drummond for a bit to follow the further fortunes of the Sir C. T. Van Straubenzee under Capt. John Williams. The Straubenzee was built ten years later than the Drummond, but their courses often crossed after the Drummond came back to the lakes, until—-

You shall hear next week.

THE JESSIE DRUMMOND as she went to Hamburg for iron rails in 1865.

THE JESSIE DRUMMOND as Capt. Maw had her in the 1880's after she had parted with her barquentine rig. She was yet different when Capt. Quinn got her, as next week's pictures will show. 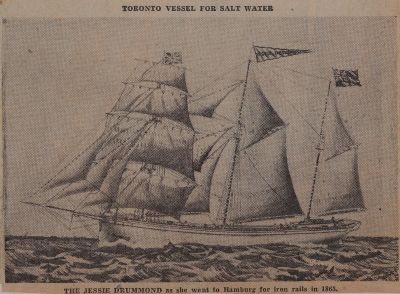