CRUISING the Bay of Quinte this summer this summer the ketch Kingarvie came to anchor one desperately wet evening in the cove where was born the three-masted schooner Pacific, sixty-seven years before. Roblin's Cove, Sophiasburg, Prince Edward County, was the spot and the year was 1874.

There was nothing on this last evening in August, 1941 to indicate that the deserted place was once a buzzing hive, except the over-brimming rainwater crashing down the high bank in a foaming torrent.

This had then been the spillway from the pond above, which turned the wheels of three mills. The stones of the old gristmill, ironbound, were buried in the grass at the top of the bank, and by searching one could find the sites of the two other mills — sawmills. The only other trace of the cove's industries of seventy years ago was the walls of a store, which had once sold everything from needles to anchors, for a little community which built a dozen schooners, freighted them with lumber, flour and barley, and sent them on daylight runs to Oswego, or yearlong voyages to Liverpool or Brazil.

The Pacific was one of the long voyagers. John Tait, of the Taits of Tante (Amherst Island) was her master builder, and her original owners were C. S. Wilson and the Collier Bros, of Picton, who built many schooners for others to sail. It appears that this one was part of a speculation, it being the intention to build two vessels, the Atlantic and Pacific, for the growing grain trade. The Atlantic hung fire, or the sale of her did, and after some delay she was launched as the W. R. Taylor and rebuilt and lengthened later as the Stuart H. Dunn.

The purchasers of the Pacific were Capt. John Ewart of Cobourg and some enthusiastic fellow townsmen, R. Mulholland, R. J. Winch and George Guillet. Her arrival in Cobourg was signalized by the brass band marching down to the wharf and a town banquet being held upon the Pacific's new "spacious decks" as a contemporary newspaper described the function. She was the finest combination of Prince Edward County white oak and Sophiasburg blacksmith iron Cobourg had ever seen, and her price, $24,000, marked a new high for canal type schooners, that is vessels intended to use the Welland Canal and so trade to the farthest reaches of fresh water.

The abattoirs and packing plants destined to crown Chicago as the Smoky Porkopolis of last century were at this time swinging into action after the great Chicago fire and accumulating great quantities of bones — including buffalo skulls —from the cattle of the western plains. Enterprising Englishmen were finding a use for the bones, for glue or fertilizer. The schooner C. G. Trumpf of Toledo — just plain Trumpf to lake mariners — had taken a cargo across the Atlantic from Chicago to Liverpool, and Capt. Ewart was offered a similar charter for his new Pacific. Lake schooners half the size of the Pacific made ocean voyages then. The Sea Gull of Oakville went to South Africa. Others went to England, Germany, Russia and even India. One or more went around Cape Horn in the California gold rush.

The Trumpf came back smelling to heaven after her bone cargo, and unable to get grain freights - the gold dust of the 1870's - until she changed everything, from her name to her night shirt. She became the Arthur. Forty years later, in the Great War, she shook the freshwater barnacles off her bottom and went back to the ocean. She is said to have made three round trips between Halifax and South Africa with lumber.

Warned by Trumpf's trouble, Capt. Ewart thriftily bought pine lumber in Chicago, where it was piled on the wharves as high as the cross-trees and lined the Pacific with it from stem to stern. It was quite impossible for bones, smells or maggots to soil the unstained ceiling of the Pacific, and with her cargo under hatches she still looked the lake queen that she was — shining white above with green stripes and gleaming red below. She had a good passage down the lakes and St. Lawrence, and good weather across, and struck luck on the other side. Export trade was booming in Britain and they wanted all the wood they could get for packing cases. After the last bone had left the Pacific's hold Capt. Ewart ripped out the thousands of feet of pine sheathing, and sold it for more than his total freight on the bone cargo!

His hold was sweet and clean, and he got a charter to load in Brazil for New York. One recollection is that it was for nitrates that he took the Pacific across the equator, and another is coffee. Very likely the latter, as he was to load for New York. He "crossed the Line and all went well," but he ran into his doldrums at the loading port. The crew didn't care how long he was delayed, and they refused to work cargo, that is, help get on board and stow the cargo which was brought out in lighters. So Capt. Ewart had to hire a gang of black stevedores. To avoid being left without a crew to work the ship herself when she was loaded he laid charges of mutiny against the mutineers, and had them all boarded at the county jail while the darkies did their work. When the Pacific was loaded he expressed his willingness to withdraw the charge if his lambkins were ready to return to the fold. After a few weeks of the calaboose the Pacific looked like a palace to the mutineers, and they gladly walked the capstan round, got up anchor and hoisted sail for home.

But when they got to New York, a sea-lawyer told them their "rights" and they had Capt. Ewart arrested. He was released on bail, and, on the advice of another sea-lawyer, went home to Canada and sent his son, James, back to bring the Pacific around. Jim got a freight of coal, for Newfoundland and sailed aw7ay without interference. But in thick weather, snowing and blowing hard, the Pacific struck on the rock-bound coast—and that was the end of $24,000. Captain Jim and his new crew were saved.

ROBLIN'S COVE in the Long: Reach of the Bay of Quinte, The small stone shed shown above the old wharf is the only evidence of the cove's former activity. 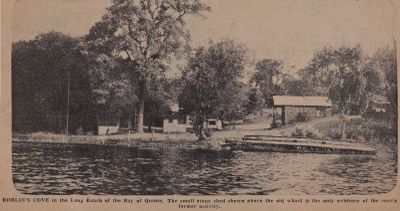